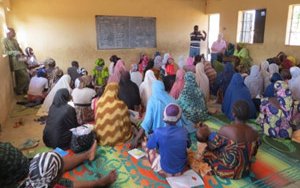 The Americans should pay attention to the fact that while concentrating on rescuing the girls, it is important to provide other non-military services that will unite local communities rather than divide them.
In the 1970s and 1980s, at the height of Nigeria’s post-oil-discovery wealth and power, Nigerians could walk the streets of the major northern cities of Kaduna, Jos, Kano and Maiduguri without a concern, unhurried and unharmed. Today, public spaces, from churches to restaurants and cafes in these cities send very real frissons of fear down the spines of everyday people, a fear unassuaged by the decidedly ineffective security apparatus. As Wanjohi Kabukuru, a veteran Kenyan journalist writing for NewAfrican Magazine puts it, ‘these cities have lost their innocence’. Thanks to Boko Haram, a militant group terrorising Nigeria’s north eastern region, those cities have lost their innocence forever.

Records show that since 2009, Boko Haram has been orchestrating a vicious circle of violence in the north-east; violence that has led to the death of over 3,000 people. The abduction of 276 female students from Chibok Government Girls Secondary School on April 14, 2014 represents the height, thus far, of its achievements. The ‘night Chibok’s name entered world history is not one that any of the abducted girls or any of their close relatives will ever want to remember’.

And yet how can they ever forget it? The speed of the #BringBackOurGirls Campaign and the sheer audacity of Boko Haram propelled the American intervention intended for the rescue of the stolen girls. Initially, the American intervention inspired a sense of hope and genuine expectation in an atmosphere already invaded by despair and desperation, particularly around Chibok. The snail’s pace of the Nigerian government forced some parents to organize their own search. One of the parents declared, ‘All Nigerians are civilians, Americans are the real soldiers.’

As a result many Nigerians have a slightly less rosy perception of the American intervention. Bunmi Olusona, a social commentator based in Lagos argues that the United States and most European countries do not have impressive records in terms of intervention, especially in Iraq, Afghanistan, Somalia, Congo; on occasion, those interventions have ended up precipitating civil wars.

Some suggest that this particular intervention could be a way of realizing the prediction in a report by America’s National Intelligence Council – that Nigeria may disintegrate as a united country by 2015. The report surfaced in 2005 but was later denied by Washington.

In addition, some Kaduna based clerics argue that the American intervention in the Chibok case will simply pull further at an already polarised society. They are already calling the American intervention an invasion of Islamic territory by “Christian crusaders” from America, why were the Americans not invited when the Niger Delta militants were plundering Nigeria’s oil resources? Like President Yoweri Museveni of Uganda, some said, ‘it was not only humbling but a thing of shame for mere fundamentalists to reduce Nigeria to a nation of beggars for foreign assistance’. In other words, if Nigeria’s vast resources were properly managed, and there was no need soliciting for outside help, perhaps, the conflict would not have emerged in the first place.

While the American intervention continues to divide opinions, it is necessary to concede that northern Nigeria remains the poorest region of the country. Poverty rates are rising while the high degree of illiteracy is not declining. Recently, evidence suggests increasing levels of desert encroachment, deforestation and internal migration, in addition to corruption, lack of motorable roads and poor communications.

As such, attention must be given to local peace initiatives ongoing in the region. Worthy of mention is the Wauru-Jabbe/Kofare Peace and Development Initiative in Jimeta-Yola, Adamawa State. This programme targets men and women from all backgrounds who have lost out on western education. They are taught how to read and write, including training on the use of computers, internet and other mobile services to enable them participate effectively in Nigeria’s fast changing economy.

The initiative was started by Rev. Sr. Agnes Hannon, an Irish Nun of the Mercy Sisters congregation living and working in Yola, Adamawa State. The programme began in Kilbaji village in Wauru Jabbe in 2005 meant to amalgamate other villages as locus for development, dialogue of life and peace initiative.

Following the intensity of the Boko Haram conflict, the team carried out a “Listening Survey” to surface the burning issues affecting the community. In addition to the greater problems of poverty and health care, the programme was reshaped as the Peace and Development Initiative. This was meant to achieve peaceful co-existence as well create opportunities that will accommodate those who feel excluded and may be tempted to join violent groups.

In addition to the leadership position of the coordinator and the proactive role of the ‘Christian and Muslim Youth Foundation’ (motto: United we Stand), the programme is structured into two categories, the adult literary school and the computer training. The adult literacy school has almost 500 adults (both men and women), 15 part time teachers and 2 part time administrators. There is a basic literary of four years (mostly taught in Hausa Language) and a post-literacy period (taught in English). Classes are 2 hours long, 3 days per week. The optimum time for learning is January to July as there are many interruptions during the farming season. Certificates are awarded by the Adamawa State Agency for Mass Education.

The second part of the programme is the computer  literacy training. This is intended to train people on the use of computers, mobile banking systems to enable them have access to knowledge of formal economies, to participate in these economies and better their standard of living. Certificates are offered in typing, general computer knowledge, and a Computer Diploma. The course lasts 3 months. It is a project with great potential in turning around means of livelihood, making terrorism less attractive and allowing them participate in the ever changing Nigerian economy. Already, lives are changing!

Thus, as a matter of policy, the Americans should pay attention to the fact that while concentrating on rescuing the girls, it is important to provide other non-military services that will unite local communities rather than divide them. Again, there are non-violent Islamic movements littered around northern Nigeria. No attention is paid to the indiscriminate ideological propaganda spread by these groups. Policies will begin to be constructed only when they turn violent. It seems clear that there is need to check them during this incubation period. Programmes such as the Wauro-Jabbe/Kofare Peace and Development Initiative should be part of American intervention. Even if Nigerians are not real soldiers, they could be real peacemakers. 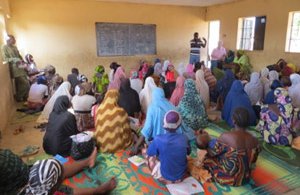