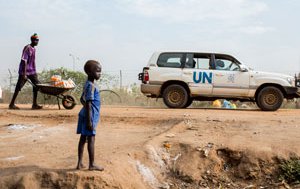 The opposition group led by former Vice President Dr. Riek Machar went to civil war against the South Sudanese government on 15 December 2013, soon after the internal political debates aimed at reforming the governance system in the country. The civil war has since claimed thousands of lives, forcing citizens to flee the country to its immediate neighbours Uganda, Kenya, and Ethiopia. The mediation process designed to halt the crisis has been under management of Intergovernmental Authority on Development (IGAD) since January 2014.

At the beginning of the peace talks - held in the Ethiopian capital Addis Ababa - only three IGAD countries were involved in the mediation, with support from the international community serving as observers. Following the collapse of the peace talks in March 2015, IGAD’s process has been expanded to include a coalition comprising USA, UK, Norway, Italy, the EU, the African Union Commission, the UN, and the African Union high-level committee including Nigeria, South Africa, Rwanda, Chad, and Algeria. The talks also crucially involved South Sudanese stakeholders comprising community leaders, civil society representatives, women leaders, political parties, and political leaders from the Sudan People’s Liberation Movement.

The peace agreement was signed by the two sides on 17 and 26 August 2015 in Addis Ababa, Ethiopia and Juba, South Sudan respectively. Celebrations have been seen across the country as the two warring parties exerted their efforts to end the suffering of the citizens in the World’s youngest nation.

The agreement signed by the conflicting parties in South Sudan awards different percentages to each party, on power sharing deal, the government will have 53% at the national level while the opposition group under leadership of Marchar will obtain 33% the balance of 14% will go to the political parties and the former political detainees.

However, despite public celebration and tentative optimism from international observers, the peace agreement is extremely fragile, casting doubt over the prospects of long-term security and stability in the troubled nation. The security arrangements provisioned in the agreement for the immediate period after signing demanded that government and opposition forces be redeployed outside a 25km radius around Juba. A troubling factor to consider is that during the transitional period, South Sudan will effectively have two armies, with President Kiir in command of the South Sudan army and rebel leader Machar retaining control of his forces until the two are unified. While the two militaries remain under separate command, the ceasefire will likely remain compromised.

Less than one month has passed since the signing of the peace agreement and already the forces of the warring parties have violated the ceasefire; exchanging clashes over the past few weeks.

Despite the violence that has marred the ceasefire and threatens the fragile peace in South Sudan, the government appears to be serious on the implementing the provisions of the accord. The executive cabinet has formed a committee dedicated entirely to checking the implementation of the peace deal, while President Kiir’s decision to sign the deal was hailed as a momentous act of diplomacy and compromise by the public and international observers alike.

It is imperative that the peace deal in South Sudan not fail. The country has been independent from Sudan for four years now, and in that time has suffered from civil war, an ongoing refugee crisis, and famine. The effort required to bring the two parties to the negotiation table after 20 months of civil war must not be in vain.