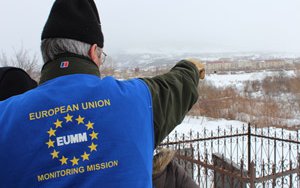 Image credit: George Gorgo
'People to people peacebuilding' has seen some success in Georgia
People of all ages are playing together in a tree-filled city park, accompanied by cheerful music and birds flying overhead. It’s a vibrant public space, and it forms the setting of the new online game Peace Park.

From my bird’s eye view, I fill the park with different combinations of swings, benches, chess boards and other play structures, keeping one eye on the cost of each item. My goal is to make sure every park-goer is satisfied. The game’s designers, however, have a greater goal: to help build peace in the South Caucasus.

Since the collapse of the Soviet Union, Georgia has experienced armed conflict over the status of Abkhazia and South Ossetia. The two regions are internationally recognized as part of Georgia, but both claimed independence in the 1990s and are dependent on Russia.

War in Georgia broke out most recently in August 2008. After peace plans were signed, the international community established the Geneva Talks to address security and humanitarian issues in the region, as well as generally improve relations between Russia, Georgia and the de facto officials in Abkhazia and South Ossetia.

But more than six years and 31 sessions later, the talks have made little progress.

What’s known as people to people peacebuilding, however, has seen more success. The idea behind this unofficial peacebuilding method is to bring people from groups in conflict together in a safe space where they can interact, work together, build relationships and develop mutual understanding.

But in Georgia there are real barriers to this. Ethnic Georgians’ ability to cross Abkhazia’s administrative boundary line, manned by Russian border guards, is extremely limited. A new online game is helping to bring people together across the dividing lines in Georgia. Image credit: International Crisis Group.

South Ossetia’s boundaries have recently become more concrete. Since the 2008 war, the guards have built barbed-wire fences along parts of the administrative boundary line, dividing communities in the process. In areas where the boundary is unmarked, farmers and locals who cross into South Ossetia are often arrested and fined.

This is where the virtual world comes in. Peace Park is a cooperative game that gives youth on either side of these boundaries a space to interact in the online world. Elva, a Tbilisi-based organization, worked with local game designers to build the game with support from the EU and UNDP.

Peace Park is attracting attention. It won an honorable mention from the United Nations Alliance of Civilisations’ and UNDP’s PeaceApp competition, and the creators even recently spoke about the game in Georgia’s parliament.

The growing movement of developers for peace

The potential of gaming to contribute to peacebuilding stems from its global popularity
The idea of using digital games to incentivise interaction between communities is not unique to the Caucasus. Elva joins a growing movement of those who believe games can promote social change. As well as creating Peace Park, Elva organised a series of online gaming sessions based on ones organised by the Israel-based Games for Peace.

Games for Peace, founded by Uri Mishol and Dudi Peles in January 2014, organises weekend programs to bring gamers and children from across the Middle East together to play Minecraft, a lego-like video game where players build constructions out of cubes in a 3D virtual world.

In an interview with i24news, Mishol said Games for Peace uses Minecraft because it was creative and non-violent. And it seems to work. Once kids of different religions, ethnicities and nationalities start playing together, he said, it’s all about the game.

The potential of gaming to contribute to peacebuilding stems from its global popularity. In a 2010 TED talk, Jane McGonigal, a game designer and author of the book Reality is Broken: Why Games Make Us Better and How They Can Change the World, points to the example of World of Warcraft. At the time of her talk, gamers had collectively spent nearly six million years on the game working together to solve virtual challenges. She argues the gamers have built tight social bonds while doing so.

So why not use the draw of online games — and the communities that form from them — for social good? After all, Peace Park may be just a game, but our virtual worlds can have real-world impact.

Heather Yundt is a Canadian freelance journalist and editor based in Tbilisi, Georgia. She writes in particular on humanitarian issues, international development, social justice, sustainability, and innovation.
Read more from Heather Yundt 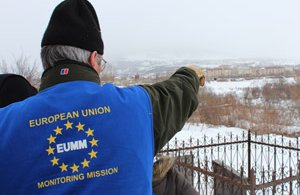