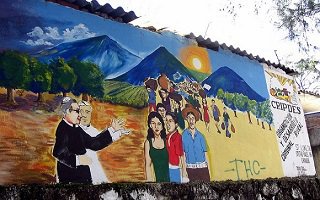 Oscar Romero was a human rights activist and religious figure in El Salvador who is celebrated and remembered as a central figure in the struggle for peace. Image credit: Alison McKellar

The struggle for memory in El Salvador

In El Salvador, a struggle over the memory of civil war unfolds on blank plaster.

On Christmas Day 2011, Salvadorans awoke to discover a heap of rainbow-coloured rubble at the foot of the National Cathedral, in the capital, San Salvador. Lying outside the now-whitewashed Cathedral were the remnants of Harmonia de mi pueblo - or harmony of my people, a mosaic tribute to peace by Fernando Llort.

The Archbishop of San Salvador had ordered it to be destroyed. Residents angrily accused the conservative Archbishop of denying the people’s victory over war and repression. In August 2013 another piece of art disappeared, in the community of El Paisnal. A mural depicting peasants dining with Oscar Romero and Rutilio Grande, two central figures in the opposition to government-sponsored killings, was erased on the order of the parish priest.

Salvadoran society remains strongly divided along the lines that marked the country's conflict
Members of the Romero House community for refugees in Toronto, including myself, recently made a pilgrimage to El Salvador, to mark the thirty-fifth anniversary of Romero's assassination. We visited El Paisnal, where the town's youth leader spoke proudly of his peers' plans to repaint the mural elsewhere, in the hope of preserving the memory of the resistance of Rutilio and Romero. While browsing Llort’s workshop in the capital, we heard theories that corporate interests and conservative Catholics had conspired to destroy his mosaic, a symbol of the people’s resiliency.

These encounters demonstrate that Salvadoran society remains strongly divided along the lines that marked the country's conflict, from 1980-1992, which claimed more than 70,000 lives. And when it comes to inequality and class, wartime struggles are alive and well. The main combatants in El Salvador’s civil war continue to fight for power today. The FMLN and ARENA, two current political parties in El Salvador, are filled with ex-rebels and military folk who have traded combat uniforms for business suits.

And El Salvador is struggling. The country regularly records the highest murder rate in the world. It attracts little foreign investment, and gang violence and the abuse of women are rife. The situation appears worse than when I visited seven years ago to conduct volunteer work. Homes are more fortified, armed guards more visible.

The prevailing narrative identifies these ills as the legacy of the civil war: the frustration of a lost generation, leading to a cycle of exclusion and crime. Nevertheless, as I journeyed through El Salvador, I was struck much more by the civil war’s hopeful legacy than its gloomy one.

We first visited CORDES, a local NGO promoting small-scale agricultural development and the empowerment of women, in dozens of communities across the country. CORDES was founded in 1988, in the midst of the civil war to meet the basic needs of the suffering population. Today, it carries on in the spirit of accompanying the country’s poorest and most isolated populations, who were disproportionately targeted during the civil war and continue to suffer most from the conflict's impact. For CORDES, peacebuilding is capacity-building; vanquishing poverty is vanquishing war. CORDES is a local organisation working to prevent conflict in El Salvador by meeting the basic needs of the suffering population. Image credit: Chemonics Fomilenio

We then visited Marianella, a community in which CORDES works. It is named after Marianella Garcia Villas, the director of the Salvadoran Human Rights Commission who was assassinated in 1983. Like Romero and Rutilio, Marianella may have been silenced, but she has come back to life among the Salvadoran people. A well-organised youth committee operates a radio network in the community, and volunteers work hard to ensure that the health clinic meets the needs of locals, despite chronic supply shortages. Marianella is a symbol of the civil war not for its poverty, but because its existence repudiates the hopelessness with which many characterise the post-war period. It’s a fitting tribute to the woman it memorialises.

Memories of the civil war were at the forefront of our subsequent visit to CRIPDES. Formed in 1984 in order to assist refugees and displaced persons, CRIPDES today promotes the organisation of communities in favour of a deeper peace and more inclusive development. On this day, we learned of CRIPDES’s efforts to organise communities in opposition to mining projects that allegedly threaten to destroy El Salvador’s already meagre water supply. Ominously, activists have accused the mining companies of conspiring to assassinate community leaders opposed to their projects. CRIPDES’s close work with communities in the face of such alleged danger exemplifies the way in which the present-day social justice movement draws its analysis, inspiration, and tactics from the civil war era. Brilliantly coloured mural paint the history of El Salvador. This depicts Oscar Romero outside the offices of CRIPDES in San Salvador. Image credit: Sean Lynch
Here, real progress is coming from within: the legacy of the civil war lives on for the better
We came closest to the realities of contemporary El Salvador when we visited Colonia la Chacra, one of the poorest sections of San Salvador, upon the invitation of the nuns working there. After enjoying an abundant, traditional, home-cooked lunch, the sisters regaled us with stories about close encounters with the gangs that effectively control the community.

Although we heard tales of tragic violence, it appeared that the sisters’ tireless grassroots work is paying off: they have won the respect of the gangs, to the point where the gangs have asked them to serve as an intermediary with the authorities, and to organise life-skills training for their members - also meaning that we could tour the community safely. Working from their small house in La Chacra, the nuns are carrying on the tradition of Romero and Rutilio, accompanying the vulnerable, even if it means living with the constant threat of violence. This way of life starkly contrasts with the sporadic populist interventions in La Chacra by politicians looking to gain votes by repaving a road here, improving signage there. Here, real progress is coming from within: the legacy of the civil war lives on for the better.

In El Salvador, blank plaster does not herald amnesia. Rather, it has prompted the locals to redouble their efforts to remember that they survived unspeakable atrocities, to honour those who disappeared, and to work towards a better future. Although some of the most beautiful physical monuments to the war’s hopeful legacy have disappeared, Salvadorans are remembering the war, serving communities and invoking figures like Oscar Romero in doing so. The work of CORDES, CRIPDES, the nuns, and thousands of other Salvadorans are demonstrating that the conflict left a spirit of solidarity that has stood the test of wartime devastation and post-war impunity. This spirit is the true legacy of civil war.

El Salvador may appear troubled - even hopeless to some - but take a close look at what’s happening on the ground, and a brighter future clearly lies ahead.

Salvator Cusimano lives and works at Romero House, a community for refugees in Toronto. He holds an MSc in Refugee and Forced Migration Studies from the University of Oxford, and a BA in Peace and Conflict Studies from the University of Toronto.
Read more from Salvator Cusimano
Disclaimer: The views expressed in this article are those of the author and do not represent the views or position of Peace Direct. 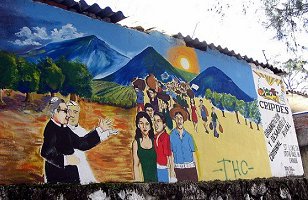