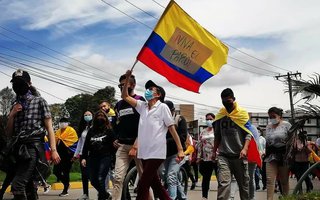 At night, me and my daughter read bedtime stories. This week we listened to a story about a selfish and spoilt princess who loses a ball that her father had given her. The ball had fallen into a deep well and the princess was sad that she couldn’t get her toy back. Seeing that the girl was sad, a little frog who lives in the well tells her that he will rescue the ball if the girl promises her that they will be friends. The girl accepts, but when she has recovered her ball, she forgets what she agreed to. The frog is upset, and goes to the princess' castle to tell the king that his daughter has broken her promise.

This story has helped me understand why people in Colombia have taken to the streets to protest against the government. The crisis of governance that the country is currently experiencing, on top of the pandemic, has been fuelled by the inability of the government to fulfil promises that were made to Colombian society. These unfulfilled promises have breached trust between citizens and institutions.

Peace agreements, anti-corruption agreements, agreements to respect and guarantee the right to social protest, promises not to increase taxes: these are all agreements to which the country's leaders have committed themselves, after civil society demanded them in many ways, including through social protest. However, a year before the end of the current government, these agreements remain unfulfilled and disregarded. During the 2019 national strike, the government called on different sectors of society to participate in dialogue, the results of which were negative. Nothing that was mentioned during the dialogue was taken into account. Solutions weren't found and nothing was accomplished. This crisis of confidence is what is driving people to go out and demonstrate today. 47 victims have already been claimed, all of them young people. Over 400 people have disappeared and hundreds have been injured, among them young people in the national police and young people from indigenous groups.

The social chaos we are experiencing today is not the result of social protest; the direct responsibility lies with the central government and political leaders of the extreme right. In addition to failing to make good on their promises, they have underestimated the demands made for peacebuilding. They have instilled a narrative of conflict and hate, the consequences of which are clear: private armed groups organised in cities to attack demonstrators; carrying their weapons in front of the police, just like during the worst years of drug violence in the 1980s. The dynamics of paramilitary and para-state violence that for decades have brought rural areas to their knees have taken over the cities, putting an end to social mobilisation. Far from rejecting these acts, the government continues to stigmatise social protest. It invites dialogue, but does not stop to investigate police abuses. While it invites calm, Heads of Ministries continue to associate terrorism with the legitimate right to social protest.

The dynamics of paramilitary and para-state violence that for decades have brought rural areas to their knees have taken over the cities, putting an end to social mobilisation

The government has justified or explained away its failures through excuses or distracting data that doesn't explain the reality in the country, but rather a particular narrative that it wants to establish. This has generated indignation among the population. When people protested against the death of social leaders, the government's response was to criminalise the work of leaders. When people protested a tax reform that punished the middle class, the government called the reform "an act of solidarity". When the increase in massacres was denounced, the government decided to call them collective homicides. Protesters are called hooligans, minors, victims of forced recruitment, and "war machines". There are many reports of abuses by members of the police and the national army against civilians, and every time an unfortunate event occurs, the government comes up with another excuse to avoid seeking real solutions to structural problems.

The government has justified or explained away its failures through excuses or distracting data that doesn't explain the reality of the country, but rather a particular narrative that it wants to establish

The feeling of mistrust is exacerbated amidst social protest, when the state's first response is to deploy a violent and authoritarian response, without giving thought or space to the reasons behind people's mobilisation. Helicopters fly over cities hours before the demonstrations, containment groups are deployed throughout the streets, tanks, stun bombs and tear gas are used. It is all part of a strategically staged scenario to weaken the protest by turning it into a battlefield. With each protest that ends violently, the political class commits to strengthening a human rights approach involving training for the police and army. The results of these commitments remain to be seen. What we do know, however, is that the strategy to contain social protest in Colombia was designed with the support of an international advisor known for promoting anti-democratic strategies using violence, intimidation and creating chaos.

When the government decides to respond to social protest by using excessive force, it provokes an inevitable escalation of violence by civilians and members of the security forces. Protesters feel constantly threatened by the actions of those with a monopoly on force. Fear and intimidation can lead to violent reactions. The Colombian government is surely aware of this, yet it remains irrelevant to them as it does not fit with the warlike discourse under which they want to govern. Faced with a critical situation, the government's response has been to call on local authorities to militarise the streets, inviting other actors in the conflict to respond with violence as well, as opposed to trying to deescalate tensions. All of this could be avoided if the government were to adopt a preventive approach to social protest - one oriented towards dialogue and consultation, where the grievances of civil society and communities can be heard.

All of this could be avoided if the government were to adopt a preventive approach to social protest - one oriented towards dialogue and consultation, where the grievances of civil society and communities can be heard

The danger of being young in Colombia

For over five years, young people have been the ones leading social mobilisation in Colombia. They have strengthened it in hundreds of ways, creating independent media, platforms and spaces for collaboration. However, with each new mobilisation, the number of young people affected by violence also increases. In addition to the 47 victims of this protest, 13 young people died in Bogotá at the hands of members of the security forces in the marches that took place in 2020. There were more victims in the national strike in 2019. To make matters worse, social protest is not the only scenario where the lives of young people are threatened. This year alone there have already been three massacres in which children and young people were tortured and killed.

For over five years, young people have been the ones leading social mobilisation in Colombia

It is urgent that the international community knows how difficult and dangerous it is to be young in Colombia. They must help us to demand and monitor effective mechanisms to protect the lives of young people. The young people I work with continute to seek alternatives in international legal framework to denounce and condemn the systematic violence they face, but the options remain overly complex or unnatainable. Social networks have served to highlight serious situations, such as the one we are experiencing now, but the reality is that young people's human rights are consistently violated. Youth have no allies in the international community to help set a legal precedent or to sanction a government for crimes committed against this population.

It is urgent that the international community demand that the Colombian government put an end to the violence committed by security forces. They must also eradicate inflammatory language from speeches made by Ministers on a daily basis, condemning the Colombian population to live in a state of war and endless confrontation.

Colombians today seek the support of the international community as mediators and guarantors of a constructive, conscious and honest dialogue that for once meets the needs of Colombians and is a step towards achieving the transformations that we urgently require. Too much pain, anguish and death has led us to seek out opportunities for dialogue so that we can safeguard people's lives. However, the options for dialogue offered by the government do not involve a change in discourse, do not take responsibility for their actions, and do not consider the option of external and impartial mediation to reestablish back confidence in the government. The government has never committed to a genuine message of peacebuilding and reconciliation, and until it does, its capacity for dialogue is minimal.

Colombians today seek the support of the international community as mediators and guarantors of a constructive, conscious and honest dialogue that for once meets the needs of Colombians and is a step towards achieving the transformations that we urgently require

All my life I have worked with young people and I have never been able to understand how Colombian society and those who govern continue to underestimate the important work they do for the country. They nurture democracy with innovative and creative approaches to increase participation, they work on projects with vulnerable communities, and they promote spaces for dialogue. They dream of educational policies, design campaigns to defend lives, and support the reintegration of ex-combatants. As researchers, they try to understand the country's history, uncover mass graves and reach parts of the country that the majority of the population don’t hear about. I see them working for all of us to create a country with memory; making documentaries, painting murals, and I have also seen them marching. They are a strong generation who remain loyal to a country that has not given them opportunities to dream of their own futures.

They dream of educational policies, design campaigns to defend lives, and support the reintegration of ex-combatants

Today, those who are leading social protests are part of a young generation that feels disappointed and frustrated. They have seen how the political interests of their leaders have put an end to opportunities to live and grow up in a country free from armed conflict, violence and inequality. Like in the story my daughter reads, the government, selfish and spoilt, has gone back on agreements that are made every time society's support is needed to retain power. The worrying thing is that the price to pay for this breach of trust is young lives. This is a price we can’t afford to pay.

Disarmament, demobilisation and reintegration (DDR) Transitional justice and reconciliation Children and youth
Disclaimer: The views expressed in this article are those of the author and do not represent the views or position of Peace Direct.