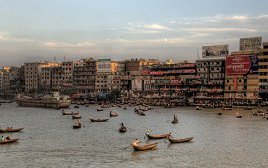 Bangladeshi capital Dhaka. Relations between the central government and the indigenous peoples in the Chittagong Hill Tracts. Image credit: mariusz kluzniak.
Chittagong has a bruised history
The Chittagong Hill Tract (CHT) region of Bangladesh is a picturesque area for globetrotters. But it also has a bruised history that Bangladesh does not like to reveal. The area was a scene of hellfire from 1975 until 1997, the consequence of a separatist civil war fought between some of its indigenous peoples and the Bangladeshi government.

The conflict officially ended on 2 December 1997 through the signing of a peace deal, known as the CHT accord, between the government and the political wing of the rebels, the Parbatya Chattagram Jana Samhati Samiti group, or PCJSS.

It left scars on both the indigenous and Bengali community, both of which lost numerous lives. The communities continue to suffer that pain, and therefore retain a grievance. What obstacles are there to establishing harmony in the region, advancing socio-economic development and building inter-communal relationships? How can peace be built, and can Bengalis and indigenous people ever be able to forget their blood-filled past?

We need to contemplate the situation the indigenous peoples are going through. Of 57 minority groups in Bangladesh, 13 of them are resident in CHT. Development does not reach every group equally, and several of them feel deprived. This is continuously overlooked as the conflict between Bengalis and indigenous peoples is often considered the major difficulty. But if this is resolved, internal conflict between different groups in CHT may emerge.

More generally, the hill people are a historically neglected entity. Beginning with the British colonial regime, then through Pakistani rule and finally Bangladesh itself, this ‘tradition’ has continued.

But the problem is multifaceted, with the intrusion of rebels of Burmese descent complicating matters. To protect the harmony of the country, indigenous peoples need to re-assess their own harmony as well as their relationship with Bengalis.

Land ownership is a key issue in CHT
Restructuring a number of institutions could be one route to this. In the CHT peace accord, a regional council and three district councils were promised – but decisions are based on a panel decided by an administrative board. This is not only a violation of democratic practice but also a hindrance to the path of harmony. A proper elective process would give indigenous peoples a chance to feel part of Bangladeshi democracy, which could help mitigate unrest with the Bengalis.

Action Aid Bangladesh is currently working in CHT. One of its initiatives is the introduction of the RIGHTS project, a conglomerate of several other projects which work on a number of issues including education, raising awareness of rights issues, and running campaigns against gender violence.

The Bangladeshi government has also taken steps to address underlying issues, such as through the Chittagong Hill Tract Development Board (CHTDB) and its joint venture with Unicef, which aims to improve the financial condition of tribal people.

One key issue is land ownership, with provisions to resolve a range of disputes made in the 1997 peace deal. In February 2016, Prime Minister Sheikh Hasina said that most of the provisions had been implemented. “The inhabitants of the hill tracts are the citizens of our country, our companions in ups and downs. It is our duty to end their misery, if they have any."

But Pranati Bikash Chakma, General Secretary of PCJSS, said that the Prime Minister had been an ‘abject failure’ on the issue.

One group working to resolve these issues is the Local Trust-Builders Network, a group of 149 volunteers promoting conflict resolution including teachers, traditional leaders, and members of the police force.

In order to improve their relations with Bengalis, indigenous people will also need to solidify their political status. Surprisingly they do not yet have a unified political platform. But as Bangladesh continues its journey as an independent nation, its Bengali and indigenous peoples must be in harmony. They may have their own perceptions of the issues in CHT and elsewhere, but that must not be allowed to be a hindrance to establishing cultural resonance, equality and harmony to lay the basis for peace.

More on Peace education and Transitional justice and reconciliation →