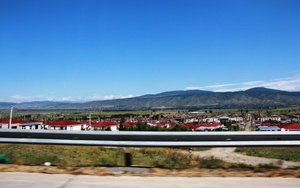 The geopolitical aspects of the conflict in South Ossetia (or Tskhinvali Region, as the area is called in Georgia) often divert attention away from local peacebuilding activities in the region. Russian involvement in South Ossetia has created tensions with the West, and these have been compounded since the beginning of the Ukrainian Crisis. Nonetheless, local peacebuilding efforts should not be neglected and local NGOs should be recognised for the valuable work that they do.

The conflict and its consequences

There is a danger that outsiders only see the conflict in strategic terms
The current situation dates back to 1991-92, when fighting erupted after the Georgian government refused to accept a public vote on the integration of South Ossetia into the newly established Russia Federation. A ceasefire held, but tensions began to increase from 2004 onwards after Mikhail Saakashvili become president of Georgia and made restoring the country’s territorial integrity one of his main priorities. The 2008 war raised the conflict from a national and regional issue to an international crisis when Russia intervened on the side of South Ossetia and recognised its independence. Russia also recognised the independence of Abkhazia, Georgia’s other breakaway region

After the 2008 war the Russians and South Ossetians constructed a fence along the Administrative Boundary Line (ABL) between South Ossetia and Georgia, sometimes cutting through villages and dividing communities in half. The daily struggles of communities living on the ABL and Georgia’s 250,000 internally displaced persons, as well as deadlock in the attempts to reach a political solution to the conflict, mean that local peacebuilding is crucial for any prospects of resolving the conflict in the long term.

However, outside the region attention is focused on the geopolitical consequences of the Russian-Georgian rivalry and the tensions between Russia and the West. As important as these issues are, the danger is that outsiders see the conflict only in strategic terms and ignore what the conflict means for the people directly affected by it.

Local peacebuilding in Georgia – the work of Kartlosi

Why does this matter? First, there are moral imperatives to acknowledge the experiences of those affected by the conflict and not to disregard them in historical and political narratives of great powers and geopolitics. Second, there are humanitarian concerns that will not be addressed if they are considered to be less important than the geopolitical problems or simply never receive any attention. And third, the prospects of successfully managing and resolving the conflict will be greatly improved by understanding and involving the communities most affected by it.

This is why organisations like Public Union Bridge of Friendship Kartlosi are important (‘Kartl’ means ‘Georgian’ and ‘Osi’ means ‘Ossetian’). Founded in 2006, Kartlosi aims to contribute to the peace process, carry out dialogue between communities divided by the conflict, and support the sustainable development of local communities in the Shida Kartli region (an area that borders South Ossetia).

Kartlosi is active in villages on the Georgian side of the ABL, working with local young people, journalists, media organisations, and other NGOs in initiatives to identify and document the problems that local people and communities face and take their concerns to the local government.

Security issues created by the ABL feature frequently in the personal testimonies of people living on the AB. These include the risk of detention on the South Ossetian/Tskhinvali side of the fence, where the location of the ABL is unclear. Access to water is also a major problem, as the source of their water supply lies on the Ossetian side of the ABL and it has been cut off since 2008, leaving them unable to irrigate their land. For a community reliant on agriculture, this has had serious consequences for their livelihoods. Unsurprisingly, large numbers of people, especially the young, have moved away from these villages, leaving behind an elderly population with few means of support.

Putting personal testimonies on record provides a different narrative to that of competition and rivalry
Documenting and recording the testimonies of people involved in the conflict in Georgia is a big part of Kartlosi’s work. Putting personal testimonies on record is an important aspect of local peacebuilding, and provides a very different narrative to that of strategic competition and rivalry. Another example of the kind of project that can only be done by local peacebuilders, but is crucial to how we understand the conflict, is a book Kartlosi produced called The Other Image of War.

This collection of 40 personal stories and testimonies from the 2008 war aims to restore trust and communication between the communities by showcasing examples of Georgians and South Ossetians who “found the strength and courage to stand side by side and help each other.” All the stories reflect the shared understanding “that even at the time of war there is still room for kindness, friendship and mutual support.”

Nicholas Barker worked on a European Voluntary Service project with Kartlosi, a peacebuilding NGO in Gori, Georgia, between December 2014 and August 2015. In October 2015 he will begin a DPhil in International Relations at Oxford University.
Read more from Nicholas Barker 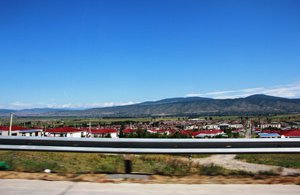 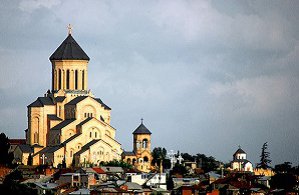