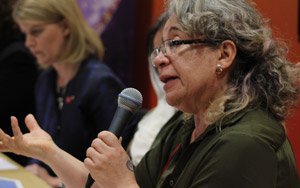 Rosa Emilia Salamanca speaking at the panel event organised by Conciliation Resources in cooperation with the UK Foreign and Commonwealth Office, the Australian Department for Foreign Affairs and Trade, and ABColombia and entitled 'Women in peace negotiations', as part of the Global Summit, June 2014. Image credit: (c) Conciliation Resources/Sarah Bradford

Insight on Conflict's Heather McLoughlin interviews Rosa Emilia Salamanca, the director of Corporación de Investigación y Acción Social y Económia (CIASE). CIASE is a Colombian peacebuilding organisation with a particular focus on women’s rights and strengthening public policy. Ms Salamanca is one of the founders of Colombian National Women’s Network and coordinates the Women Peace and Security Collective. She is currently engaging with the two newly appointed women on the Colombian government’s peace negotiating panel.

This interview was conducted in partnership with Conciliation Resources.

What inspired you to start working in conflict resolution?

Many things inspired me. I come from a family where we were taught that justice is very important and I was influenced by my parents to fight for justice. It has never been more important than now to work in building peace for the Colombian conflict. When you see that the country is in such a complicated situation and you see so much suffering and sorrow and hate, you know that you have to do something. Also, I have worked with indigenous people and with women. I am a feminist and I know that we have to change the way that many things are done and the way that society behaves for peace to be achieved. It is also inspiring to build peace from new perspectives; we cannot just take the middle population of the country, we just leave them, we have to find other ways to live together.

What areas have you focused in on your career? Women, children etc.

We have been working very hard with indigenous people for a long time and encouraging advocacy for everyone. We have also been working very hard in human and women’s right and in peace conflict. Another programme we work on is 'economy for life', as poverty and low social-economic position is a root for many conflicts - this is a long-term project.

What key lessons do you feel that you've learnt from working in conflict resolution?

We are a group that tries to have differences between people as the main point. I think that one of things that people must learn is that you can have some kind of shared principles even with people who think different politically. Recognising these shared principles allows people to still have some way to talk to each other over points that you can both agree on and move forward to resolve. What are those few key points that you can work together on? One of the key things that I've learnt is that people have a lot of prejudgements of each other and you have to really meet other people to tackle prejudice.

Would you say that local peacebuilders are more successful than Track 1 actors?

Well we have something which is called change of advocacy and lobby. I think that actors are important at all levels, but of course the distance between the high level and the people suffering is very great and is such a gap. I don’t think it’s more effective, you have to act, because if you don’t you don’t survive. You have to answer situations, to move and have resilience. Women in local places and at the national level both have resilience and they begin to act on behalf of the society. And sometimes in the high levels you see people thinking but taking a long time to act.

What about the women in the Havana Peace Talks?

They are there with the government; they are not from the field. But they can also do good work. They must be there because the kind of negotiations that we are having do not permit civil society participation at the top level. But now that the fourth point (tackling victim support) is being negotiated it means that the government is now going to directly hear from the victims of the conflict. We like the model of the negotiations, but civil societies and local peacebuilders must be involved in discussions of the bigger issues, not just what is being discussed at Havana.

What then do you think are the bigger obstacles for local peacebuilders and civil society, especially with their increased involvement in the peace talks?

Well for local peacebuilders we have this incredible challenge on Sunday with the elections [the elections took place on 15/6/2014 and incumbent president Juan Manual Santos was re-elected]. It is weird to see that such a huge and prolonged conflict is going to be such an important factor in the elections. We are a strange country, with democracy but also a conflict. The vote on Sunday is extremely important because if the extreme right wing wins then peace will dissolve and the human rights defenders and the victims will all be affected. But then we have other challenges if the peace side wins on Sunday. If that happens then we’ll have the challenges of the 3rd phase of the negotiations. The 4-6th stages of the agreement are going to talk about the victims in relation to DDR. Once these victims are recognised and heard from then we can move forward. I think that it is quite important that these challenges are recognised and that we tackle how we’re going to support civil society and move forward.

Can you please give an example of successful peacebuilding.

Now! I think introducing the two women to the negotiating table is an example of success. Women are so successful in peace because they support society during the conflict. Everyday women are trying to build peace by trying to rebuild their society from what is destroyed. Our symbol is the salamander because they do not burn from fire, their tails regrow after a fight and they have a small sound which is constant. I think women are so successful because they support society in the worst scenarios you can imagine.

What would you say is the impact of international attention (especially from the United States) on the conflict in Colombia?

I think that at this moment we’re on the same side, and if the 3rd point of the negotiations is maintained it is because America has agreed to it.

What is your next peacebuilding project? 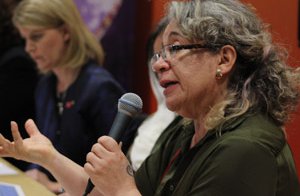