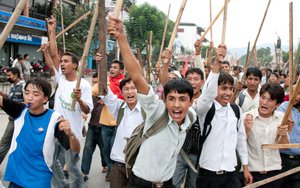 Student's participating in protests against the closing of certain degrees at RR Campus in Kathmandu. Image credit: Ingmar Zahorsky

Recent research has shown that urban violence not only affects people’s health and wellbeing, it has a devastating impact on the social fabric and economic prospects of entire cities. It can also set recursive cycles of vulnerability in motion – violence-affected individuals find it increasingly harder to be gainfully employed, while poverty is sustained through inter-generational transfers. However, the mechanisms through which violent crime and urbanisation are interconnected are not straightforward, and are the subject of continued debate.

On the one hand, higher rates of violent crime are generally seen in the larger urban centres, even though not all urban centres experience similar degrees of violence. At the same time however, the security and insecurity outcomes in a city are also the result of a complex range of socioeconomic, political and demographic factors, which can vary temporally, spatially, as well as be significantly different for different individuals or groups. Importantly, rapid urbanisation also brings with it a unique set of challenges, which has the potential to overwhelm key government services, including policing and security provision.

In addition to this, there has also been much debate about the role of the State in providing security in urban areas, which are increasingly characterised by a diverse group of actors, and where non-state actors also tangibly deliver security. In a recent study, we use evidence from Kathmandu and the Terai regions of Nepal to look at what the key challenges for providing security in rapidly urbanising areas are. We base our findings on a review of existing evidence (including, in particular, perceptions surveys amongst youth populations), consultations with key officials and civil society stakeholders, as well as focus group sessions with those arrested for violent urban crime, both while in incarceration as well as after their release.

We find that since the Comprehensive Peace Agreement was established in 2006, war-related killings have dramatically reduced. Yet, while these overall trends are improving, there are reasons to be cautious. First, official data is not capturing the true extent of armed violence, particularly criminal activity by gangs concentrated in and around Kathmandu and other fast-growing mid-size cities in the Terai region. Second, the nature of existing violence – relating to complex social and economic problems and perpetuated by a host of criminal groups – makes it far more difficult for formal policing and security structures to address it on their own. Thus, while the Nepal Police have a significant and often undervalued role to play in the sustainable prevention of violent urban crime, a wider ‘developmental’ approach involving state, and non-state actors (as well as armed groups themselves) is also needed. Police on the streets in Nepal. Eliza Tyrrell: https://flic.kr/p/9rhLhm

Overall, given the demographic shift occurring in Nepal, we find that the priorities and needs of younger populations are of particular importance, with unemployment and involvement in organised crime being two primary concerns. We find that (1) youth issues, (2) community-based partnerships, (3) urban planning and design, as well as (4) police capacity, resources and training issues, will need to be kept at the forefront of successful crime reduction strategies in urban Nepal. In brief, our recommendations include:

Children and youth Research
Disclaimer: The views expressed in this article are those of the author and do not represent the views or position of Peace Direct.

More on Children and youth and Research → 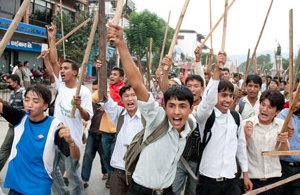