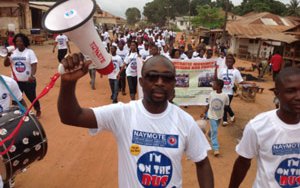 Youth and young adults are usually perceived as being responsible for unrest in Liberia. Politicians and other leaders usually take advantage of their vulnerability and use them for their own purposes. The Liberia Early-Warning and Response Network (LERN) recently published a report highlighting the correlation between youth and violence. Youth unemployment and poverty have made majority of the youths vulnerable to all kinds of anti-social behaviour, including drug abuse, armed violence, and assaults. Many young people cannot be gainfully employed because they lack the required skills. Even those with some level of formal education and with some skills find it hard to find a job to support themselves and their families.

The Liberian Bus project, although it does not directly provide livelihood opportunities, offers young people the possibility to engage with political leaders and to advocate for change. The overall goal of the project is to promote good governance, reduce or eliminate structural violence, and strengthen the rule of law in Liberia.

The Liberia Bus project is a national campaign, but focused on the Bong county, in central Liberia. It run over a three month period in the districts of Yellequelleh, Suakoko, Jorquelleh 2. It was launched with the support of the local office of the Federation of Liberian Youths (FLY), the Bong County Students Union, Cuttington University Student Union, and other non-school-going youth groups such as the car-loaders and motorcycle riders.

This interactive forum also allowed the youths to highlight additional activities that they strongly believe would help the Bus project to succeed. The youths suggested that it would be useful to extend the outreach of the project. As well as door-to-door knocking, text messages and phone calls, they recommended to contact some local cultural group, as they already have a large number of members and can engage many young people. The participants of the “Get on the Bus” project strongly believe that a well-planned Civic Education Campaign helps citizens cultivate habits, attitudes and the commitment necessary to nurture and sustain democracy. They recognise that it is crucial that citizens understand their rights and responsibilities as well as their duties and limitations. The volunteers on the Bus Project are organizing and conducting civic education programs in schools and communities that will strengthen and increase citizens’ participation in local politics, promote political tolerance and teach people on how and why it is important to get involved in decision-making.

Volunteers of the Bus Project are also leading a campaign to increase young people’s participation in all decision-making activities at the community level, in national and local politics, community development work and in other actions that can influence their livelihood. The volunteers run their campaign in 20 schools and 10 communities within four districts (Suakoko, Yellequelleh, Jorquelleh 1 & 2). They were working with students, teachers, school authorities and community residents, raising awareness on their rights and responsibilities as members of a democratic society. The volunteers are organizing civic education programs to increase citizens’ participation in local politics and decision-making.

The volunteers also distributed flyers with various messages on the importance of civic and political rights such as: freedom of expression, opinion and vote; right to hold politicians accountable; right to run for public office; responsibility to respect the law. These messages were designed to promote civic engagement and to address a wide variety of political and governance issues, including corruption, domestic violence, drug abuse, and marginalization.

During the launch of the Bus Project in Bong County, the young people said that they were increasingly aware that politicians and decision-makers rely heavily on their votes to win the elections, but, once the election process is over, their needs and aspirations are quickly forgotten.  They also acknowledged that the Bus Project will help promote their participation in national decision-making, something which has never really been a reality.

The Bong Chapter of the Bus Project  has currently more than 500 members. As the mid-term senatorial elections approach, it is likely that the number of participants will rise, especially because the group is planning to replicate the project in the headquarters of other districts.

Culture, media and advocacy Children and youth
Disclaimer: The views expressed in this article are those of the author and do not represent the views or position of Peace Direct.