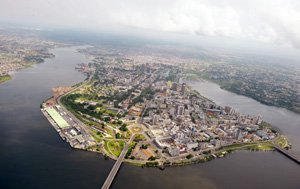 Although the Ivorian civil war has ended, violence remains widespread in Ivory Coast and its largest city, Abidjan. Image credit: UN ISDR.
Ivory Coast is in the shadow of peace, not at peace itself
Last month, Ivory Coast held presidential elections, which were won by the incumbent president Alassane Ouattara. There were no particular incidents during or after the poll. And economically, the country is making progress, with many development initiatives being taken by the government. This has led some people to believe that the country has been reunited with peace and stability. However, this current situation should more appropriately be seen as being in the shadow of peace – not at peace itself. Because Ouattara has failed on three levels: security, politics, and the judiciary.

Thousands of young people who fought for Ouattara during the Ivorian civil wars have not been properly reintegrated - into either the army or the public administration - as they were promised.

Around 10,000 such ex-combatants were not given any opportunity to return to society. Consequently, they have not returned their weapons. They have sometimes engaged in violent demonstrations and protests to focus the attention of officials on their situation. And Ivory Coast still has large stockpiles of weapons around the country. Experience shows that when disarmament is neglected in a peace process, an important trigger for conflict remains. So Ivory Coast’s un-disarmed population constitutes a threat to peace.

Indeed, such disarmament is a key and unavoidable step in post-conflict peacebuilding policy. As the Ivorian minister of the interior, Hamed Bakayoko, has said: “war is permanent until ex-combatants are disarmed and reintegrated.” But even if the majority of the ‘undisarmed’ militias support Ouattara, it is not a guarantee of stability; many of these young men are frustrated and may consider their situation, and the lack of opportunities they were promised, as a betrayal.

The country needs deep security reform
One of the major legacies of Ouattara’s presidency is the proliferation of other militias. The country has seen many groups, such as the traditional Dozo hunters, who fought for Ouattara in the 2010 electoral conflict, prospering. That militia is estimated to be about 50,000 men across the country, who sometimes act "alongside Ivoirian security forces.”

This is a clear shift in their role, as they are no longer working as traditional hunters but security forces. They have reportedly perpetrated gross violations of human rights.

Another type of armed group are the ‘microbes’. These are groups of former child soldiers, who during the 2010 electoral dispute fought for Alassane Ouattara, mainly in the Abobo area of Abidjan. Today, the microbes phenomenon has covered most of Abidjan. They attack, injure and kill people for their money and their electronic goods.

Finally, there are groups of former rebels, from the so-called Ivorian Republican Forces (FRCI). During the last decade they have committed many crimes and violated human rights, including mass killings during the post-election conflict in Duekoue, according to a charity at the time. Yet the rebels are granted key positions in the military. The country needs deep security reforms so that a criterion of having rebelled is not considered as a reason for promotion.

The need for inclusive political dialogue

During the electoral process, the opposition leaders set up a large coalition and called for dialogue with the president. That coalition, known as the National Coalition for Change (CNC), wanted to engage in discussions with state officials in view of the upcoming elections.

But Ouattara refused to engage on electoral issues. The CNC expressed great concern about the composition of the Ivorian independent electoral commission (CEI). But their appeal for discussions around the elections was rejected by the presidency. Therefore key opponents of Ouattara’s regime decided to boycott the election. His electoral triumph can therefore be seen as a enforced victory which divided the country.

Five year after the post electoral violence of 2010, all eyes are on Ouattara, to see if he will support an inclusive justice. Many who supported Gbagbo then are now on trial, either in the Ivory Coast or at the Hague.

But supporters of Ouattara who have been accused of serious crimes are still free. The relatives of those killed in a massacre of more than 1,000 people in Douekoue in 2011 are still waiting for justice.

As the president decided to hold polls regardless of the aspirations of one part of the Ivoirian populations, the elections took place in an atmosphere of discontent.

The president has eroded the pillars of democracy with his refusal of dialogue, by forbidding peaceful gathering and protest. There are claims of hundreds of former Gbagbo supporters being held as political prisoners.

These deep social and political divisions mean that the shadow of peace in Ivory Coast may not last.

This analysis has been provided by a local peacebuilding expert in the Ivory Coast.
Read more from Ivory Coast 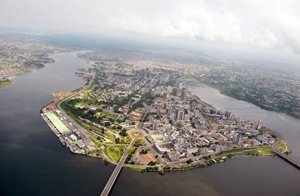