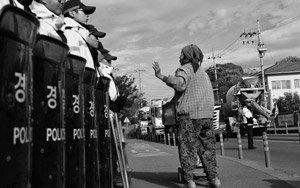 Since 2007, a small village in South Korea has led a non-violent resistance against the construction of a naval base next door to a UNESCO biosphere reserve. The official reasons for the construction of a military base on the self-governing island of Jeju, about 80 kilometers from the mainland, are to allow for better policing of the sea-lanes and faster response to any acts of aggression by North Korea. The Seoul government emphasizes that the Jeju Civilian-Military Complex Port will lead to regional development and provide maximum compensation for residents and investment into various facilities. A majority of the 1,800 Gangjeong villagers, who mainly live from agriculture and fishery, do not accept these arguments as valid. In a referendum held in 2007, 94 percent of the eligible voters opposed the naval base. They fear that its sheer size - once completed, the base will house 8,000 marines, up to 20 destroyers, several submarines and two 150,000-ton luxury cruise liners - will likely lead to the erasure of their community, 450 years of local history, culture and traditions. “Take the bus 600 and get off in Gangjeong. If you don’t hear the announcement just look out for the yellow anti-naval base flags adorning most houses and the extended peace murals on the walls.” was the instructions I got to get to Gangjeong. As a first time visitor to Korea it can sometimes be difficult to find one’s way. However, the yellow flags and peace murals could not to be missed. Arriving right on time for the daily 11 o’clock catholic mass I immediately witnessed the hourly police action to remove the protesters sitting in front of the gate. Over the period of four weeks of my stay, hour upon hour, the same non-violent blockade of the entrance to the construction site and the disproportionate police reaction to it could be observed. From the time the construction of the base was announced, activists, catholic priests and nuns, protestant pastors, law professors, teachers, artists, writers, families and students from all around South Korea have joined the villagers' protest. In order to hinder and delay construction, protesters file lawsuits and press for a reconsideration of the project nationwide, but also regularly block the entrance to the construction site with their mere bodies, chain themselves to anything available and go on hunger strikes. The most striking is the resilience of the protesters, young and old and from different social backgrounds, who despite their bruised bodies, the odds stacked against them and the risk of high fines or imprisonment, keep returning to the front of the gate to fight for what they believe is right. The entrance to the 50 hectares construction site in the village of Gangjeong is located on a busy main road linking the capital of Jeju to the second biggest city, Seogwipo. On the side of the road, a colorful tent city has been erected with sleeping quarters, a computer tent, a small coffee cart, and a lot of banners and artwork. Every hour, about 300 police stationed on a public parking 100 meters away march to the entrance gate. A protester keeping watch gives a signal using a gong and all the protesters (between 20 and 40 on normal days) take position in front of the gate and sit on chairs holding banners or sit on the floor with interlocked arms and feet. It usually takes the police about 20 minutes to clear the way and secure the entry and exit of the trucks. The protesters do not resist except for grabbing onto each other to make it more difficult to be removed. The eerie silence of the protestors is at times broken by the occasional scream of pain. During these 20 minutes, the busy traffic on the main road comes to a standstill. The protesters are very well organized and all tasks are shared. Cooking, press coordination, international supporters accompaniment, translation and the running of a peace centre are assigned to different activists. Alongside the hourly construction gate blocking, special actions are regularly organized. Activists chain themselves underneath cars, break into the construction site, or block construction trucks further away. Villagers and protesters, including the mayor of Gangjeong, have gone on long hunger strikes, have filed numerous lawsuits against the construction of the base and spent extended periods in the capital Seoul to gather support for the protest.

Every day, residents from other towns and villages on the island of Jeju come to give their physical and emotional support or bring food and clothes. Sung Sim Jang’s (42), from a village 40 minutes from Gangjeong, has taken a break from her work as a taxi driver to support the protest. She was on hunger strike for one month, even refusing to drink for over a week in November 2012. The core group of protesters, who are there every day, are activists originating from outside Gangjeong, from other parts of South Korea. Many of the long-term activists just planned to visit for a few days and ended up staying. Every week, catholic priests and nuns from different dioceses visit Gangjeong to hold masses and to join in the blockade of the entrance gate. A catholic priest explains that he comes down to Jeju during his free days, as the struggle is one of social justice that concerns the whole nation. Protestant orders sent volunteers down regularly as well. Through contributions by churches, villagers and supporters from all over South Korea, three meals a day are cooked and offered to the protesters. The mayor has transformed the upper floor in his office into a dormitory where activists can stay for free. Since 24-hour construction started, many activists sleep in tents on the side of the main road in front of the gate. Usually, a few international volunteers, mainly from Japan, Taiwan and the United States are present for a few weeks. Internationals risk being deported, or denied re-entry into the country when identified as a Gangjeong anti-naval base supporter. South Korean protesters argue that international presence has a deterrence factor and one protester explains that with international presence, the police might pinch the activists, but not blatantly hit them. The fight against the naval base currently mobilizes more than 125 non-governmental organizations across South Korea (ecologists, pacifists, Christians, Buddhists and associations for human rights) and more than a hundred abroad. The reasons for which activists from across South Korea and abroad oppose the base are manifold. They include calls for environmental protection, social justice, demilitarization and non-violence. Support for the anti-base movement at the national level is limited, one reason being that the mainstream media has not picked up the topic. When it has, it has portrayed the activists as troublemakers and has tried to discredit them. In times of heightened tensions with the North, calls for demilitarisation, peaceful resolution of conflict and the protest against military bases are heavily criticised, and the Gangjeong protesters are insulted as undermining the security of the state and being pro-north Korean agitators. It is a fight between David and Goliath, in which corporate/government interests clearly take precedence over democratic agency. This movement, however, is already becoming an inspiration for other non-violent protests, be it in South Korea, the region or even worldwide. Whatever the outcome of the protest, Mayor Kang says "we have been fighting for five years against the construction of the naval base in Gangjeong. If need be I will fight for another 50 years. This is the Island of World Peace! We are firmly convinced that peaceful protests can bring down dictatorships".

Carole Reckinger is a trained peaceworker, campaigner, journalist and photographer from Luxemburg specialised on Southeast and East Asia.
Read more from Carole Reckinger 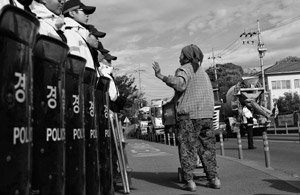