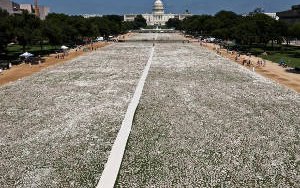 The National Mall in Washington, D.C., covered in bones as a visual representation of genocide. Image credit: One Million Bones.

One death is a tragedy. One million is a statistic.

July 11, 2015 marks the 20th anniversary of the genocide in Srebrenica
On June 8, 2013, the world watched as thousands of volunteers from across the United States gathered on the National Mall in Washington, D.C., to lay out 1,000,000 handcrafted bones. This symbolic mass grave was part of the “One Million Bones” project, serving as a collective protest against ongoing genocides and mass atrocities in places like the Democratic Republic of Congo, Sudan and South Sudan, Burma, and Somalia. Inspired by this, the Post-Conflict Research Center (PCRC) in Sarajevo contemplated: ‘What if we brought this project to Bosnia and Herzegovina?’

July 11, 2015 marks the 20th anniversary of the genocide in Srebrenica that claimed the lives of more than 8,000 Bosnian men and boys. Each year on this date, the victims’ families gather to mourn the loss of their loved ones and to bury those unearthed from mass graves around the country. Such enormous tragedy can be difficult to visualise for those who did not directly experience it. In order to help address this, PCRC has decided to bring the project to Srebrenica as part of the effort to commemorate the lives lost.

From July 8 - 11, PCRC will gather more than 100 Bosnian, regional and international youth to lay 100,000 handcrafted bones in the location where many Bosnians last saw their family members alive in 1995.

“We want the ‘Laying of the Bones’ to not only serve a way to connect the youth to the experiences of the victims and survivors, but to also serve as a platform, which will allow survivors to share their pain with the world,” explains Velma Šarić, Founder and Executive Director of PCRC. “This will be a difficult and emotional event, but we hope it will be something that our participants will always remember.” Hatidža Mehmedović. Image credit: Velija Hasanbegović.
Many donors saw the project as either too sensitive or too risky to support
In addition to this collective volunteer action, PCRC has planned a series of activities to increase young people’s involvement in the peacebuilding process, and to educate participants on topics related to moral courage, inter-ethnic cooperation, and genocide prevention. They will then attend the 20th Commemoration Ceremony together.

“We also have long-term plans for these bones,” explains Velma. “PCRC will be working with the Srebrenica Municipality, the Srebrenica-Potočari Memorial Center, victim’s associations, local and international NGOs, and artists to develop the plans for a permanent art installation and memorial that incorporates the handcrafted bones into its design.”

Velma adds: “PCRC is continuously working to bring young people to Srebrenica and I am always sad to see that there isn’t enough content to help people fully understand the gravity of what happened. This project elicits an undeniable visual and emotional impact on the viewer, and our plans to create an educational component as a part of the permanent memorial can help remedy this issue.”

Bringing the bones to Bosnia has not been an easy task for PCRC. Many donors saw the project as either too sensitive or too risky to support. The National Endowment for Democracy (NED), the Council of Europe (CoE), the Swiss Embassy in Sarajevo and the Organization for Security and Co-operation in Europe (OSCE) were among the few that saw this project’s potential and have played a key role in making the initiative possible. In addition, the Office of the High Representative (OHR) has provided in-kind support.

PCRC has also set up an online campaign to raise additional funds to help support participation in the project. PCRC’s greatest accomplishment, however, was gaining the support of Srebrenica’s leading stakeholders, including Mayor Čamil Duraković and the Mothers of Srebrenica.

Mayor Duraković stated, “Many projects related to the Srebrenica genocide have been done, but very rarely do initiatives come along that have long-lasting impact and plans for future sustainability. This is a historical project that has the power to visually present the consequences of genocide, not only during the commemoration, but also in the years to come.”

Hatidža Mehmedović, Founder of, the Mothers of Srebrenica, lost her two sons and husband to the genocide. She strongly supports the PCRC’s initiative. “When we victims are gone, we want young people to know what took place here and we want the world to forever remember our sons, fathers, husbands and brothers that were lost to this senseless atrocity. I believe this project will help keep their memory alive.”

One Million Bones and the Art of Revolution

The organisation Art of Revolution (AofR) created the One Million Bones initiative.

Naomi Natale, AofR’s Artistic Director, explains that the idea for One Million Bones originated in her work on The Cradle Project, a community based arts practice that visually represented the plight of children who have been orphaned by disease and poverty in sub-Saharan Africa.

“It was during this work that I recognized the power of combining education with the physical act of creating an artwork. It was an approach that could change people’s beliefs and motivate them to action,” Naomi explains.

Shortly thereafter, One Million Bones was initiated with a series of awareness-raising campaigns and activities, including preview installations of 50,000 bones in Albuquerque and New Orleans, Louisiana. Then, AofR began its Road to Washington campaign, which enlisted school children, college students, artists, activists and citizens as volunteers in the making of the 1,000,000 bones that were eventually displayed on the National Mall. “We view the One Million Bones project as a way to address an issue almost impossible to fathom. The overwhelming nature of genocide often leads to hopelessness and the belief that one person’s efforts can’t make a difference.

“This project shows that many small efforts can add up to a profound statement.”

This is an edited version of an article by Leslie Woodward that originally appeared on Balkan Diskurs. A non-profit, multimedia platform dedicated to challenging stereotypes and providing viewpoints on society, culture, and politics in the Western Balkans.

Balkan Diskurs is a non-profit, multimedia platform created and run by a regional network of journalists, bloggers, multimedia artists, and activists who came together in response to the lack of objective, relevant, invigorating, independent media in the Western Balkans. The author of this piece is Leslie Woodward.
Read more from Balkan Diskurs 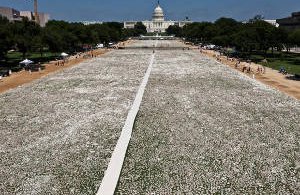