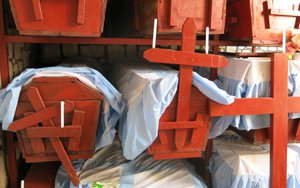 For the past three months I have been living in Rwanda. As an archival staff member conducting fieldwork at the Kigali Genocide Memorial for my Masters thesis at The Fletcher School of Law and Diplomacy, I focused my time on commemoration and memorialization of the Rwandan genocide against the Tutsi.

While working and living in Kigali, I also had the opportunity to take an in-depth look at peacebuilding activities throughout the country. This photo essay shows some of the key components and trends currently taking place in Rwanda to promote peace and rebuilding of a nation plagued by genocide nearly 20 years ago. As we finish the 19th commemoration and begin to approach the 20th commemoration, these activities become essential to building a new Rwanda. The Kigali Genocide Memorial - Gisozi, based in Kigali, founded in 2004 in partnership with the Kigali City Council, began a new initiative for peacebuilding education through a mobile exhibit launched this past summer.

The exhibit began in the local community of Gisenyi, on the Rwandan border with Goma, DR Congo. Student groups and local community members were all invited to visit the exhibit in the city’s community centre. The mobile exhibit highlights stories of survival from the perspective of children ages 10-12, both Hutu and Tutsi, who acted exceptionally during the genocide and have overcome the hardships they faced during this time.

The exhibit compels visitors to consider what the road to peace looks like, and how they can personally contribute to achieving peace in their community. The exhibit continues to highlight three children’s stories from the time of the genocide, and nine current organizations working locally in all areas of the country in peacebuilding activities. The exhibit will be displayed next in Butare, Rwanda. During the 100 days of commemoration between April and July, many Rwandans and international community members engage in commemoration activities. Through plays about genocide, poems, survivor’s testimonies, films, prayers, and speeches, organizations come together to officially commemorate the genocide that took place. Some organizations, like the Rwandan Development Board, require their full staff to be in attendance, which ensures a diverse community at the commemoration. Representatives from institutions like IBUKA, an umbrella organization supporting survivors in Rwanda, and the National Commission for the Fight Against Genocide, are invited to speak at the commemorations to provide expert histories and testimonies. These commemorations are essential in allowing the Rwandan community to remember the genocide that took place, and also teach young people the value of communal memory and rebuilding. One survivor and Rwandan friend decided one Sunday that we should go to the Eastern Province near Tanzania, to Nyarubuye, where he had survived the genocide at age 7. Five friends rented a car and drove three hours to arrive in Nyarubuye, where we visited the Genocide Memorial there, and also heard the story of this survivor first hand. We visited his former home, where his older brother had returned to start a new family. On their compound, they had a personal grave dedicated to lost family members, specifically his father and brother who were shot when the Interhamwe entered Nyarubuye.

Personal memorial practices are essential to help survivors cope with the trauma they have endured, and many survivors make personal visits to regions where family members perished, and these visits are often private. I was lucky to have had the opportunity to accompany my friend on his personal journey, and to witness and understand how he has built a normal life for himself after this tragedy. This female drumming group, Ingoma Nshya, is the only drumming group in Rwanda exclusively with women drummers. Drumming is traditionally a male activity, but these women saw drumming as an outlet to bring together women of all backgrounds, culturally, religiously, pregnant women, elderly women, and young women, survivors and perpetrators. At first, the group faced hardship in gaining community support, but as time passed, and as they became excellent drummers, the curiosity turned to national pride in this troupe. The group has been invited to perform at many national ceremonies, and even abroad in the United States.

This female drumming group exemplifies the cultural shift that has occurred post-genocide to allow women to break traditional barriers and gender roles. Women have also entered parliament, prominent positions in NGOs, and have taken on new roles as community leaders. The involvement of women in leadership is a clear shift in the peacebuilding landscape in Rwanda, as many survivors are women, and as women bring a unique perspective to the table.

Memorial sites as vehicles for remembrance and change One of the final vehicles for change is the broad landscape of memorialization in Rwanda. The memorialization that has taken place on a state, community, local, and personal level is high. The debate surrounding the purpose of heavy memorialization efforts is on-going and active, and is highly dependent on the view of both Rwandans and international players of what survivors need.

When conducting interviews with survivors about memorial practices in Rwanda, some noted that they visit memorials almost as a pilgrimage, where they can spend a few days mourning the loss of their loved ones, and then they return to their normal lives, where they try daily not to have to deal with the trauma and loss they endured. Others say that they have no need for memorial sites, as they are constantly reminded of their loss on a daily basis, during weddings, when children create family trees in school and identify the missing, and even just walking around empty homes. This debate remains unsolved, yet lack of consensus does not mean that the memorial landscape is not helping some survivors heal in many cases.

Samantha Lakin is a Masters student at The Fletcher School of Law and Diplomacy, Tufts University. Her current research focuses on human security in post-conflict societies.
Read more from Samantha Lakin 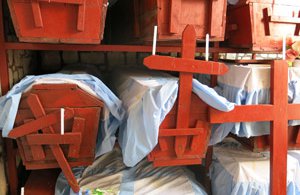 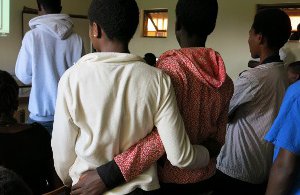