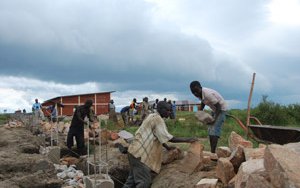 Peacebuilding is not an isolated activity in which peace activists have to limit themselves in their own contexts. To be successful, peacebuilding must seek its foundation in learning from other contexts, practices and experiences so that the lessons learned can be adopted and applied in other situations. Conflicts around the world have their commonness; the destruction of communities, taking lives of peacebuilders and hindering human development in all ways.

Instead peacebuilders have to seek for examples of what other post-conflict contexts are doing to build peace and heal their communities so that good lessons can be learnt from one another and help in the particular peacebuilding contexts.

Action for Peace and Development (APD), a Burundi based local peacebuilding organisation has the strong belief that learning and experience sharing are keys to success in consolidating peace and development in Burundi. To be able to achieve its goals, APD builds partnerships with organisations working for peace, so that they can work hand in hand to end violence and conflicts in the world.

It is in this context that, in mid-April 2014, I was granted by the Nexus Fund the opportunity to participate in the Civil Society Exchange Programme. The Nexus Fund is an organization dedicated to supporting the global community to end mass atrocities.  This programme took me to Liberia where I was hosted by the Liberian Peacebuilding Office.

My choice to participate in the Civil Society Exchange Program in Liberia was led by the fact that both my home country, Burundi, and Liberia have suffered protracted civil wars in the 1990’s and I believed that Liberia’s experience in peacebuilding would inspire what APD, and its partners in the Early Warning and Early Response Network, are doing to prevent violence in Burundi.

The Civil Society Exchange Programme came at the right time; the time when Burundi is about to have elections in 2015 (the elections period is feared to be violent). Burundian civil society organisations are also building networks to prevent election related conflicts and violence. Being aware of the necessity of learning from experienced organisations in order to boost the impact of peacebuilding projects APD is implementing to pacify Burundi, the choice of participating in exchange programme in Liberia was crucial.

The Civil Society Exchange Programme I coordinated was hosted by the Liberia Peacebuilding Office which coordinates the Liberia Early Warning and Early Response Working Group (LERN).

The LERN is a network of Liberia government institutions, civil society, UN Agencies and international NGOs. This consortium reveals the close collaboration between the Government and its partners to pacify, heal, and reconcile Liberia. As someone who comes from a country where relations between the Government, international organisations and civil society are sometimes strained, the close collaboration among Liberia’s stakeholders was a rich learning experience. I believe when stakeholders do not work together, peacebuilding efforts are likely to fail.

The Civil Society Exchange Programme allowed for exploring what Early Warning and Early Response is about. To warn about threats to peace and how to respond to them, to make a regular follow-up on how incidents evolve, how responses are handled and propose good solutions to apply, to conduct Early Warning and Early Response related projects (such us mediation, trauma healing, strengthen justice, fighting poverty etc) are core elements that sustainable peacebuilding needs. APD and its partners are starting an Early Warning and Early Response (EWER) against election violence, so the lessons learned from the LERN will be of great help in establishing a well-structured EWER Network. To know who to engage when warning about incidents and who to engage in responding to them is very crucial. This comes to reflect the role of inclusive participating government institutions, civil society organisations and other partners in the process of peace consolidation in Burundi. For an EWER to be successful, the government institutions such as administration, justice, security forces must support; whether in playing the warning role or in responding to incidents reported about.

In a post conflict context where peace is still in a fragile state, the combination of stakeholders’ efforts to end the conflicts is the only key for successful and sustainable peacebuilding. In the context of Burundi, the government, civil society, and the international community have to come together as one force. In recent times, however, the lack of effective cooperation between some key stakeholders has been observed.

On one hand, the government of Burundi accuses some civil society organisations to be behaving as the political opposition, when on the other hand, civil society organisations and the international community denounce the restrictions on freedom by the government. This lack of trust among stakeholders of Burundi’s security may hinder the success of peace consolidation efforts, especially as the country is heading to elections in 2015.

The model of cooperation among Liberia’s stakeholders to consolidate, heal and reconcile Liberians, where the government, the civil society and international community meet to tackle peace issues, and the Government can raise $3 million to support, is what Burundi needs. Burundi needs to recognise the significant role of civil society actors in consolidating peace and participating in its development. If civil society in Burundi denounces the abuses of human rights by certain government agents, this means the civil society is supporting the government to reinforce democracy. The experience from the Civil Society Exchange Programme will enable APD and its partners to work in a way that will increase trust among Burundi stakeholders so that they bring together their contributions to build a lasting peaceful, democratic, and developed Burundian society. 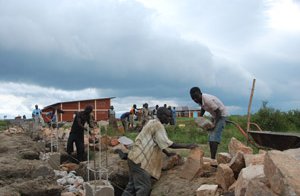