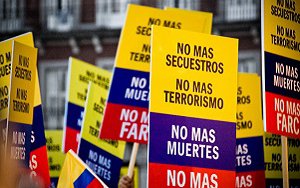 The colours of the Colombian flag: 'no more abductions, no more terrorism, no more deaths.' Image credit: Camilo Rueda López

Last week was a bi-polar week for Colombia. The Government deployed its entire communications arsenal to spread the good news: the establishment of preliminary talks with the National Liberation Army (ELN). The ELN is the second most relevant leftist guerrilla group in Colombia, which has been responsible for hundreds of crimes against humanity, forced displacement, assassinations, kidnappings and several oil structure attacks that have caused irreversible environmental harm.

For many years, the guerrilla organisations FARC and ELN have established criminal alliances with illegal armed groups that were created around drug trafficking routes. Even if the current government manages to settle down a peace agreement in Cuba, civil society is still being affected by the presence of those illegal armed groups attached to the mafia, organised crime and political corruption.

Political peacebuilding overlooks the need to drive the process from the bottom up
While Colombians received the good news with caution and almost scepticism, events on the ground elsewhere threw doubt on the effectiveness of such political-level talks. Public order in Antioquia and Cordoba, emblematic regions for their violent record during the armed conflict, was severely affected by an armed strike declared by a paramilitary group called Autodefensas Gaitanistas de Colombia, also called clan Usuga or Urabeños.

This illegal organisation has significant influence and local power in regions such as Antioquia, Valle and Norte de Santander, which it has built by spreading fear and intimidation among civilians through violent acts, blackmail and selective murders. The establishment of this armed group is related to the purported demobilisations promoted by ex-president Alvaro Uribe Velez with paramilitary groups in 2006. At that time, some “already demobilised” leaders of these armed right wing groups formed more armed organisations in order to preserve the control over drug trafficking routes and connections.

The recent armed strike occurred in the middle of growing mistrust around the peace talks in Havana, mainly due to the inability to sign the final peace agreement on 23 March - a promise that the Government and FARC made to the world at the end of 2015. This context of uncertainty was used by right wing leaders who organised a civil protest against the peace process. They called attention to the issue of impunity and questioned the real commitment of FARC to peace, who have already been involved in almost three years of negotiations.

A political agreement without a strong civil society behind it is an empty agreement
There is no doubt that the peace process is not in its best moment. Still, the Government is putting all its attention on boosting political work, as a necessary strategy to safeguard the talks that are taking place in Havana. However the possibility does exist that all the work the Colombian Government is doing around “political peace building” is dramatically overlooking the need to drive the peacebuilding process from the bottom up in the more real context of regions - along with ensuring tangible strategies guaranteeing security to citizens.

According to journals such as Semana and El Espectador, the armed strike led by paramilitary groups was part of a more complex strategy aimed to force civilian participation in the national protest against the peace process. It seems that while politicians and the Government are talking about peace, in civil society a civil war still lives on.

Beyond the political aspects related to the peace agreements, there is a major component in peace building that lies in the roots of civil society - and illegal armed groups are threatening it in a dangerous way. As long as civilians are dealing with fear and insecurity due to the presence of violent groups it will be very difficult to reach social capital and cohesion, major components for conflict transformation and reconciliation.

The Colombian Government and political leaders supporting this peace process should remember that the political peace they are trying to sign in Cuba is just an instrument to build the real peace, that is, peace in the regions, with the people and for the people. A political agreement without a strong civil society behind it is an empty arrangement, and people cannot think about peace if they are still living with fear.