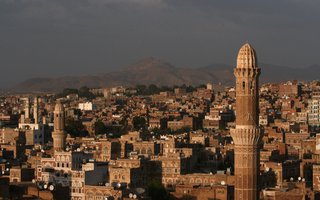 Sana’a, Yemen. Reports from Yemen suggest that much of its rural and urban heritage has been destroyed in the conflict taking place there. Image credit: Richard Messenger.
Saudi Arabia considers Yemen as its backyard
As the war in Yemen continues, Saudi Arabia remains the major shareholder in its domestic security and social spheres. This is regardless of the increasing political and military involvement of other Gulf Cooperation Council (GCC) members, particularly the UAE, Qatar and Oman.

Alongside such interference, there has also been direct developmental aid from the GCC, supporting in particular education and basic infrastructure needs such as electricity and water.

The reasons for this are complex. Saudi Arabic considers Yemen as its backyard. It has longstanding strategic concerns in the country which have led it to use an endless variety of approaches to take care of its interests. But these and the policies of others have created chaos. Part of the problem is the succession of short-term polices that were supposed to bring about containment of a regional neighbour.

Such short term policies will not answer Yemen’s fundamental issues of poverty, bad economic performance, lack of employment, internal and external security threats, corruption, and a lack of real leadership. And as these have grown, so Yemen’s weak fragile social fabric has almost disappeared. It will need generations to heal. However, what makes the Yemeni situation interesting is that many small rural communities in the north – who have been suffering as much as any from the hardship of the war – have seen positive social indicators.

Poor and middle class communities have come closer together and cooperated, and among other things this has seen, for example, a fall in crime in the north. I have been told that apart from the crimes of those involved in the armed violence on both sides, ‘common’ criminality like theft and hijacking have decreased.

On the other hand, in the south, the opposite appears to be happening, as it has done in previous episodes of violence.

This deterioration of the social fabric is undoubtedly due in part to the Saudi-led coalition of war that started in March 2015. In combination with political movements, radical religious schools and the role of armed militias – and in the context of an almost entirely absent state – the situation is bleak.

Friends and enemies: a failed strategy

The old-fashioned game of friends and enemies has fallen apart
Any real road map to peace must involve Yemen, Saudi Arabia and the GCC countries. The old-fashioned game played by so many in the region, of friends and enemies, has fallen apart. The assumed strength of the regional partnership with Yemen was revealed to be a fiction by the escalation of events at the end of 2014. Hence the 2015 intervention, when the GCC countries and their allies felt that something had to be done quickly. But after a year of bloody warfare, many are questioning that strategy.

Long term partnership and integration with a credible Yemeni leadership are vital to the region. The GCC countries have to reconsider, together and independently, their policy towards Yemen.

They must support a representative Yemeni leadership, working to address the key issues of poverty and development. They must support Yemen’s immediate integration, where possible, into GCC joint economic, labour and education zones. And they should aim to provide Yemen with full membership as soon as possible, in order to start developing some kind of coherent regional policy towards it.

The situation on the ground can be improved with regional and international mediation and initiatives. There is currently limited space for civil society and NGOs as they are all seeking shelter from tanks and missiles. But their work could flourish with even the start of negotiations aimed at a ceasefire.

The challenge for civil society

There are some local civil society organisations running small initiatives, including training activists in their area and documenting human rights violations. However, they have to work carefully so as not to inflame an already tense situation.

Other organisations find that their work is often interrupted. Many have had to change, shift or move their offices or the focus of their work in an attempt to avoid confrontations with the winning side in their area, regardless of whether they support that side or not. Sometimes it is worse: a colleague of mine had to shut down her organisation’s work in Yemen and flee with her country to Egypt.

Contacts have told me that a ceasefire and direct negotiations are needed to create confidence. There must be a focus on restoring basic public services with immediate aid. Following that, there needs to be stability, security and infrastructure rebuilding, with a special focus on providing health, education and food supplies. Finally, they say, there must be a concerted effort to support healing and reconciliation initiatives. In short, the challenges of peacebuilding work are many when the bombs are still dropping.

The need for a comprehensive settlement

For many reasons, the so called Arab Spring, and its multiple and liberation social youth movements, made the situation in the Middle East worse. With the various conflicts in the area, and the different strategic interests of the regional and international players, Yemen could not be saved from this earthquake. And it is the GCC’s backyard. But it has taken an age for any kind of joint policy towards the country. Containment tactics, and small financial injections from time to time to keep the country afloat, will not work. There must be a comprehensive settlement.

Transitional justice and reconciliation Dialogue and mediation Atrocity prevention
Disclaimer: The views expressed in this article are those of the author and do not represent the views or position of Peace Direct.