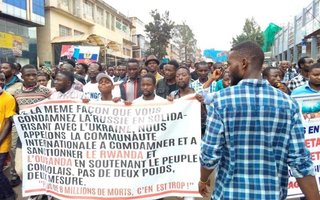 Credit to Bureau de Soutien a la Consolidation de la Paix en RDC (BS-RDC). Protests in DRC, Banner reads: in the same way that you condemn Russia in solidarity with Ukraine, we call on the international community to condemn and sanction Rwanda and Uganda by supporting the Congolese people. "more than 8 million dead is too many!"'

The province of North Kivu in eastern Democratic Republic of Congo (DRC) is facing significant instability due to the resurgent March 23 Movement (M23), which has resumed clashes with the Congolese armed forces (FARDC) in the territories of Rutshuru and Nyiragongo since June 2022.

The Congolese government (Kinshasa) claims the aggression is orchestrated by Rwanda, using M23 as a cover, arguing that M23 would otherwise have neither the manpower nor the material capacity to confront the FARDC.

Unfortunately, these clashes are not only leading to the mass displacement of hundreds of thousands of civilians, mostly women and children, but also to high tensions between the DRC and Rwanda, which may hinder prospects for peace and stability in the entire Great Lakes region.

Accusations from both sides

After occupying the town of Bunagana on the border with Uganda since June 2022, the M23 rebels advanced to seize several other towns and localities in the Rutshuru territory during October. The towns included Rutshuru and Kiwanja, as well as the border post of Kitagoma on the DRC-Ugandan border. Hundreds of thousands of local people have fled either to Uganda or other localities still considered safe.

Pointing the finger at Rwanda with claims that it had irrefutable proof of their aggression, Kinshasa decided to expel the Rwanda’s ambassador in the DRC at the tail end of the higher council of defense meeting held on 29 October, which was chaired by President Felix Tshisekedi.

Rwanda, for its part, has always rejected Kinshasa's accusations and accused the DRC of supporting the FDLR (The Democratic Forces for the Liberation of Rwanda), an armed group opposed to the government in Kigali and operating on Congolese soil since the 1994 Rwandan Genocide.

These accusations on both sides accentuate the mistrust and tensions between not only the leaders, but also the communities of these two countries, which are historically and geographically fated to live together. The international community, as well as regional peace mechanisms, could play a crucial role in tackling this impasse to avoid the escalation of violence and the outbreak of conflict that could engulf the entire Great Lakes region.

The limits of a militarised responses to bring peace

Eastern DRC, where there is limited state presence, is considered the rear base and refuge of foreign armed groups that engage in incursions in neighbouring countries like Rwanda, Uganda and Burundi. For those neighbouring countries, this provides ‘legitimate’ cause for their militaries to invade Eastern DRC under the pretext of stopping those groups.

Kinshasa is doubly threatened not only by local but also by foreign armed groups that kill civilians, commit sexual violence, plunder natural resources and destroy the environment through logging and massive poaching – all under the watchful eye of the international community.

The shared security challenges caused by the plethora of armed groups across the region should incentivise the leaders of the Great Lakes region to look beyond their own economic interests and work together to find definitive and peaceful solutions to this common threat.

Local peace initiatives risk being relegated to the background by donors who favour funding humanitarian interventions only, forgetting that the population needs peace above all.

Impact of this situation on local peacebuilding initiatives

The continuing tensions between Rwanda and the DRC are negatively impacting local peacebuilding efforts in the Great Lakes region.

According to the Coordinator of the Bureau de Soutien pour la consolidation de la paix en RDC (BS-RDC), hate speech against Rwandans and against any Rwandan-speaking person has intensified in recent days. This undermines the social cohesion, peaceful cohabitation and peace education initiatives developed by local peace organisations.

In addition, women traders who live off the cross-border economic activities between the town of Goma in the DRC and Gisenyi in Rwanda are being penalised and their families are suffering - usually, these commercial exchanges for livelihoods contribute to the peaceful cohabitation between the two border towns.

Local peace initiatives risk being relegated to the background by donors who favour funding humanitarian interventions only, forgetting that the population needs peace above all.

For the programme officer of the local organisation Bénévolat pour l'Enfance: “The diplomatic crisis between the DRC and Rwanda is having a very negative impact on peacebuilding initiatives in the African Great Lakes sub-region. Firstly, the projects initiated in the conflict transformation process will have little chance of achieving their results, due to the lack of trust and the climate of mistrust between the beneficiaries of these projects. Secondly, the crisis is becoming a real source of slowing down cross-border commercial activities, some of which are carried out by women small traders and supported by local organisations in the framework of peace building in the Great Lakes region.”

With more than 20 years in the DRC, the United Nations Stabilization Mission in the Congo (MONUSCO) – considered the largest UN mission in the world with more than 15,000 peacekeepers – has failed to stabilise the DRC and end the threat of armed groups in the Great Lakes region.

MONUSCO has lost credibility and trust with the local populations of eastern DRC in particular, who are no longer prepared to tolerate the mission as it watches helplessly as groups such as the FDLR and ADF massacre civilians and conquer territory.

If the current tension between Rwanda and the DRC persists, community tensions targeting certain populations could turn into unprecedented community violence and the confrontations between the two countries could escalate dramatically in the region. The international community, particularly the European Union and UN, should take this situation as seriously as the war between Russia and Ukraine.

The African Union should not only call for a cease-fire between the Congolese army and the M23 rebellion, but also encourage country leaders to have frank and constructive dialogue. It should also consider sanctions against any country found guilty of aggression, violating international law, territorial integrity and national sovereignty by conducting free and independent investigations.

The regional military force should not assume the mission of observation or verification, but jointly with the FARDC and MONUSCO push back against all armed groups, both foreign and local, to definitively pacify the Great Lakes region. Donors should support local initiatives to combat hate speech and discourage communal violence based on identity and stereotypes in order to promote peaceful cohabitation between communities.

The DRC needs to train, equip and effectively support its army so that it is respectful and capable of dealing with any internal or external threat. But it should also accelerate the operationalization of the disarmament, demobilization and community reintegration programme (DDR-CR) for former combatants who have left armed groups. The improvement of the living conditions of these ex-combatants and their adequate community reintegration would encourage other illegal arms holders and warlords to subscribe to the DDR-CR programme for peace in the DRC and the Great Lakes region.

Marius Ruhanamirindi is Peace Insight’s Local Peacebuilding Expert in the Democratic Republic of Congo (DRC). Based out of Goma, Marius works as a Consultant at the Peacebuilding Support Office in the DRC (Bureau de soutien pour la consolidation de la paix en RDC). He has previously worked as a Project Consultant with Oxfam GB on their joint programme against gender-based violence from December 2019 to December 2020. He was also a Project Coordinator for the promotion of peace and social cohesion by young people within the national NGO Bénévolat pour l'Enfance in the DRC for more than 3 years.
Read more from Marius Ruhanamirindi

Conflict prevention and early warning Disarmament, demobilisation and reintegration (DDR) Dialogue and mediation Preventing violent extremism
Disclaimer: The views expressed in this article are those of the author and do not represent the views or position of Peace Direct.