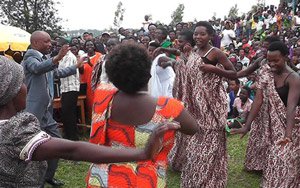 Since the 1994 genocide, Rwandans have been making efforts to rebuild their country’s social fabric using a variety of creative means. Socio-economic groupings, such as cooperatives and self-help groups, have been developed and used not only for economic growth but also for repairing and consolidating social cohesion. Village Saving and Loans Associations (VSLAs) is one example of the socio-economic groupings approach developed in Rwanda.

Overview of the VSLA approach

The approach was initiated in Rwanda by CARE in 1999 with its CLASSE (Community Learning and Action for Saving Stimulation and Enhancement) Project. VSLAs help alleviate poverty in three ways:

The approach employs a field officer and village agents to establish the VSLAs in communities. The village agents are exemplary members of the target community, who are trained to promote the establishment of VSLAs and are supervised by field officers over a period of 10 – 18 months.

VSLAs in the AEBR’s trust-building project

Association of Baptist churches in Rwanda (AEBR) has undertaken a socio-economic development programme using the VSLAs approach. The programme was piloted in Rwanda’s Southern Province, in Gisagara, Huye, Nyanza and Nyaruguru districts, and has brought together more than 7,000 people. Throughout the implementation of the pilot phase of the programme, it was realised that the established VSLAs need to benefit from an activity aimed at strengthening trust among the members. Oriented to responding to the needs of the beneficiaries, AEBR, in partnership with Shalom Educating for Peace and supported by the Baptist Union of Denmark, has initiated a trust-building project designed for VSLAs’ members. The project developed a training activity with the aim of equipping the VSLAs with skills to transform conflicts and building trust among the VSLA members.

The trust building project consists of training organised for the village agents who facilitate the dissemination of its content to the beneficiaries of the project. Training modules include: understanding and analysing conflict; conflict resolution approaches; conflict resolution: collaborative approach; problem-solving: conciliation;  building trust within group/community; celebrating differences; effective nonviolent communication and anger management; building a resilient and peaceful community; and enhancing skills for effective dialogue among the group members. The training took place from 9 to 13 December 2014.

Short-term impact of trust-building training on the VSLAs

In September 2014, after nine months, a short-term impact assessment of the training was carried out.  Feedback from participants highlighted a number of positive effects of the training.

The participants confirmed that the training increased their understanding of conflicts, their sources and how they can be positively resolved. They acknowledged the decreased number and intensity of conflicts in VSLAs as evidence of the training’s impact.

The participants explained that before the training, they had not had time to discuss issues affecting the groups. They reported that dialogue has increased and they have managed many of conflicts happening in the VSLAs without the intervention of village agents or field officers. In some cases, members of the VSLAs have facilitated or contributed to the resolution of conflicts that occur in their communities.

The participants testified that the training contributed significantly to building and consolidating group cohesion within the VSLAs. Some within the VSLAs had interpersonal conflicts in their daily life (such as land-related conflicts), and were able to give examples of how such conflicts had been resolved by applying knowledge gained from the training. In addition, the participants underlined that mutual respect between members had increased due to the lesson on respecting differences. The participants also recognised that the training inspired good leadership in VSLAs. They stressed that before the training the VSLAs leaders in some groups had used an authoritarian leadership style. After the training, they have freedom to discuss group issues and make decisions collectively. This has allowed members to have much more involvement in decision-making regarding the management of the VSLAs.

Observations from a peacebuilding perspective

It is clear that the efforts to build conflict-transformation capacity within VSLAs and other socio-economic groupings could significantly contribute to building peace and consolidating social cohesion in beneficiaries’ communities. Above all, this approach helps to strengthen the relationships among group members. The approach is particularly relevant in the context of Rwanda, as the country is investing in rebuilding socio-economic development. Building sustainable reconciliation, social cohesion and economic growth have been and remain the key pillars of reconstruction. One way in which society and local governments are dealing with the challenges is through socio-economic groupings.

The approach meets the interest of the Rwandan society in two key ways. Firstly, such groups are in keeping with the strong emphasis on community in Rwanda. Secondly, although groupings such as VSLAs may be viewed as organisations for the promotion of the economic interests of its members, it does not confine itself solely to the economic aspects of life. It permeates the social side of life and aims to establish a new democratic social order based on freedom, fraternity, equality and equity, where people live in harmony, caring and sharing like a family, where there is a unity of spirit and a common economic bond and where people have the freedom to shape their destiny.