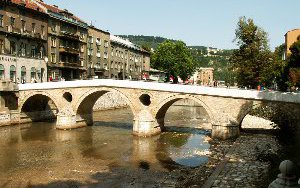 On the very same day, exactly one hundred years ago, the course of history was irrecoverably changed by the assassination of Archduke Franz Ferdinand and his wife by Gavrilo Princip. Princip was a member of the revolutionary group, “Young Bosnia” (“Mlada Bosna”), that fought for the liberation of south Slavs from Austro-Hungarian occupation; and though a Serb from Bosnia, Princip considered and declared himself Yugoslav.

Even though WWI did not start until a month later, when Austria declared war against Serbia, it has been generally accepted that the shot in Sarajevo was the war's trigger, and that Princip was the man who pushed the world into one of the largest human catastrophies.

In the Balkans Princip remains a controversial figure, described either as a terrorist or a freedom fighter. Throughout different historical periods, interpretations of Princip have varied depending on the ideology and political needs of given regimes. According to Dubravka Stojanović, a prominent Serbian historian, “In socialist Yugoslavia, members of Young Bosnia were celebrated as socialist heroes, as freedom fighters for the workers and for the oppressed.....Every regime has misused him – in the Kingdom of Yugoslavia it was conveniently forgotten that he was a left-wing anarchist. Under socialism, it was forgotten that he was a nationalist, albeit a Yugoslav. And then with Milosevic, Princip becomes – wrongly – a Serbian nationalist. Then in the 1990s, he starts to be seen as the father of the fight for Republika Srpska in Bosnia.”

The idea of organising commemorations in Sarajevo emerged around 2004, with the EU keen to see the completion of the Western Balkans accession into the EU by 2014. Instead of a supposed “return” to the family of European nations, however, Bosnia and Herzegovina (BiH) could not be further from that well-meaning objective.

Gripped by political impasse due to the endemic absence of political will on the part of ethno-centric leaders (particularly when it comes to amending its constitution to allow minorities such as Roma and Jews to run for the highest offices), a cumbersome institutional structure (the country is divided into two Entities, one of which is further divided into ten Cantons)  and a prevalent denial of responsibility for war crimes committed during the 1990s, BiH is mired in overwhelming frustration and feelings of helplessness.

This was particularly evident during recent floods that devastated parts of BiH, leaving thousands of people – many of whom were refugees or internally-displaced during the war – once again homeless and losing almost everything they possessed. The local authorities' response was belated and inadequate, revealing its impotence and lack of willingness to act responsibly. In addition, civic protests that spread throughout BiH in early February - resulting in citizens’ plenums in Tuzla, Sarajevo and Mostar demanding the resignation of current political elite - are a strong reminder that BiH urgently needs political and social transformation. October's elections may not, however, bring the change that many desire.

With Croatia becoming an EU member on 1st July 2013 and Serbia starting negotations, BiH is increasingly lagging behind. Instead of focusing on necessary reforms, BiH’s politicians have wasted time, energy and resources on creating narratives fitting their ethno-national interests.

As it became clear that competing narratives amongst Bosnia’s political elites rendered a joint commemoration impossible, the French and Austrian Government, together with several other EU member states, took the initiative and gathered a host of historians, political scientists, artists and diplomats who discussed the causes and consequences of WWI from different perspectives.

The initiative was conceived as a reminder of the importance and fragility of peace – not only for the peoples of BiH, but for the entire world - and the messages of peace and reconciliation were to be sent from Sarajevo, with its recognisable image of war-time destruction and suffering finally replaced by a vision of a peaceful and prosperous future.

According to the Mayor of Sarajevo, Ivo Komšić, "In the past 100 years, Sarajevo always reminded people of war and tragedy. It gave people a sad and deep impression. Now it is a good opportunity to give people some different impressions. Through these events, we hope to show everyone a peaceful Sarajevo, a more inclusive, ever-changing Sarajevo."

The key event was the concert of Vienna Philharmonic orchestra, performing in the City Hall, that was only recently renovated after its destruction in 1992. Whilst the concert was broadcast on a large outdoor screen so to be available to broader audience, it did not go unnoticed that it was exclusively organised for selected few, i.e. BiH’s political elites and international dignitaries solely.

In general, the majority of Sarajevans remained indifferent to various events organised in the city and chose to either ignore them completely or simply describe them, as one elderly Sarajevan did, as yet “another circus of the international community”.

The event was boycotted by Bosnian Serb leadership, with Nebojša Radmanović, the Serb member of the tripartite Bosnian Presidency, stating that the Sarajevo city government had abused the commemoration and “subordinated its meaning to the context of the 1990s civil war in Bosnia and Herzegovina”.

Such a statement was prompted by the inscription on the City Hall which refers to “Serbian criminals”, which both Bosnian Serbs’ and Serbian leader interpreted as provocation and attribution of collective guilt for war crimes to all Serbs. Prior to that, Sarajevo city authorities announced that the monument to Franz Ferdinand was going to be re-erected in Sarajevo, which additionally provoked Bosnian Serbs who saw this as an attempt of blatant historical revisionism.

Therefore, an alternative event was organised in Višegrad, a small town in eastern Bosnia, that was the scene of atrocities against Bosnian Muslims in the 1990s. Famous for its bridge, which – owing to the literature of Ivo Andrić – became the epitomy of Bosnia’s idiosyncratic position of a bridge between eastern and western civilisations, Višegrad is now an impoverished town, scarred by the horrors of recent war and stifled by ethnic contestation.

The event took place in Andrićgrad, an artificial village modelled on Serbian tradition and customs, that was built by famous film director, Emir Kusturica. For him, Gavrilo Princip is Serb hero, who fought for liberation of Serbs and other southern Slavs from Austro-Hungarian terror. Just a day before the commemoration, Serb authorities revealed the monument to Princip in East Sarajevo, i.e. the part of the city that is now in the Republika Srpska, thus ’misappropriating’ Princip’s legacy and trying to rewrite the region's history.

Ashley, who was in Sarajevo at the exhibition opening, said “Sarajevo is the first post-conflict city to present Making Peace. Knowing how much emphasis will be put on commemorating the Great War ... and while it is important to pay tribute to all the soldiers but also civilians who died, we believe that it is hugely important to show how much is being done to try to make the world a more peaceful place. In doing so we hope that the exhibition will motivate and inspire young people to get involved themselves in what is now a global movement”.

According to Ashley, the response of locals people to the exhibition was significant. “We had huge media attention even weeks before the actual opening ... many people got to hear about the show and turned up for the opening. Not only were they able to participate 'freely' in the opening - unlike some of the commemoration activities taking place that weekend - but they also were able to participate in the youth workshops organised in conjunction with the OSCE and Youth Development Initiative Kult”.

Ashley added that “a number of people commented on how important it was that Making Peace be presented in Sarajevo, not only because it is the first time that such a large exhibition has been shown outdoors, but that for many Bosnians the word Peace is empty or has no real meaning, as it is often used out of context and because people don't really understand what it signifies. Importantly, Making Peace put this into context with 'Economic and Social Justice' section playing a central role, which is the subject that speaks to many Bosnians right now due to so many stories of corruption within government and private enterprises”.

These issues, indeed, are more pertinent than ever – in BiH, as well as throughout the region and across Europe – and one can only hope that the lessons from the past will be a reminder to us all that peace is not something that can be taken for granted, but rather something that needs to be constantly strived for.  All those who are willing to critically analyse the causes and consequences of WWI and subsequent conflicts that plagued 20th century understand that simplistic dichotomies and glorification/vilifying of individuals or peoples do not produce necessary answers, nor do they teach human kind how not to repeat the past mistakes.

Instead, we need to look at current challenges and think about peace beyond its traditional understanding as constituting the absence of war. As this exhibition reminds, “there are international treaties and declarations that define economic justice, international law and human rights, however, there is no simple explanation as to what peace is or how it is made.” Therefore, the message of the exhibition is that “for peace to prevail all five elements need to be present. If one is missing then peace will remain fragile”.

Building peace in BiH will require the forming of narratives that will bond together, not divide; that promote reconciliation, not revisionism.