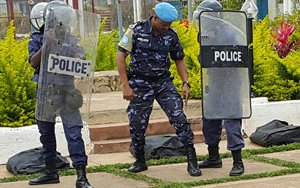 There is clear demand in the DR Congo for justice from victims of grave human rights violations and a readiness of (at least some) prosecutors and courts to conduct more effective and efficient investigations into alleged crimes.

A 2014 survey led by the Harvard Humanitarian Initiative and the UN Development Programme revealed that most respondents in eastern DR Congo (89%) believe that "accountability and justice for the serious crimes committed during the wars and conflicts between rebel and governmental groups is very important." Most respondents "would like to see those responsible for the violence punished (60%), put in prison (42%), or tried by a court (38%)."

Some progress is being made toward that goal, although Congolese judicial authorities must overcome diverse obstacles.

Research conducted by the International Center for Transitional Justice (ICTJ) shows that DR Congo has made only limited progress toward prosecuting perpetrators of serious crimes and violence. Despite the large scale of alleged violations and significant investment in pursuing justice – including from international actors — the number of cases involving international crimes remains low.

For example, there are very few cases initiated against officials of the Forces Démocratiques de Libération du Rwanda (FDLR), although their involvement in committing atrocities is well known.

According to ICTJ research, military courts in eastern DR Congo (North Kivu, South Kivu, and Ituri) initiated just 39 cases involving international crimes from 2009 to 2014 (six years). This is a slight improvement over the previous period (2003 to 2010), when they dealt with only 12 cases of such crimes.

The ICTJ found that the majority of cases of international crimes initiated by the Auditorats of North Kivu, South Kivu and Ituri from 2009-2014 remain stuck at the investigation stage.

This is not enough to address the enormity of human suffering.

Congolese law regarding international crimes needs to be clarified
There are many reasons for this justice deficit. At the most basic level, investigating crimes by foreign armed groups is incredibly difficult in any context. In DR Congo, judicial authorities face particular challenges: poor reporting and recording of evidence, an inability to arrest perpetrators, and difficulty accessing crime scenes, particularly in remote areas controlled by armed groups.

In order to make progress on even those limited open investigations, a prosecutorial strategy is needed that sets out transparent and objective criteria for selecting cases. Such a strategy should be aimed at dismantling the criminal networks that perpetuate violence in the country. This would help to maximise institutional, human and material resources for the fight against impunity. Following established criteria in the selection of cases would also limit allegations of political interference – and increase victims’ and the general public’s confidence in the judiciary.

Without such a strategy, Congolese courts will continue to be bogged down with superficial inquiries and non-specific arrest warrants and, ultimately, acquittals for lack of evidence.

Recently, the military judiciary has identified several priority cases to be prosecuted first, in order to create a cascade of findings and decisions. These include two cases against local defense militia Mai Mai groups concerning child conscription and enlistment committed in North Kivu between 2008 and 2013 and the following two cases:

The Walikale Case, which concerns an attack against 13 villages near Luvungi on Kibua Mpofi-axis from July 30 to August 2, 2010, by a coalition of armed groups, including the FDLR and Maï-Maï Cheka. During the attacks, at least 380 men, women and children were raped, 923 houses and 42 shops were looted and at least 116 people were abducted and subjected to forced labour.

The Kitchanga Case, which concerns clashes in February-March 2013 between the national army (FARDC) and the Alliance des patriotes pour un Congo libre et souverain (APCLS), during which 237 civilians were killed, 89 were injured and 520 houses were looted between Masisi and Kitchanga.

These are serious cases that shook humanity with their level of brutality. Effective and credible trials with results that inspire confidence in the legal system would be a sign of significant progress.

Another necessary step is clarification of Congolese national law regarding international crimes. Parliament has yet to pass a law implementing the Rome Statute of the International Criminal Court. Some military judges have tried to fill in the gaps by directly applying the Rome Statute; however, it is not being done in a systematic or coherent way. This leaves room to question whether the principle of legality is being fully respected. Parliament needs to act definitively on this issue, and quickly. Some military judges have tried independently to apply international criminal law, but need parliamentary support to be able to do so credibly. Image credit: ENOUGH Project.

The role of civil society

There is only one alternative to strengthening prosecution – and that is giving up
For prosecutions to be successful, Congolese civil society groups also need to be more actively involved in cases, particularly in gathering and sharing evidence. Most often, investigation into serious crimes in DR Congo are precipitated and funded by international organisations. Current judicial dynamics involve several international partners whose support and pressure often determine which cases go to trial and which do not. Given the proximity of certain national NGOs with victim communities, particularly in the most remote places where crimes are committed, their support is critical.

There is only one alternative to strengthening prosecution authorities and their strategies – and that is giving up and forsaking the victims and the fight against impunity in the DR Congo. But anyone who has seen the level of suffering and the amount of resources and time already invested in strengthening judicial capacity in the Congolese courts know that this is not option. This would only trivialise previous efforts to bring perpetrators to justice and frustrate the initiatives of some brave prosecutors, judges and civil society groups — as isolated as they may appear at the moment — who continue to work and hope in daunting circumstances.

As members of that same international community that supports the struggle for justice, we all should reflect more on how to capitalise on the small gains that have been made in prosecuting serious crimes, and encourage the Congolese judiciary to pursue those few emblematic cases that may generate some confidence in the national institutions — and open more opportunities for future successful prosecutions.

Victims in DR Congo, no matter how resilient they may have become, have a right to see justice done.

Today is International Justice Day. The ICTJ has published a key report analysing the response of the judicial authorities to international crimes committed in the DRC from 2009 - 2014, with a particular focus on North and South Kivu and Ituri. Click here to read it. 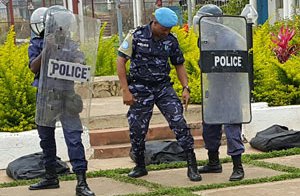