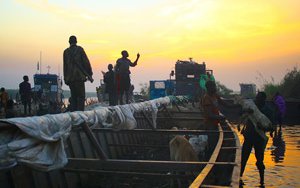 The peace talks between rival factions of South Sudan’s Sudanese People’s Liberation Movement (SPLM) have included new regional actors to help to resolve the country’s political problems - among the most influential being Tanzania and South Africa.

The talks appear to be from the school of “African Solutions to African Problems”, of which South Africa is a key proponent. However, this approach may annoy regional powers such as Ethiopia, Kenya and Uganda. Sudan’s presence further complicates the status of IGAD (the Intergovernmental Authority on Development, a trade bloc in Africa) in handling the mediation.

If IGAD is going to continue to be the main negotiating forum, the peace talks need to be handled carefully, and with these regional differences in mind. If not the process may collapse, just like the Doha-based Darfur peace process. The ruling parties of South Africa and Tanzania should be careful as the possibility of creating friction between IGAD member states and themselves is high.

IGAD’s “mixed approach” of trying to secure a ceasefire without the guarantee of a quick political settlement is very difficult to apply when politics has become militarised. IGAD’s position would have been much stronger if it could have first secured a ceasefire and ensured that this was honoured by all parties, but this was problematic because of Uganda’s support for the government.

Ideally IGAD would have established the ceasefire then moved on to political negotiations and finally focused on how a transitional government was going to implement the peace agreement. By conducting political negotiations without securing a ceasefire, IGAD allowed parties to use their typical strategy of bargaining for political power by using military force.

This theory has commonly been applied by revolutionary leaders in the IGAD region. Bear in mind that some of these leaders are friends to the warring parties and sitting heads of state and government. As an institution at the mercy of its members, IGAD has to try to ensure that its mediation tactics reduce the opportunity for political interference by its leaders.

The prominent role of the Troika (US, UK, and Norway) as partners of IGAD and South Sudan in supporting the settlement of its political differences is not welcomed by all African states. Some African states felt the Troika had undermined them during the Comprehensive Peace Agreement process that ending the conflict in Sudan in 2005, and have used the current crisis as a chance to retaliate. Among the most influential in this group are Ethiopia and South Africa.

The African states' belief in an “African Solutions for African Problems” approach is frustrating for the Troika, who find it hard to exert influence on IGAD states such as Ethiopia, Uganda and Kenya because they are also crucial partners in fighting terrorism in the region.

In January one of South Sudan’s vibrant civil society organisations, Community Empowerment for Progress Organization (CEPO), said an agreement should be reached in order to break the link between the military and politics (the majority of SPLM politicians are either military personnel or people who have served in the military). They said:

The origin of the violent conflict in South Sudan were due to an internal SPLM leadership crisis; and if all the members of the party are able to reach an agreement that will address the competition for internal party leadership, then this is healthy for the nation to end the suffering of the internally displaced persons.

The SPLM leadership crisis has put the country at hostage, with lives and properties lost. Using stronger terms, CEPO urged the warring parties of South Sudan to sign an agreement that they will honour, because several agreements were signed and violated.

It is vital that a comprehensive programmme for peace, reconciliation, national unity, healing and promoting amongst citizens of South Sudan should be developed and implemented. In order to ensure peace and security in South Sudan, there needs to be comprehensive reforms of all security sector institutions and to ensure that their composition reflects the national character of South Sudan.

South Sudan’s peace talks need not be an alternative approach that undermines the IGAD process. Instead they should open the way for IGAD to follow the approach of solving African problems through African solutions.