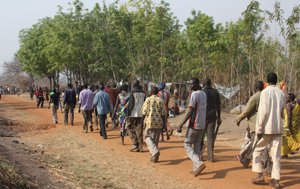 South Sudanese citizens fleeing from war in 2014. On the fifth anniversary of the country's independence, many have been forced to flee once again. Image credit: European Commission DG ECHO/Malini Morzaria

The conclusion of a long, drawn-out negotiation process with the signing of the peace agreement renewed a sense of hope for the restoration of peace and stability in the country. Pundits and critics of the process acknowledged that the road towards stability in the world’s youngest nation would not be a smooth one.

Just as swiftly as our spirits were lifted, our hopes again shattered
For the first time since the onset of deadly fighting on 15 December 2013, we started seeing rays of hope. This was welcome news to the people of the South Sudan and the region as a whole. For the first time in what seemed like an eternity, we would be able to celebrate South Sudan’s independence as a unified country in which no-one was left out, as was the case in 2014. Or so we thought.

The arrival of the First Vice president into the country, and indeed the brigades of the SPLA-IO with him, after those many months of fighting, signaled an end to the suffering of our people and the beginning of a new chapter in our history. We celebrated, albeit with reservation, our mothers ululated, and everyone could feel the sense of hope in the air. But that was to be short-lived.

Just as swiftly as our spirits were lifted, our hopes again shattered with the onset of the first bullet, that tore the peace of the hopeful town and sent the capital into disarray.

Soldiers from both sides supposed to be protecting our civilians and property through the peace agreement were wreaking havoc on the streets. Soldiers supposed to be integrated into the new shared unified military command were now at war with each other, using heavy artillery and high calibre weapons.

It all began with an altercation at a road block mounted by the SPLA military along the Jebel road, which is also the location of the UNMISS camp and the base of the SPLA-IO. This left five soldiers dead and many wounded. A hopeful town had just become a battleground, a war-zone.

During the past three days heavy weaponry, helicopter gunships and RPGs were unleashed inside Juba town
Sceptics of the rushed peace agreement had warned that there was still fragility in the country, given the volatility of the two sides and the concessions each was forced to make during the peace negotiations by the regional body IGAD.

This warning became a reality in the capital Juba after soldiers loyal to Salva Kiir and Riek Machar clashed on Thursday, triggering intense fighting that went on over the weekend.

During the past three days (8-10 July, 2016), heavy weaponry, helicopter gunships and RPGs were unleashed inside Juba town. Civilian houses have been shelled. Government helicopter gunships circled Juba’s skies, driving fear and panic into the general public. Even the historically inviolable UN premises have been hit and lives of peace keepers lost whereas some have been wounded.

It would appear that the Generals (Salva Kiir and Riek Machar) have lost some command or the respect of their senior generals. This is clear especially given the fact that on two occasions, they have condemned the violence and called for ceasefire but, frontline officers have disregarded their directives. This is a point of concern for us and the general population.

It may just signal a deadly state of affairs which if not mitigated could result in anarchy and massacre in the country. It may even escalate further and become even worse than the fighting on 15 December 2013.

South Sudan’s fifth Independence Day celebration. This was meant to be a day of joy, a day of celebration. A day where fireworks should have filled the sky, not bullets! Certainly not RPGs and helicopter gunfire.

It’s day three of violence and people are holed up in their homes
Gunfire and heavy explosions are being heard all around the capital. People are stranded in their homes and others are hiding in places with no access to clean water, food or basic supplies. Those within the UN camps are unsure if the sanctity and inviolability of the UN premises is going to be observed, honoured, respected by the soldiers in the streets and those in the helicopters sending rockets towards civilian sites.

It’s day three of the violence and people are holed up in their homes, under the tents in the UNMISS camps. Children have been driven into panic. They know too well that they cannot cry because it may attract the shooters.

My colleague and friend’s husband works with the National Police, and on Sunday 10 July she woke up to her house under siege by military officers. She couldn’t understand why these military officers had surrounded their compound and were firing into the residence. Her husband is a long serving officer with the Government. She, together with her children, was sprawled on the floor, her kids wailing, not knowing what the deafening noise was all about. Wondering when it would all stop so that they could go out in the garden and play.

She is just one traumatised mother, wife, daughter, sister. She is a representation of the many other people in Juba and around the country who have gone through the same experience over and over in the past week.

When does it stop? I couldn’t answer back. I am just as lost and as scared as she and her children, just as the whole civilian population is. Who is going to come to our rescue this time? Are we so unimportant to warrant only statements and prayers and wishes?

There is some calm now, with less gunfire, some relief to the civilian population, but still caution in the air as there is no guarantee that you can walk from one end to the other in the capital without a bullet in your head.

As a member of the Transitional Justice Working Group (TJWC) through the South Sudan Law Society and the Collaborative for Peace, I supported a statement calling on the leadership of both sides to rein in their forces and stop the killings. The same has been done by IGAD, AU, American Embassy, AI and many other bodies

“We are deeply concerned and troubled by the rapidly deteriorating security situation in Juba and the rest of South Sudan and extend our sympathies to the families of those who lost their lives on the eve of our Independence and in all clashes before it.”

It is upon President Salva Kiir and First Vice-President Riek Machar to recommit and dedicate their attention and personal time to the full implementation of the Agreement on the Resolution of the Conflict in the Republic of South Sudan.

The regional body (IGAD) that midwifed the rushed but nonetheless pacifying peace agreement has remained silent. Only President Omar El-Bashir of Sudan has urged the two generals to stop the war and prevent deaths. Ugandan troops on the other hand have been directed to move to the border with South Sudan in order to prevent any “spill over” of the war. What happened to the granting of access to victims of war especially when the whole region knows only too well what could happen to unarmed civilians? Hypocrisy!

In a statement issued on Saturday on the outbreak of fighting in Juba on 7 and 8 July, the US State Department underlined the need to implement the security arrangements:

"We have urged South Sudan’s leaders to operationalize the security arrangements in the agreement, particularly by establishing Joint Integrated Police units to patrol Juba, empowering the Joint Operations Center to ensure communication and coordination between forces in Juba, and directing the Joint Military Ceasefire Commission to operate continuously."

We must act fast

We need the regional body and actors to rethink
My personal opinion is that there is a need for the regional actors and the international community to act fast in order to help forestall another genocide in the making, right under the watch of the UN.

If the UNMISS mandate can be revised and strengthened, they can better protect the civilians under their care and even those in civilian areas. The UN Secretary General had indicated in his earlier communique that the Security Council is considering a review of the UNMISS mandate, and the structure and form of the force.

Even if there will be a need for a demilitarised zone that takes form and shape of the Green line (Nicosia- United Nations Security Council Resolution 353) so be it, but people need not die in droves like this. This is madness, utter disgrace and greatest affront to the sovereignty of the country.

We have seen families spending the last three nights in terror, hunger and cold just because there is nothing they can do since our leaders seem to give empty ceasefires and declarations whilst their commanders rein terror and destruction all around. We need the regional body and actors who midwifed this peace agreement to rethink and strategise on how this is going to be handled moving forward. We need national leadership and a stop to these killings.

Since Friday we have lost more than 200 lives, both military and civilian. What will it take for our leaders to realise that they are depleting the numbers and the hopes and faith of the very people they swear to protect and claim to lead? At what price will they quench their thirst for leadership and power?

We may write letters and press statements to the leadership, condemn the acts, send signals of despair and desolation. But if the state of affairs remains the same, and if the status-quo remains unchanged, unfazed and unmoved by the recent happenings, we are in for a bloodbath in South Sudan.

We greatly welcome the announced ceasefire in Juba today after many days of armed fighting, looting, violence against civilians, and displacement. We hope the apparent ceasefire holds, and that security can quickly be restored in the capital and in other areas where violence has occurred. The international communities including IGAD, the United Nations and other regional key players have critical roles to play in the coming days and weeks ahead to build structures to keep the peace and hold the parties to security commitments. 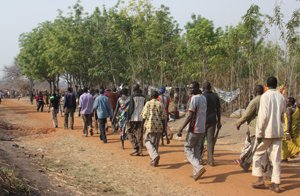