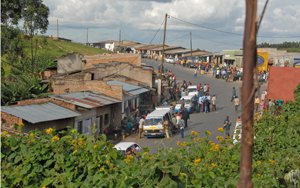 The road to Bujumbura. Many areas of Burundi have seen serious violence during the deepening political crisis of the last 12 months. Image credit: Dave Proffer

Since protests began a year ago – and especially since an attempted coup nearly unseated President Pierre Nkurunziza in May 2015 – the situation in Burundi has steadily deteriorated.

More than a thousand people have been killed, with the worst violence so far taking place in December 2015. Armed attacks on military installations around the capital Bujumbura, and the fighting that followed, led to the deaths of over a hundred people. With the Burundian civil war still fresh in people’s minds (it officially ended in 2005), events such as the December attacks have increased fears of a return to serious armed conflict. And this, in turn, has contributed to a regional refugee crisis. More than 250,000 people have so far fled to neighbouring Rwanda, Uganda, Tanzania, and the Democratic Republic of Congo.

But as the international presence dwindles – the US and other governments have issued broad advice against travel – Burundians are redoubling their efforts to stop a return to war. Some of them work for Peace Direct's local partner organisation, a violence monitoring and response network. We went to visit them in March of this year.

I would be surprised if anything happened in Burundi without them knowing about it
At 8am on Monday morning, we are the last to arrive at the office on our first day in Burundi. Our host, Fabrice, shows us straight to the meeting room. In it are a table, some plastic chairs on a hard tiled floor, and the network’s central staff. They run what could almost be described as a small news agency, with a network of volunteer ‘Citizen Reporters’ reporting from around the country on outbreaks of violence in their area. We are here to see first-hand how our support to their work has helped.

I’m impressed. The network has doubled in size in just three months, and their work now covers the entire country. As we listen to the team discussing their work, it occurs to me that I would be surprised if anything happened in Burundi without them knowing about it. Having driven past the burnt-out offices of the main national radio stations – the usual source of information in the country – the situation reports the network provide are a priceless source of information that only local people can access. Testament to the quality of the information are the continuing requests we receive from people who want to read the reports; probably half the UN is on our mailing list.

Fabrice and the team take us in detail through how the network operates. The Citizen Reporters have received training on how to assess and report information, which they send in from around the country using a specialist mobile text messaging system. Each of the messages is logged, assessed for its relevance to the developing situation, and then verified by the staff in Bujumbura. They cross-check incident reports with other Citizen Reporters, any publically available information, and the network’s own contacts in the police, military and elsewhere. The reporting is risky, so they take lots of precautions.

Their operation is building a picture of violent hotspots in Burundi – an ‘Early Warning’ network in every province around the country. With international reporting capacity generally limited to the capital, it provides an almost unique source of countrywide intelligence, which is why the UN is so keen to receive it.

Indeed, the whole project is testament to how a local network can penetrate much deeper into society than outsiders. The Citizen Reporters all live in the areas they report on, and are respected in their communities for their neutrality. This is vitally important in a conflict which is as much about politics as anything else.

Responding to conflict: the role of the Citizen Reporters

“Sometimes when we ask [the police] for the charges against people, they ask us what authority we have.”

“‘So it’s you who works with Human Rights Watch,’ they say.”

This is meant as a generic term for human rights groups, and it’s clearly intended as a threat – one that prevents people from trying to find out what has happened to their friends and family. This is where the Citizen Reporters help.

“We try and support people to ask after their own,” Jean says. “We go with them when they ask the police and the military for information, acting as witnesses in case anything happens.”

“I spoke to the mother of a girl who had been kidnapped,” says Jean. “She thought her daughter was going to be sexually abused, so she called the police. They arrested every young man in the neighbourhood and tortured them.”

Others are presumed guilty by association, “I know a guy who was arrested three times in a week,” says Claver. “If he was really involved in anything, why would they release him?”

The power of working together

The network is a powerful example of how bottom-up initiatives can help solve top-down problems
Between them, the network coordinates nearly 200 Citizen Reporters around the country – reporting on and responding to violence. They work as a team, to gather information and send it to us. We then distribute it to diplomats, journalists and other peacebuilders themselves, to try and prevent atrocities.

“When we hear of something, we communicate among ourselves. Have you heard about this? Are you able to go and find out? We have to plan, because sometimes you need to take a motorbike and there are roadblocks.”

It’s a reminder of the logistical difficulties that the network faces, trying to separate fact from fiction and piece together what’s really happening in Burundi. Not for the first time, I’m impressed at how much a small group of dedicated people can accomplish.

And as Claver explains, help can come from unexpected sources. The situation is complex, so it is important not to generalise: “Some of the police are cooperative, and they help us. They tell us very discreetly where people are being held, and other information. We can work together.”

It’s an extremely worrying situation. But I leave convinced that this net­work is proof that bottom-up initia­tives can help solve top-down political problems – building trust from the ground up. It gives me hope for Burundi.

Names and other information in this article have been changed in order to preserve anonymity.

Conflict prevention and early warning Dialogue and mediation
Disclaimer: The views expressed in this article are those of the author and do not represent the views or position of Peace Direct.

More on Conflict prevention and early warning and Dialogue and mediation →