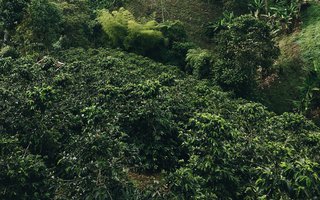 In 2014 when I was working for a humanitarian organization in Colombia, I found myself in Putumayo walking amidst a mined area surrounded by coca crops (the raw plant used to produce cocaine). Contrary to the image that is widely portrayed by mainstream media, I did not find criminal gangs guarding the area, nor did I meet a mythical capo or his servants in the style of the infamous Pablo Escobar. Instead, I found extremely poor campesino families, with red eyes and irritated skin, anguished by the damage to their food crops and concerned because they just lost their livelihoods. Their territory had recently been sprayed with an herbicide called Glyphosate by a military aircraft in an attempt by the Colombian government to halt the production of cocaine. When I visited again in 2016, I saw these families filled with hope from the transformative potential of the historic Peace Agreement signed between the Colombian government and the Revolutionary Armed Forces of Colombia-Army of the People. (FARC-EP).

Contrary to the image that is widely portrayed by mainstream media, I did not find criminal gangs guarding the area, nor did I meet a mythical capo or his servants in the style of the infamous Pablo Escobar.

Central to the Colombian Peace Agreement is the notion of “territorial peace,”[1] a concept which opens the possibility to build peace around the right of local communities to influence the decision-making processes that impact their everyday lives, such as land-use planning, management of natural resources, education and livelihoods. This requires an effective process of decentralization and the recognition that territories are more than just geographic units, as they are also composed by identities and lived experiences of the communities that inhabit them. In this sense, “territorial peace” suggests that the most critical issue to support peacebuilding in Colombia is not the laying down of weapons by the FARC, but the transformation of the regions most affected by violence through the empowerment of local communities.

A landscape for local agency

At the core of that transformation is giving agency to thousands of families in the country’s most isolated and rural areas like the one I visited, where economic alternatives to growing coca are very limited. To this end, a chapter of the Peace Agreement was devoted to ‘the Solution to the Problem of Illicit Drugs’, and the National Comprehensive Program for the Substitution of Crops Used for Illicit Purposes (PNIS) was created. Although the program focuses on technical support for the substitution of coca crops, the Peace Agreement recognizes that the problem of drug production and trafficking must be addressed as part of broader rural development initiatives, which include land tenure, poverty alleviation, infrastructure and access to basic services. Sixteen Development Plans with a Territorial Focus (PDET) were created to prioritize these issues with the participation of local communities.

the problem of drug production and trafficking must be addressed as part of broader rural development initiatives, which include land tenure, poverty alleviation, infrastructure and access to basic services.

However, the political landscape in Colombia has significantly changed after the signing of the Peace Agreement. In 2018, President Iván Duque, whose party campaigned against the approval of the Peace Agreement, won the election on a promise to “fix its shortcomings”. Since he took office, his administration has delayed its implementation by targeting the PNIS program, among others. In 2017, Colombia had reached an all-time high of 171,000 hectares in coca cultivation. After Duque took office, he announced his plan to complement crop substitution (which is facing important budget cuts) with forced eradication, including a return to aerial spraying of herbicides.

If this setback in policy is approved, it will impact the lives of the many Colombians that live in these territories. It also represents the return of a militarized intervention similar to the U.S-backed Plan Colombia, which has already proven to be ineffective and have unintended consequences, such as:

In light of such a discouraging outlook, we must insist on the importance of territorial peace and the empowerment of local communities. The government must stand by the promises made to more than 99,000 families that committed to voluntary substitution, like the ones I visited in Putumayo. So far, 34,767 hectares of coca have been eradicated under this program, which shows a compliance of 94%. The best way to curb coca production in the long-term is to support families to transition into legal economies and build enabling environments for such transitions. Advocating to resume aerial spraying is a mistake, not only because of its ineffectiveness and negative consequences, but also because it hinders local agency and the possibility to (re)build relations between the State and rural populations that have endured and resisted so much violence after more than fifty years of war.

The government must stand by the promises made to more than 99,000 families that committed to voluntary substitution, like the ones I visited in Putumayo.

[1] It is important to note that territorial peace means different things to different political actors in the Colombian context, to a large extent because the Peace Agreement does not provide a specific definition.

Guest blogs on Peace Insight present the views and opinions from contributors on issues relating to conflict and peacebuilding, and do not necessarily reflect those of Peace Direct.

Development Transitional justice and reconciliation Environmental peacebuilding Governance
Disclaimer: The views expressed in this article are those of the author and do not represent the views or position of Peace Direct.