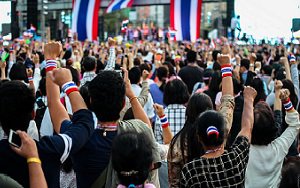 Citizens are using nonviolent acts of defiance to express their discontent with the current regime. Image credit: Victor Dumesny
Mass demonstrations have been instrumental to the tit-for-tat overthrow of governments
On May 22, 2014, Thailand witnessed its 12th military coup. Its backdrop is a decade of colour-coded conflict that has pitted traditional feudal elites (dubbed ‘Yellow Shirts’) made up of aristocrats, military factions, established military groups and Bangkok middle class, against elected autocrats and emerging middle class from the provinces (dubbed ‘Red Shirts’), spearheaded by Thaksin Shinawatra and his political parties.

Causes of this polarisation range from political openness in the 1990s, and a growing economy that has empowered divergent political actors and challenged the national ideology, resulting in elites’ hegemony being eroded. These factors have culminated in an escalation of protracted conflict over governmental legitimacy. In this conflict, mass demonstrations have been instrumental to the tit-for-tat overthrow of governments backed by either Red or Yellow Shirts as evident in 2007, 2008, 2009, 2010, and 2013-14. Observably, Yellow Shirt demonstrators usually call for military coup to end their opponent’s rule, and in 2006 and 2014 the army responded to such a call through intervention. In 2014 in particular, the army justified its intervention by associating violent attacks against Yellow Shirt protesters with an imminent outbreak of civil war.

Despite systemic repression, nonviolent defiance to the Thai junta still thrives
Despite imposed draconian laws, systemic repression, and political idleness by Red Shirt leaders, nonviolent defiance to the Thai junta still thrives. Individuals – especially university students – have persistently staged symbolic protests. A prominent action is students simply eating sandwiches during their gathering. The students have also brilliantly adapted the well-known symbol from the blockbuster The Hunger Games by raising the 3-finger salute in public. When the film was screened in Thailand, students organised an event distributing free tickets at a cinema, in downtown Bangkok, and collectively flashed The Hunger Games salute in front of a large publicity poster of the film.

Students also formed a coalition with human rights lawyers, artists and writers, under the name ‘Citizen Resistant’. On Valentine’s Day, they staged the street performance ‘My Dear/Stolen Election’. This involved an activist placing a ballot box on the street. As expected, the secret police stationed in the area swiftly took it away, reflecting the junta’s hyper-anxiety over anything related to democracy. After being charged for staging this nonviolent activity, members of ‘Citizen Resistant’ marched to a police station, giving themselves in, and at the same time filed a lawsuit against coup makers for their constitutional seizure of power.

At times, individuals’ courageous acts of defiance inspire further anti-regime activities of students. Their symbolic protests include holding a banner that reads ‘No Coup,’ shouting ‘I’m so embarrassed that Thailand still has military coup!,’ and wearing masks emblazoned with the message ‘People.’ A group of citizens also came up with the idea of reading George Orwell’s masterpiece 1984 at monorail stations to demonstrate the current state of censorship and surveillance in Thailand.

Citizens have recited Orwell's 1984 at monorail stations to protest censorship
Apart from students, villagers whose natural resources are grabbed by corporations in collaboration with local military units have voiced their grievances. Journalists have helped them by publicizing military abuses. At the same time, academics, activists and artists – through op-eds, public seminars and theatre performances – have pointed out the junta’s deficit in legitimacy, and demanded the return to democracy.

Junta propaganda portrays nonviolent, pro-democracy protesters as troublemakers
The current junta does not tolerate criticisms or subversion of its authority. Public disagreement has been outlawed and punishable by Martial Law, lèse majesté (alleged offense against monarchy) and section 44 of the interim constitution. This has resulted in the militarisation of the juridical process where individual suspects can be detained arbitrarily, civilians tried in military courts, and a military unit set up to investigate crimes on behalf of the police. After the coup around 751 individuals were summoned between May 2014 and May 2015. At least 22 of them were pressed with charges after the summonses, and six of them were prosecuted with lèse majesté. Meanwhile, at least 71 public academic events, theatrical performances and movie screenings faced intervention or censorship by the military.

Double-speak has become a common practice camouflaging the harshness of repression. The junta uses terms such as ‘attitude adjustment’ to refer to to arbitrary detention, ‘national harmony’ to refer to the suppression of dissidence and ‘returning happiness to the people’ to refer to unconstitutional seizure of power. This propaganda aims at portraying the junta as a national security defender in contrast to democracy advocates’ image as troublemakers in the process to save Thailand from the brink of civil war.

The people are carving out a new political imagination where nonviolence, freedom and tolerance constitute the foundation of political culture
The Thai junta has ruled for a year and a half, promising to leave in 2 years after finishing its ‘house cleaning.’ Many have wondered if the nonviolent activism detailed above has born any successes. If the criteria of assessment is the junta being removed, it obviously fails.

But if the criteria is the extent to which these pro-democracy networks have sustained hope for better days in Thailand, I would say yes. Yes, they succeeded in reminding us day in and day out that the struggle for democracy continues relentlessly. Because democracy is hard to earn given existing political structure in Thailand, we – the people – are carving out a new political imagination where nonviolence, freedom, and tolerance towards differences will constitute the foundation of our political culture. Anti-regime activism in Thailand not only denotes resistance against the incumbent junta, but it is projecting a trajectory of political future for the next generation to come.