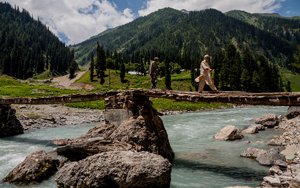 Image credit: sandeepachetan.com travel photography
The UN recently termed current tensions as the ‘worst bout of fighting in the region in nearly ten years’
Tensions have escalated recently between India and Pakistan in the backdrop of an increased military activity on the Line of Control in Kashmir, with a reported surge of gunfire and mortar shelling.

Besides a number of casualties of soldiers, above 100 civilians have been reported as dead, many more are being treated in hospitals.

The Indian and Pakistani armies blame each other for violating the cease-fire agreement.  India accuses Pakistan of making 250 ceasefire violations this year, including 17 breaches in this month. Conversely, Pakistan claims that India has broken the peace agreement 90 times in the past two months.

The UN recently termed current tensions as the ‘worst bout of fighting in the region in nearly ten years.’ However, UN Secretary-General Ban Ki- moon’s appeal to India and Pakistan for ‘resolving all differences through dialogue’ was in vain, with both parties continuing to display military power and failing to engage in meaningful dialogue.

In many cases, civilian houses are located just a stone’s throw away from military posts. They do not have any safe bunkers to take refuge from cross border shelling and firing. They complain that they are forced to live in an environment of constant fear, anxiety and psychological disorder. The victims of current cross- border shootings include a large number of wounded women, children and elderly people who struggle to access emergency treatment in an absence of adequate emergency health services.

Gulnaz Bibi is one of many who were affected by the violence.  Her house was turn into rubble when Indian troops shelled the village of Nakial along the Line of control in Pakistani Kashmir.

“I was cutting fodder for my cattle when the Indians started gunfire. The firing was so prompt that I could not find any safe place”, she added.

In the wake of the latest clashes between Indian and Pakistani troops, 100 families had fled their villages to take cover in a forest. According to local officials, Indian shelling forced 15,000 people to evacuate their homes.

On the other side of the border, the fate of the civil population is the same. Civilians face daily shooting from Pakistani guns. Their villages have trenches and installations of Indian border security forces that receive Pakistani shelling and firing. When cross border fire occurs the Indian forces take refuge in the bunkers, leaving the civilians to become the prime victims of the retaliation, locals say.

Sham Lal, 26 years old, is a resident of border village Abdullian, who lost his elder brother in the shelling along the border. “We have lost everything,” he says.

Diplomatic efforts to de-escalate the on-going rivalry appears futile.  On August 30, the Commonwealth Parliamentary Conference was cancelled when Islamabad ruled out inviting the Speaker of Indian controlled Kashmir Parliament, saying that ‘it does not recognize the State Assembly as legitimate’.

Islamabad claims that only representatives of local parliaments from the States or provinces of Commonwealth Union are entitled to join, hence, ‘being a disputed territory Jammu and Kashmir Assembly speaker could not be invited’.

Meanwhile, heightened border tensions tarnished the India Pakistan peace efforts when both countries aborted a scheduled meeting of their National Security Advisors (NSAs). India wanted the negations to focus exclusively on terrorism, asserting that ‘Pakistani Security Advisor Sartaj Aziz could not meet Kashmiri pro-independence leaders’, whereas, Pakistan did not accept ‘preconditions’ before the talks.

Amid fresh border tensions and diplomatic stalemate between two major South Asian players, public hopes for permanent peace in the region are not daunted.  The peace bus and trade Services between the divided parts of Kashmir are still operational.

Normal people in Kashmir who are sandwiched between two nuclear nations vehemently condemn the mounting tension.  On both sides of Line of Control civil society and sane political voices are urge India and Pakistan to exercise restraint and resume talks to resolve contested issues.