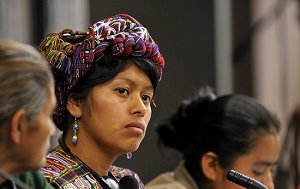 Discussing the situation of women who have suffered from the conflict in Guatemala, at the human rights commission of the Organization of American States. Image credit: OEA - OAS.

It has been almost two decades since the signing of the 1996 Peace Accords in Guatemala, which ended the horrific civil war between the Government of Guatemala and the Unidad Revolucionaria Nacional Guatemalteca (URNG).

The people of Guatemala deal everyday with crime: gang activity, drug and human trafficking, child exploitation and violence. Education, employment and health systems are poorly developed, criminal activity is particularly strong in rural areas, and discrimination towards indigenous people is rife. 20 years later, you could be forgiven for wondering: is peace actually being built?

Despite some of these problems, the answer is definitively yes. And women – who have suffered as victims, but are equally agents of change – are vital to solving them. They are playing a key role in the peacebuilding process.

The trouble with being a woman: gender-based violence in Guatemala

Indeed, for the last 20 years, Guatemalan women have suffered from gender-based violence. Indigenas in particular were targeted during the war, being raped, beaten and used as sex slaves. Today, targeted killing of women in general – femicide – is also taking place. Guatemala has experienced a rise of the “intentional murder of women because they are women”. Newspaper articles are published every day about women and girls who have been raped, tortured, mutilated, and killed.

Victims of sexual violence almost never see the perpetrators punished
Their body parts are tied up in garbage bags or abandoned in ditches – “this is Guatemala," as one report put it. Whilst a lack of effective reporting makes it difficult to measure the scale of this violence, Amnesty International has put pressure on the Guatemalan government by denouncing the failures of investigations led by the authorities; victims of rape and sexual assault almost never see the perpetrators punished, with a conviction rate of less than one in ten. As such, women are victims not only of the violence, but also the delays in securing justice. Not just victims, not just giving in: the role of women in fighting for change

Yet it would be wrong to see Guatemalan women solely as victims . They are not devoid of resources and they have the energy and dedication to make change.

Indeed, their involvement in the making of Guatemala’s future has been visible throughout its violent history. The National Coordinating Group of Guatemalan Widows (CONAVIGUA) illustrates this involvement well.

Founded in 1988, CONAVIGUA launched a struggle against military oppression, impunity and the violation of human rights. The organisation works to strengthen the capacity and mobilisation of women, especially in rural areas. It carries out exhumations and burials of the remains of victims of the conflict in different regions throughout Guatemala.

In this context, CONAVIGUA played a key role as a Mayan organisation, bringing together Guatemalan women from all backgrounds and helping to shape the accords. Since then, CONAVIGUA’s work has been an important contributor to peace in the country, through a wide range of activities.

For example, its Justice and Dignity programme has been developed in order to facilitate the aims of the accords. It provides legal, psychological and social support for victims and their relatives, as well as a keeping up the struggle to promote justice. CONAVIGUA is a central actor in the peacebuilding process.

Peace in our time? The continuing challenge for women of making their voices heard

The dual role of Guatemalan women demonstrates their key role. Their mobilisation and involvement in Guatemalan society as a whole is crucial to the evolution of the peacebuilding process. But CONAVIGUA’s members regularly experience serious threats and aggression. In order to deal with these critical security issues, and in order to be able to carry on its work, CONAVIGUA has been accompanied by Peace Brigades International since 2003.

Becoming activists makes women all the more a target; their gender and activities being used by their attackers to justify the violence against them. Both victims and drivers of peace, women are therefore at the heart of the slow peacebuilding process in Guatemala: demonstrating the importance of integrating women into not only peace accords, but also post-conflict policies.

Sophie Helle is a Master's graduate and has worked on several different human rights projects.
Read more from Sophie Helle 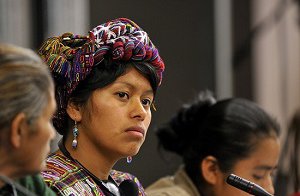