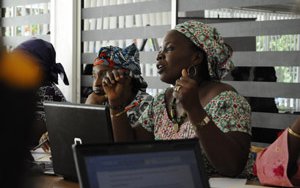 In conflict, men and women suffer. It leaves a lasting impact. But in the aftermath of conflict and the ensuring peacebuilding efforts, women are seldom involved. They have tremendous potential but it is rarely realised, with women often invisible or under-represented in peacebuilding. This is a problem. No matter how many experts there are at peacebuilding initiatives, they will never succeed if an entire demographic is excluded from participation. Even with the UN’s landmark resolution on women in peacebuilding, they tend to be conspicuous by their absence.

The involvement of women in peacebuilding should be driven by two key factors. One, that they form half the population in any given conflict zone, and therefore half the potential peacebuilders. And two, that they form half of the potential victims of conflict – and often suffer disproportionately from discrimination, violence and human rights violations.

But women are often excluded, at four main levels.

At the international level, there are institutional structures constituted for the process of peacebuilding, the UN prime among them. While on one han there is a slew of resolutions testifying to the role that women have to play in peace initiatives, on the other, implementation is found wanting. While Resolution 1325 emphasises the need for change, that change is yet to come.

At national level, most governmental structures do not have room for peace and policies relating to post conflict reconstruction. In the aftermath of a conflict, national structures are invariably struggling to work hard to reconstruct themselves from scratch – or at the very least, from the ashes of the conflict. In the process, their attention to gender as a component of peacebuilding remains limited at best. Pre-existing entities retain power, and the pre-existing dominance of men in politics keeps the gender divide alive.

The third factor is the structural isolation of women, with social norms dictating that women be kept away from the peacebuilding process. Women are often perceived to be unimportant or unable to contribute. This stems from a gendered understanding of violence in which men both commit and resolve violence and conflict. This enforces the absence of a role for women in conflict and post-conflict situations.

Finally, women are often occupied with the struggle to survive. The spirals of violence and discrimination that occur in conflict and post-conflict societies isolate women and constitute a barrier in their path to the negotiating table. Caught in conflict, people often focus purely on their immediate needs. For women, this can involves bringing a semblance of normality to family life. In the process, they themselves do not give a process of peacebuilding priority, because their urgent need is to find a way to keep themselves and their dependents safe, secure and free from the threat of violence.

To address these issues, peacebuilding processes should be broadened. Women should be funded, trained and included in every aspect of conflict settlement. And men must be trained as well. Peacebuilding does qualitatively better when all parties are involved. Women bring many qualities to the negotiation table: inclusiveness, sensitization to the overall need for peace, and an attention to social and economic issues that is otherwise seldom taken into consideration. Women bring an alternative, gendered view to peacebuilding that leads to real transformation at all levels. Conflict cannot become peace if half the population does not have its needs dealt with. And those needs cannot be dealt with if they are not included in dealing with them.