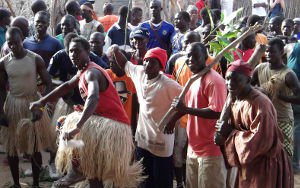 Young people in Abéné. Young men in particular have sometimes turned to violence in order to fulfill societal expectations that they will establish and maintain a household. Image credit: Martin Evans.
There are complex relationships between youth, opportunity and conflict in Casamance
Observers of Senegal’s Casamance conflict, and members of the separatist rebel movement itself - the Mouvement des forces démocratiques de la Casamance, or MFDC - note that while it has the invidious distinction of being West Africa’s longest-running civil war, it has not seen brutality and human rights violations to the extent witnessed in some other countries in the region.

The conflict has been characterised for much of its duration by low-level insecurity, punctuated by occasional upsurges of violence and ceasefires or peace accords, but never quite resolved – leading to it recently being described (again) as lying ‘between war and peace’. And it has certainly not suffered the recruitment of child soldiers seen elsewhere: minors (young teenagers in this case) have probably only been involved in support roles in the MFDC, not directly in combat.

The complex role of young people in Casamance society

These points risk obscuring, however, more complex relationships between youth, opportunity and conflict in Casamance. Youth should be understood not just as a matter of biological age but crucially as a socially constructed status. It is about being young – from a teenager to well into their 30s for some – but also, for men, about aspiring to be and working towards becoming properly established and self-reliant, having their own household and being able to provide for it. In many Casamance societies, this process also involves secret initiation practices. Youth, then, should encompass the process of becoming a true adult.

That process can, though, be frustrated through lack of educational and training opportunities, unemployment, inability to access or create value from land through farming or house-building, being unable to marry through lack of means, and hence being prevented from establishing an independent household – and not being treated by elders and other authority figures as a full member of society to be respected and heard.

Frustration - a catalyst for violence?

Three generations have grown up harbouring suspicion of anything that 'Senegal' does
Such frustrations have been shown in other conflicts to be powerful forces driving young men, particularly, into rebellion, with the sense that they have something to gain (or at least nothing to lose) by attacking the established order. For Casamance, analysts – notably Vincent Foucher – have shown how the Senegalese state’s failure to provide jobs, partly the result of donor-imposed structural adjustment programmes, was key in provoking the outbreak of the rebellion in the early 1980s by creating a disgruntled underclass of young, unemployed men. They also came to view their grievances through the lens of a perceived (but heavily contested) historical wrong: that Casamance, the MFDC still claims, was never part of the French colony of Senegal and should not have been incorporated into it at independence – hence the insistence on separation.

Subsequent oppression by the Senegalese government drove the MFDC to a point where it saw no alternative but to wage an armed insurrection from 1990 onwards. All the former and current MFDC maquisards (guerrillas) that I have encountered in my own research thus harbour a mix of political, social and historical grievances coupled with bitter personal experience: they have been harassed or humiliated by Senegalese authorities or, worse, have seen family members brutalised or killed by the armed forces in the earlier years of the rebellion. Coastal fishermen in Kafountine. Stop-start development in Casamance has contributed to difficulties in building stability in the region. Image credit: Martin Evans.

Such feelings are hard to dislodge and a second generation has grown up, with a third following, in the maquis: in rebel bases and associated refugee villages in neighbouring Guinea-Bissau in particular, although elements of these dynamics can also be seen in The Gambia. They harbour resentment and suspicion of anything that ‘Senegal’ does. They are concerned about what would happen if they returned to Casamance (although others have done so) and, I have found, they mistrust researchers.

More troublingly, these are socially dysfunctional environments for young people: schooling is often limited while alcohol and sometimes cannabis are more available to them, and their fathers and grandfathers are in some cases still active maquisards who may make ends meet through armed robbery across the border in Casamance. Children are thus growing up in a culture of embitterment and with a sense that recourse to armed violence to resolve problems is justified.

Despite such issues and the wider demographic context – half the population of Senegal is less than 18 years old – youth have figured unevenly in development and peacebuilding interventions in Casamance. In the 2000s, the government of then-President Abdoulaye Wade tried to ‘buy off’ the Casamance conflict with development projects. These included the establishment of a much-needed university in the principal city of Casamance, Ziguinchor (previously the only universities in Senegal were in Dakar and St-Louis, long distances away).

Young people must be part of the solution

Youth associations have lobbied the authorities, accessed aid, cleared the growth from abandoned areas for farming and rebuilt houses
This project has, however, been fraught with stop-start development, inadequate resourcing and consequently student and staff protests. Other social facilities have been lacking after years of conflict and displacement – youth centres for dances and other events, and football pitches for inter-village tournaments – although entrepreneurial youth groups have sometimes sought resources and deployed their own labour to create these for themselves.

Indeed, youth have been central in the process, since the early 2000s, of the return of previously displaced communities (living as refugees in neighbouring countries and, more numerous, the internally displaced in urban areas of Casamance). Youth associations have lobbied the authorities, accessed aid, cleared the growth from abandoned areas for farming and rebuilt houses. But their efforts have often not translated into longer-term, meaningful opportunities to advance themselves in education and training and to earn sustainable livelihoods. Organisations that really try to address the needs of youth as a specific social group in Casamance are few, although YMCA Senegal is among them.

We might reflect on these points as many young African migrants continue to arrive in unseaworthy boats along the southern littoral of Europe (or die en route), including significant numbers of Senegalese and Gambians this year. Lack of opportunity in their home countries creates not just the immediate humanitarian tragedy that we see on television, but a less visible, long-term disaster for the majority still at home: hopelessness, frustration, alienation – and the risk, under the worst circumstances, of drifting into violence.

Martin Evans is a Senior Lecturer in International Development at the University of Chester. He has wide experience of Senegal and sub-Saharan Africa, including the conflict in Casamance.
Read more from Martin Evans 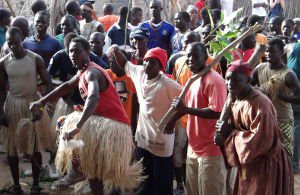