X
The Uganda section has been archived. This organisation profile is no longer actively maintained and may not be accurate. 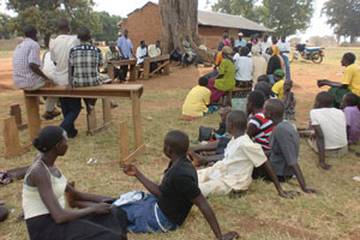 The Community Network for Social Justice (CNSJ) provides vital support and rehabilitation to vulnerable young people and former young combatants in Northern Uganda. It was established in 1999 in the Amuru district, an area that has been at the forefront of conflict between the Lord’s Resistance Army (LRA) and the Ugandan government. In 2009, backed by Save The Children Austria, CNSJ launched a five-year project called ‘Amuru child protection’, to help former child soldiers return to school or set up income generating activities. The organisation has provided psychosocial support and offered economic opportunities, rehabilitating vulnerable young people who were still suffering from the conflict.

Formerly abducted children are often rejected and excluded by their communities, and they risk being recruited again or drawn into crime. CNSJ’s work in promoting self-employment and educational opportunities has become vital to giving them a future away from violence.

CSNJ has also given particular attention to mental health issues. Offering psychological support is crucial in a country where many young people have been deeply traumatised by war, and suffer from post-traumatic stress disorder (PTSD). The organisation has formed ‘youth peace dialogue groups’ for counselling sessions where young people can share their thoughts, frustrations and fears, individually or as a group. The meetings are also an opportunity to engage young people in CNSJ activities and promote income generating activities. CNSJ has implemented a government-led agricultural programme, the National Agricultural Advisory Services. It set up a pilot goat husbandry project, to teach modern goat rearing techniques to communities in Palukere, in the Attiak sub-county.

CNSJ also worked with youth in internally displaced persons camps. With the support of the German embassy and other international donors, it promoted sport and cultural activities for young people. For instance, it has trained young people to set up music studios and record local music advocating for peace in Northern Uganda.