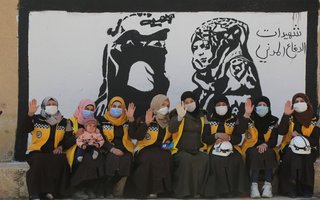 Photo by The White Helmets // The Syria Campaign

* The author is a peacebuilder and a campaigner working for a peaceful and democratic Syria, who wishes to remain anonymous due to security reasons.

During an event last year, Munir Mustafa, the White Helmets’ deputy manager, said something that has stayed with me until today. “Syrians are worth dying for, I promise,” he said to a group of his colleagues. His words still resonate in my head during moments of hope or when I am on the verge of giving up. How can someone like Munir, who must have endured unbearable tragedies and disappointments over the past years, still have such a clear sense of what to keep fighting for?

“Syrians are worth dying for, I promise,” he said to a group of his colleagues

A lot of people look at Syria today and see a war-torn country, devastated on every level. An oppressive regime that continues to deprive people of their very basic rights, including the right to life. Multiple states, militias and armed forces vy for control of territories to fight over, for the sake of their own agendas. Millions of children and young adults are living with trauma and have been denied opportunities for a better future. Tens of thousands of families are grieving and seeking answers on the fate of their loved ones.

But if we look closer, we can see so many Syrian activists, humanitarians and advocates, who have been doing amazing work for years. Both in Syria and in exile, they defy the most challenging circumstances to keep fighting for the values they called for back in 2011. Among them are the White Helmet volunteers who put civilians’ lives above their own in everything they do.

But if we look closer, we see so many Syrian activists, humanitarians and advocates, who have been doing amazing work for years

Whenever a warplane drops bombs on a neighborhood, we witness those brave volunteers running toward the scene as fast as they can to pull people from under rubble and evacuate the injured before the next strike hits. Many volunteers have been killed by double-tap airstrikes - this is when the initial airstrike is followed by a second one, killing rescuers and civilians who gathered to help the injured.

The volunteers still working for change

We saw Anwar Hmeidi, a White Helmet volunteer since 2014, mourning the loss of his whole family after he received a duty call about a bombing in his village Badama in Idlib countryside. He rushed with his search and rescue team, and found that the bombs had fallen on his home, killing his wife and three little girls.

On the way to the hospital, we saw Ibrahim al-Ibrahim and his fellow volunteers singing to a toddler in the ambulance to calm him down after his home in Jabal al-Zawiya, southern Idlib, had been bombed in December 2019. We saw Iman Suleiman, a volunteer at the White Helmets women center in Qorqania, northern Idlib, blowing her medical glove into a balloon while checking on a little girl to distract her from the pain she was in.

To support the health system in Idlib that has been devastated by years of systematic targeting and lack of resources and workforce, Randa al-Saghir, chief of the White Helmets women's center in Idlib, has been leading an amazing project. “A Medic in Every House”, trains women from different villages and ages on first aid so that they are able to provide live-saving care to their communities at times of emergency and bombardement.

I add my voice

When White Helmet teams go to camps to provide the most needed health care to families, we saw volunteer Abduljalil Ghannam taking out big baskets of toys and games from the ambulance. After the team has finished their work, they set up fun activities and play with the children at the camp to cheer them up and let them know that they’re not alone.

We saw forty volunteers working for hours to save a 10-year-old child who fell into a deep well, using all the technology and equipment they have to save his life. Heartbreakingly, the child had died by the time they were able to reach his body.

I could go on and on about the bravery and selfless devotion of the White Helmets and how far they’d go to save lives and help others despite being threatened and targeted by warplanes and by Russian and regime propaganda. For me, this organization is one of the best things to have happened to Syria in so many years. Being witness to the crimes committed against civilians, I believe Mounir and his colleagues will play a key role in our fight for justice and accountability in Syria’s future. The international community should continue to support their work.

For me, this organization is one of the best things to have happened to Syria in so many years

On the tenth anniversary of the Syrian revolution, I celebrate the amazing women and men of the White Helmets, and add my voice to the people of Idlib who chanted for them during the protests this week in appreciation of their work:

“Civil Defense, May God protect you!”

Thank you, White Helmets, for restoring my faith in humanity in such an unjust world.

For security reasons, we cannot publish the name of the author of this post.
Read more from Anonymous

Women, Peace and Security Health and counselling Transitional justice and reconciliation Children and youth
Disclaimer: The views expressed in this article are those of the author and do not represent the views or position of Peace Direct.

More on Women, Peace and Security · Health and counselling · Transitional justice and reconciliation · Children and youth →