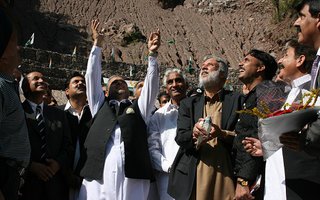 Emotional GDP has immense potential to make borders irrelevant
It was a day of tremendous hope in Kashmir when, in 2008, trucks laden with goods crossed Aman Setu (‘Peace Bridge’) for the first time in 60 years of conflict. The governments of India and Pakistan had agreed to open two routes across the Line of Control (LoC) for trade between the Indian and Pakistani administered parts of Kashmir. The move was termed as a historic confidence building measure, or CBM, partly in the hope that it might reinvigorate a peace process that appeared to be struggling to survive. As it turned out, the timing was unfortunate. A month later the Mumbai attacks drove the final nail into the coffin of the official peace process which, seven years on, is yet to be fully revived. At the same time, what is interesting from a peacebuilding perspective is that trade has continued, despite the diplomatic impasse following the Mumbai attacks and subsequent political upheavals.

What then has allowed trade to persist, despite political obstacles and the fact that there are inherent limitations to this trade? And what factors enable cross LoC trade to build confidence in the midst of prolonged conflict? While undoubtedly multiple factors are at play (most important being the direct economic and emotional stakes of traders themselves), the role of local institutional mechanisms such as the Jammu and Kashmir Joint Chamber of Commerce and Industries is fundamental.

What do we mean by ‘confidence building measures’?

CBMs are designed to build trust between parties to a conflict, to create a friendly environment for political negotiations. In the context of the Kashmir conflict, the meaning of ‘confidence building’ is itself embedded in the multiple layers of conflict. CBMs that seek to connect the two sides of Kashmir, including cross LoC trade, cannot be understood only as measures to bring the Indian and Pakistani governments closer. They play a role in symbolically softening a barrier between people living in Kashmir on either side of the LoC. They also demonstrate a commitment of both governments to take practical steps to alleviate the sense of alienation and victim-hood felt by the Kashmiri people.

A policy brief by the Kashmir Initiative Group says that CBMs are meaningful when they reflect predictable, consistent and accountable behaviour, arguing for them to be institutionalised. In other words, if cross LoC trade is to function as a CBM, it needs to be governed by a set of rules that are applied consistently on both sides, so that people involved in the process know what to expect. Traders, officials and others involved need to have a way to redress grievances when the system is not functioning the way it is meant to. Finally, if this CBM needs to realise its symbolic/sentimental value, then there must be a way for it to take root in the imagination of people in Kashmir who are its intended beneficiaries.

Trade across the LoC was initiated with a huge sense of celebration but is often seen as lacking some of the other supporting elements of sustainable CBMs. This is precisely where the Joint Chamber plays a pivotal role in enabling cross LoC trade, fraught with limitations as it is, to build confidence in a meaningful way.

The Joint Chamber of Commerce and Industries

The Joint Chamber has grown into an organisation with 48 members
In October 2008, businesspersons from the Pakistani side visited the Indian side of Kashmir and announced the formation of a joint platform – the Jammu and Kashmir Joint Chamber of Commerce and Industries. This subsequently emerged as the first-ever organisation with members from both sides of the LoC. Since 2009, Conciliation Resources, a UK based peacebuilding organisation, has been working alongside local partners with the Joint Chamber to provide practical support to the development of this institution and the trade process. This work was recently recognised with a 'Positive Collaboration Award' from international NGO umbrella body, Bond.

The Joint Chamber began with the established business chambers and federations in the capital cities on either side of the LoC. Gradually, trade associations were formed at the LoC to represent the traders directly. Meetings of the Joint Chamber have resulted in its members negotiating and signing three agreements on the constitution and working of this institution. These are all remarkable steps in a conflict-affected region that has never seen cross-divide platforms previously, let alone with such enthusiastic participation. Six years later, the Joint Chamber has grown into an organisation with 48 members drawn from 14 constituent business associations from across the different regions of Kashmir. It is becoming increasingly democratic in its functioning and acts as the glue between local traders, big business chambers, wider communities and the two governments. Its members represent a broad spectrum of religious, cultural, linguistic and political diversity. This forum has now gained the confidence and credibility to lobby governments for expanded trade. For example, when trade has been suspended on account of political level disputes, the Joint Chamber has played a role in advocating for its prompt resumption. Perhaps more than anything, it has made it possible for a wider section of society to associate with the trade process, despite setbacks. The words of its current President express this well:

More than actual GDP, what the trade process has brought to fruition is emotional GDP... I believe that this has immense potential to make borders irrelevant - Y.V. Sharma, President, Jammu and Kashmir Joint Chamber of Commerce and Industries.

What have we learnt?

Our work with the Joint Chamber has taught us three key lessons:

We hope the Joint Chamber can provide a blueprint for similar institutions, working across the LoC, to emerge. Ultimately intra-Kashmir CBMs, such as the trade initiative, reflect a prudent decision by the Indian and Pakistani governments to keep a small space open for positive engagement, even when the official dialogue process is dormant. Such collaborative institutions can ensure that these small windows do not close before their full potential for encouraging the broader peace process has been realised.
Ameya Kilara is the South Asia Projects Manager at Conciliation Resources, a peacebuilding NGO supporting people at the heart of conflicts.
Read more from Ameya Kilara