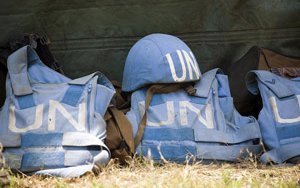 By the end of the 1990s, Canada began to articulate approaches in response to chronic International Humanitarian Law violations against civilians in specific situations. Internationally, Canada long enjoyed a reputation as a “multilateralist, an effective mediator, a diplomat, and a pragmatist with particular expertise in peacekeeping, international criminal justice and human rights.” Former Canadian Prime Minister Lester B. Pearson is widely considered the father of peacekeeping, a great supporter of the UN, and a gifted individual in international diplomacy. Canada's continued reputation as a conciliatory, multilateralist and peace-minded nation is in part due to Pearson’s contribution.

Canada’s foreign policy evolved in history through consistent involvement in peacekeeping and later on was realised through various policies that initiated the Responsibility to Protect (R2P) doctrine and human security. One of Canada’s first humanitarian actions was to sponsor the International Commission on Intervention and State Sovereignty. The scope was to reconcile the “obligations of sovereignty” with the humanitarian imperatives of modern day warfare. The R2P concept introduced a new way that characterised the longstanding desire to minimize the impact of conflict on civilians. Initially, the concept was developed in direct response to the international community’s failings to prevent the genocide in Rwanda and the deliberate targeting of civilians in Kosovo and Srebrenica.

In 2001, the first report was adopted as a UN document. This action shifted the discourse from the “right to intervene” to the “responsibility to protect.” As part of the newly defined concept, states have a responsibility towards preventing conflict whenever possible, then reacting to human rights violations and finally, rebuilding communities torn by war. Its applicability today is necessary in each and every crisis that we witness because the elements of conflict have similar roots and causes.

"Freedom from fear" became the main topic for the Human Security Agenda. This represents an action-based peacebuilding strategy conceptualized by former Canadian Minister of Foreign Affairs, Lloyd Axworthy. Its inclusion into Canadian foreign policy was consistent with the corresponding international obligations and the duty to protect. This concept was supported by effectively engaging UN and its member states as a common goal of reducing human suffering caused by armed conflict. R2P insisted on the duty role of states. It introduced three important changes:

The peacebuilding international action represents the linkage between the human security concept converging with existing international humanitarian law and human rights law agendas as a more comprehensive and reliable strategy for a lasting peace. The benefits include a better applicability of the international humanitarian law, human rights law and refugee compliance, a commitment to the ICC by integrating the Rome Statute into the national laws, addressing impunity by introducing ad hoc tribunals for justice-related processes, improving access for the safety of humanitarian personnel, and addressing the impact of certain conventional armaments. The improvement in the effectiveness of peacekeeping missions came as a result of all these elements working together in harmony.

It is the international community’s interest in having a continual access to peacebuilding resources that is at the heart of humanitarian action. The peacebuilding efforts would be wasted without a complete recognition of the criminal dimension which comes as a consequence of a willful denial of humanitarian access. An early deployment agenda might be the only preventive action available in emerging conflicts when diplomatic negotiations cannot reach the parties involved. Peacekeeping missions remain central in most agenda deliberations with a specific scope of action as the preferred means of protection employed by the UN Council when armed conflict arises. Other peacebuilding themes covered by the R2P concept include refugees, internally displaced persons, disarmament, demobilization, reintegration, rehabilitation, terrorism, housing, land, and property rights of oppressed citizens.

The widespread gaps in fulfilling this R2P agenda remain to be addressed as the main concern expressed by international community is its inability to fulfill all its duties to protect civilians due to lack of humanitarian access and assistance on the ground. In recent civil conflicts gender-based violence seems to be a growing trend which must be prevented at all costs. Consistency in fulfilling the scope of R2P agenda must be upheld by all UN member states.

This agenda must be focused on the good planning and organising of all preventive and protective activities and serving the right of all civilians to be protected from armed conflicts and terrorist attacks. In cases like Sudan, Sri Lanka, and Afghanistan there were “critical gaps between words and deeds” which shows a growing need for practical efforts, access and accountability in implementing the R2P principles. The only way to achieve all these goals is by striving to commit to an increased cooperation between peacekeepers and civilians which must be actively engaged in all conflict situations. National authorities must take an active role when crimes against civilians and humanitarian workers occur as it is their accountability to protect human lives. The latest conflict crises in Ukraine and Syria prove that there is a need for better planning and resourcing of peacekeeping mandates along with an improved training of civilian and military personnel as part of an integrated peacekeeping mission.

The most recent situation in Nigeria proves that there is an increased need for a protection agenda which includes children who face terror during armed conflicts. Also, women need protection when faced with rape, injustice, and violations of many types within their own communities. Peace and security can be achieved when freedom from fear and freedom from want are expressed and applied in all peace activities. The UN Council must remain steadfast in facilitating humanitarian access to these missions and assist civilians without delay.

This is a goal to keep, not only as a promise but a continual commitment to close the gap between rhetoric and application. An action-based peacebuilder is a warrior with a great cause. The responsibility to protect the innocent must be understood and accepted as the most valuable effort to peace and justice. There is a correlation between the two concepts. Hence, there is a great correlation between peacebuilders and the ones who need protection. The rightful claim that Canada is a nation of peacebuilders must inspire others to act as well. There is nothing that can stand against a unified force for peace. The Nigerian girls need to be rescued, Ukrainians need justice and a peaceful future, Syrians needs a change in their political leadership. Freedom from fear and freedom from want is not just a dream. It is our obligation and a necessity that starts with an action towards a more inclusive community of peacemakers.