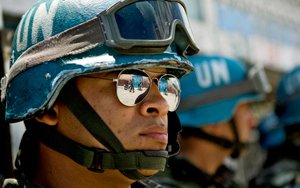 In the last few years civil conflicts in Syria, Iraq, and Ukraine have crippled the notion of peace at national and international level. Before our very eyes we have seen violence leave many citizens without a home, without a family, and in some cases even without entire communities.  These are the latest in a series of long and unending international conflicts. A common ground for rebuilding peace and establishing reconciliation is still to be found.

The international community’s efforts to diffuse the violence seem inefficient and weak. Peacebuilder nations have used all diplomatic means - through both international and their own foreign policies - to effectively control the escalation of conflict.

It is a challenging time we live in and the state of the world causes many to look back at the first peacebuilders that realized their goals by applying the right to protect in a practical way. These are the peacebuilders in action as we know them.

Creating an international community of peacebuilders

It all started with a thriving peacebuilding agenda, a decision made during the 2005 World Summit to endorse former United Nations Secretary General Kofi Annan's proposal to “create a peacebuilding commission, support office and fund.” Along the way, 24 governmental and intergovernmental bodies joined this initiative and became active in supporting peacebuilding efforts all around the globe. It became the largest initiative funded by peacemakers from many nations.

Early on a variety of peace programs focused on an agenda that was dedicated to creating stability and security as part of a peace agreement implementation. Other programs focused on building vibrant civil societies and further development, democracy, justice, and the rule of law. Within the initial framework for action the peacebuilding agenda was adopted and applied as a strategic “external intervention intended to reduce the risk that a state will erupt into or return to war.” Boutros Boutros-Ghali’s original formulation was supported by the UN Secretariat as an “action to identify and support structures which will tend to strengthen and solidify peace in order to avoid relapse into conflict.”  The same techniques that were used to build peace after war could be used to assist societies to avoid war. This was indeed the concept which insisted on a creative solution for conflict prevention and reconciliation by means of diplomatic talks.

Peacebuilding is the only path to conflict prevention in divided societies and the strategy most nations value as part of their agenda for peace.  Post-conflict resolution is a modified peacebuilding term different from conflict prevention. It is a strategy used in the aftermath of a crisis that was neither visible nor foreseen. Although certain situations and conflict resolution strategies could be used in advance by noticing the social, civil or political turmoil in its incipient phase, many times they arise as a consequence of misunderstanding or lack of communication among parties that struggle with power inequality and inability to be effective participants in the local or national governance. A special consideration must be given to elements of positive peace which is defined by tackling the root causes of conflict in such a way that people do not feel the need to turn to violence.

There are growing calls for reform and setting up a mandate where peacebuilding becomes a synonym for conflict prevention. These interchangeable terms are part of the United Nations Development Programme’s mandate. It uses both peacebuilding and conflict prevention by adopting the definition used by Brahimi Report on Peacekeeping Reform. By all means, peacebuilding complements United Nations’ peacemaking and peacekeeping functions. UN member nations have drafted and accepted different terms according with their own foreign affairs agenda throughout the years.

Peacebuilding activities of nations cover many different areas. They include military intervention, social, economic, developmental and humanitarian efforts, political and diplomatic intervention, and justice. International bodies such as UNDP, the World Bank, and IMF also play a role.

Many peacebuilding programs aim to create a liberal state with respect for human rights and the protection of the rule of law. This model is constrained by representative institutions and by vigilant media. The liberal democratic state is known for holding periodic elections and protecting markets, a very westernized model that has been largely accepted as the most functional political form of democracy in the world.

However, lately, this “liberal model” has been criticised since it might not promote a comprehensive peace. Many consider that such model is based on western hegemony and does little to eliminate the root causes for conflict. It in fact allows the conditions for conflict to arise. The critique is that such model is absent of trust, security, and stable institutions, and is too competitive. This discourse creates a controversy about the viability of peacebuilding programs.

Could this be the reason for conflicts and crises that exist in nations like Syria, Iraq, as well as between Russia and Ukraine? Perhaps we should look at the origins of these conflicts to see if competitive structures and institution are the root causes. Certainly, what is mostly desired is a state that can make credible commitments and deliver on those commitments in a reasonably efficient and impartial manner using rational and legal means.  Coercion must only be used as a last resort in instances when local talks and negotiations efforts are unable to bring parties together for reconciliation.

Peacebuilding must be understood as the foundation of a statebuilding. It is essential to build a functional and a capable state where all local governmental, non-governmental, and independent actors are committed to a successful peacebuilding plan. The controversy of agendas versus action must be eliminated in order to gain credibility and allow a transparent course of action to take place.  A stable and secure peace is achieved when states will not return to war years after a peace agreement is implemented. When the centralization of power is dispersed and equally distributed among local agents without leaving in place an authoritarian governance structure the peacebuilding mechanism will succeed.

What is the first step that a state should take in aligning its agenda and commitment to become a peacebuilder in all its endeavors? Can a state do this all alone or is there a need for a collective international collaboration in such manner that all elements of peacebuilding are consistently achieved?  When the international peace and security is threatened, collective intervention is the accepted norm that is at the basis of all decided actions during humanitarian crises.

Most recently, we have seen new humanitarian crises in Syria and Ukraine and a lack of coordination of efforts to stop the violence. It seems that a theoretical peacebuilding strategy does not always give the best results on the ground.  “There is a growing acceptance that while sovereign governments have the primary responsibility to protect their own citizens from such catastrophes, when they are unable or unwilling to do so that responsibility should be taken up by the wider international community – with it spanning a continuum involving prevention, response to violence, if necessary, building shattered societies.” [1]

Protection of human rights of a population whose government commits genocide and crimes against humanity is a matter of higher international law applicability.  A collective intervention should substitute the unilateral intervention of a state in such cases under the authority of the UN Security Council and NATO in recent events.

There are different views when it comes to the right to intervene. Article 2(4) of the Charter prohibits “the threat and use of force against the territorial integrity and independence of any state” which represents both a political and a moral statement that recognises that aggression will never be acceptable for humanitarian interventions and its purpose. Authoritarian regimes often use it as their first premise and argument in cases of civil conflict.  If this is the case then all conflicts must be ignored by the international community and left unattended.

It goes back to early 1800s intervention in Greece during the pre-charter doctrine of St. Thomas Aquinas, Grotius and Emanuel Kant along with other scholars who collectively spoke against the unilateral action of one regime against its own citizens.  Throughout the history, the legality of humanitarian intervention has won many writers and scholars’ attention especially after WWI with only a few rejecting this doctrine.

Mandelstam [2] clearly states that “the victory of the principle of humanitarian intervention over the rigid dogma of non-intervention” compels nations to take an active role in protecting not only its own citizens but the citizens of other nations. “The justifiable use of force for the purpose of protecting the inhabitants of another State from treatment so arbitrary and persistently abusive as to exceed the limits within which the sovereign in presumed to act with reason and justice.”[3]

This is a solid ground on which nation states must recognize that such justifiable intervention is part of the new era where “the right of humanitarian intervention in the name of the Rights of Man trampled upon by a State in the manner offensive to the meaning of humanity. It has been recognized long ago as an integral part of the Law of Nations.”[4]  The purpose of an intervening state is not to become a dominant force within another territory. It is the specific and humanitarian effort to reduce violence and protect innocent civilians at all costs. A nation state that adheres to the right to protect is a peacebuilding and a peacekeeping nation in all its endeavours.  It is a confident, trusted, and creative force that leads the way in its purpose to build a democratic platform of renewed peace and hope among shattered dreams and divided communities.