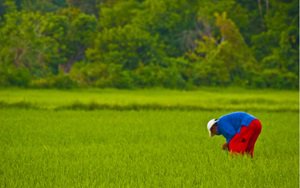 The production of rice in the Philippines has been dramatically affected by weather phenomenon El Niño. Image credit: Shan Seehan

North Cotabato in Mindanao, southern Philippines, has been experiencing a devastating drought for six months now, due to the effects of El Niño. This weather phenomenon is affecting 36,000 people and the local government has declared a state of calamity in seven towns and one city in North Cotabato.

On 30 March, 2016, 6,000 peasants and indigenous people, as well as members of cause-oriented groups, first gathered in front of the National Food Authority (NFA) warehouse blocking the Davao-Cotabato highway in Kidapawan City in Cotabato, Mindanao. They organised protest action, asking the government to provide emergency support for the hunger experienced due to effects of El Niño on their agricultural production.

The local government, to which the national government has devolved budget and resource allocation, promised three kilos of rice to each family every four months. The protesters refused the measly offer and were angry at the delayed release of food relief and calamity funds. They demanded a subsidy of 15,000 sacks of rice from the National Food Authority, free distribution of seedlings, an increase in crop prices, and the removal of military forces from their communities.

On the morning of Friday 2 April, 2016, a police officer gave an ultimatum to the protesters, the latter expressing they would rather talk to the governor who was supposed to hold a second round of talks with them.

Pedro Arnado, chairman of the Kilusang Magbubukid ng Pilipinas (Philippine Peasant Movement), Cotabato chapter said: "All we wanted was relief from the drought, especially the rice, and we would peacefully leave but the chief of police insisted that they would disperse us by force if we did not leave."

The protests: what happened

When the protest line was broken and mayhem ensued, protesters fought back with whatever they could grab, such as stones and sticks. Police fired M1 rifles at them. At least two protesters were killed by the state forces, 116 were injured and 87 protesters were missing. Two police officers with head trauma are in a critical condition and the security forces detained about 78 protesters.

Fearing for their safety and lives, many protesters sought refuge at the local Spottswood Methodist Mission Center, which was surrounded by the state forces. Reporters were barred from entering the church grounds. The church provided sanctuary to the fleeing protesters and served as an evacuation center, to which the state forces laid siege.

As the permit to demonstrate expired Friday morning, the police and the provincial governor justified the violent dispersal in the name of public interest. Provincial Governor Emmylou Mendoza defended the attack on unarmed, hungry people as a “clearing operation” as the permit to assemble expired.

On the morning of Saturday 2 April, 2016, a search warrant was served to church leaders by the police. No weapons were found in the church. Governor Mendoza threatened to sue United Methodist Church Bishop Ciriaco Francisco, writing that harbouring protesters “is punishable by law.” As the majority of the Filipinos are Christian, when the Church sides with the poor and the oppressed, this sends a clear signal that the protesters stand on high moral ground and that the government must favourably respond to their demands.

Many civil society organisations, church groups and politicians were shocked at the violence of the dispersal and government defence of the brutal dispersal. For example, in the aftermath of the bloodbath, the Department of Interior and Local Government bestowed medals upon policemen who were involved which many in civil society slammed.

The National Union of Journalists of the Philippines (NUJP) also condemned “police intimidation and attempts to suppress information” by preventing media practitioners from covering the violent dispersal in Kidapawan, during which many journalists were harassed physically.

Similarly, religious institutions came out in support of the protesters. Iglesia Filipina Independiente (IFI) Bishop Rhee Timbang of Surigao Diocese said: "This is too much an abuse and oppression against our farmers who toil for our foods." President of the Catholic Bishops Conference of the Philippines, Archbishop Socrates Villegas, said: "May the police and military return to their mandate to preserve peace, protect the weak and serve justice."

The General Board of Church and Society of The United Methodist Church (GBCS-TUMC) extended its support for Bishop Ciriaco Francisco of the Davao Episcopal Area and the farmers. A number of other religious institutions called for donations to support those suffering, condemned the violence and stood in solidarity with those protesting.

Perhaps most prominently, New York based Human Rights Watch said: “The government needs to urgently investigate the incident, particularly the conduct of law enforcement personnel that may have led to the bloodshed, and hold accountable anyone found responsible regardless of rank or affiliation.”

The political response: a violation of rights

Whilst the Philippine government came under fire for the violent dispersal, those speaking on behalf of the Malacañang Presidential Palace were defensive, calling for people not to "rush into judgment," and claiming that the issue is highlighted to affect the results of the presidential elections. If the government admits culpability, the Aquino administration and Liberal Party’s bet for the Presidential race, Mar Roxas, will continue to drop in ratings.

In response to this, Presidential candidate Senator Grace Poe said the protesters were making a rightful demand for government assistance in times of drought. She called for an immediate investigation of the bloody dispersal. Other candidates upheld the Filipino right to free assembly, condemned the use of bullets to disperse protesters and called for a thorough investigation into the security forces who fired at the crowd.

Similarly, Vice Presidential candidate Senator Ferdinand Marcos, Jr. stood against the use of bullets to disperse protesters. Marcos said: "I deplore the use of bullets to answer legitimate demands of our farmers and their families in North Cotabato. They are hungry and they are just asking for food so they can feed their families. The violent dispersal was completely unnecessary."

The legal response has so far focused on the violation of the rights of the protesters. The regional director of the Commission on Human Rights said that the police who fired shots at farmers who were on their knees had clearly violated human rights. Correspondingly, the National Union of Peoples’ Lawyers and its affiliate, the Union of Peoples’ Lawyers in Mindanao will file charges against Governor Emmylou Taliño-Mendoza, police Supt. Alex Tagum and others responsible for the violence and killing.

The aftermath: what effects for local peace?

The violent dispersal of the peasants and indigenous peoples is a step backwards in the peacebuilding process
The Commission on Human Rights, the Senate, the Philippine National Police, and many civil society organisations are conducting separate probes into the violent dispersal.

And in Metro Manila, social movements staged a mass demonstration in from of the Department of Agriculture to protest. Many other rallies ensued in front of the headquarters of the Philippine National Police and elsewhere.

The violent dispersal of the peasants and indigenous peoples is a step backwards in the peacebuilding process. Mindanao is beset with many problems which led to the formation, development and rise of several Mindanao-based rebel groups, including the Moro National Liberation Front (MNLF), the Moro Islamic Liberation Front (MILF), and their splinter groups. In addition, the nationwide underground revolutionary groups, such as the National Democratic Front and the Communist Party of the Philippines have a strong presence in Mindanao. The national government and local government must own up to the violent dispersal, hurting of protesters and killings in order for the peacebuilding efforts to move one step forward again.

In Mindanao, the hungry and suffering people cry for rice, not bullets.