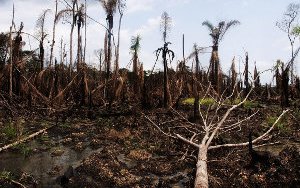 Image credit: Sosialistisk Ungdom (SU)
At its core, what one would consider to be an act of violence under conventional thinking remains predominantly human-centered.
The Conference of the Parties in Paris comes at a pivotal point in our history.  It is of vital importance for member states to address the on-going realities of the 21st century with revisionist eyes, for several important gaps exist with regards to policy design and delivery.

One such gap is the idea of violence within the overall scope of climate change discourse, which for many years has hindered positive change on a number of different policy outputs. This article will put emphasis on how conventional views of violence have trumped the development of environmental protection mechanisms.

At its core, what one would consider to be an act of violence under conventional thinking remains predominantly human-centered. In other words, acts of violence are encased in such a category on the basic premise that what is considered a violent act is premeditated and initiated by, and directed toward, humans. Even though there may be discrepancies over what is considered to be ‘violent’, the debate is nevertheless rooted on the basis of human-centricity, which subsequently permeates into the realms of policy-making and practice. The field of conflict resolution is thus formulated to understand why violence is initiated and how said violence can be converted into a peaceful discourse.

Domestic and international legal mechanisms and institutions have been created to regulate humans’ ability to engage in violence, either via preventative, punitive or restorative means. Two examples worth noting are the establishment of the International Criminal Court and the International Court of Justice. These institutions are further complemented by the possibility of creating ad hoc criminal courts and tribunals such as the International Criminal Tribunals for the Former Yugoslavia and Rwanda. Investigative and prosecutorial powers are therefore conferred on these entities with the objective of enshrining human integrity and dignity as the ultimate paramount of existence.

Violence that results in the loss of human life and/or the deterioration of its integrity remains punishable by way of our conventional punitive instruments insofar as the recipients of said aggression are humans. However, a series of challenges arise when human-centricity dominates the design of said instruments, and the overall discourse on violence.

First, by providing a predominantly human-centered approach to aggression, one inadvertently fails to acknowledge the omnipresence of extra-human variables in the creation and proper functioning of human-made systems. Consumer-oriented societies have developed in such a way that a detachment has occurred between what a consumer expects to purchase in the marketplace and a product’s processes of extraction, production, packaging, transportation and disposal.

Any international policy designed under the aegis of our current human-centered approach to violence will be limited in scope
In these processes, natural resources play an essential role in ensuring that the lifeline of any given product is thoroughly completed, replicated and sustained. When a situation arises where violence is practiced on the environment, the process of making a product available for consumers becomes obstructed, an issue that may transcend the environmental spectrum and carry additional consequences of economic and social nature.

Second, and in line with the previous observation, human-centered conceptions of violence hamper economic and social development by refusing to recognize human responsibility when violence has been exerted on elements in the environment. While punitive instruments already exist in cases of property damage, they are primarily remunerative in nature.

These systems of compensation are designed with the explicit objective of providing reparations by assigning a monetary value to the loss or damage of a specific resource. Human-centricity is ever present in these systems in that property owners are the recipients of compensation, which may not necessarily translate into environmental damage being reversed and further restored to a healthsome enough level that will allow for the support and sustenance of economic and social infrastructures. Compensation in this context remains focused on the proprietor of a resource, and not on the resource itself.

And third, it contributes to the creation of a policy agenda that severely limits eligibility criteria for the protection of non-human elements in our planet. In the previous example, compensation for the loss or damage of property was conceived as a grievance alleviation mechanism. While humans are eligible for compensation in the case of a breach in property law, the property itself does not fall under the same category.

This has tremendous repercussions for the conception of international instruments for the protection and/or preservation of soil, water and more complex ecosystems. Therefore, conceptualizing violence through a conventional human centered perpetrator-victim paradigm imposes serious limitations to the way one conceives and designs protective international instruments.

In closing, it is important to continue to stress the already well-known values of climate change adaptation and resilience-based policies, but it is equally as important to recognise that any international policy designed under the aegis of our current human-centered approach to violence will be limited in scope, and most likely will remain insufficient to deliver significant climate targets.