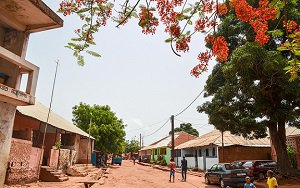 However, there is hope for the future, with major international donors committing more than a billion euros in funding after the holding of successful elections last year - and as the work of our new Local Correspondent Tomas Serna demonstrates, there are excellent groups working to address national issues with a local perspective.

Tomas has so far researched profiles of ten local peacebuilding organisations in Guinea-Bissau. They include Voz di Paz, which works with a network of community radio stations, the Forum dos Regulos, which harnesses the strength and legitimacy of traditional dispute resolution methods, and Casa Dos Dereitos, a human rights organisation based in a former prison which brings together different civil society organisations.

In addition to the international NGOs and the EU’s IcSP-funded projects in Guinea-Bissau, this means there is a wide range of peacebuilding work taking place in Guinea-Bissau. We look forward to expanding our coverage of it.