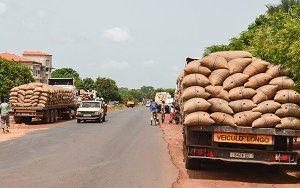 Guinea Bissau is extremely poor and relies heavily on harvesting cashew nuts and other crops. Image credit: jbdodane.
The military has never been fully separated from politics, and continues to have an impact on political life
Is it almost impossible to understand conflict in Guinea Bissau without looking at its history and war of independence.

The country gained independence from colonial rule after eleven years of struggle. The liberation war began in 1961 led by Amilcar Cabral, an agricultural engineer and a nationalist writer and thinker that became one of Africa's foremost anti-colonial leaders. The army almost inevitably became a key institution in the wake of this. It had brought freedom to the country and embodied national pride.

Following a coup in 1980, Guinea-Bissau developed a one-party system in which the military had an active role in politics. Nino Vieira introduced in 1994 a multiparty system. The new constitution contained provisions for the immediate separation of the army and politics. But the process of democratisation was badly handled, and the army never properly demobilised. Consequently, the military has never been fully separated from politics, and it continues to have an impact on political life.

This failure contributed to the outbreak of a politico-military conflict in 1998. The controversial monetary union with the CFA zone and alleged arms trafficking involving the Army and the Casamance rebellion in Southern Senegal contributed as well. The short but devastating conflict divided the army between followers of President Nino Vieira and the Junta Militar headed by Brigadeiro Ansumane Mane.

Politics, policy and power: the quest for personal riches

With the end of the war and the victory of the Junta, political instability became structural, made poverty more acute and encouraged illicit activities including drug trafficking and international crime. The root causes of the war were never dealt with, and a political culture of patronage and corruption developed.

During the 2000s political elites used state institutions to advance their personal interests, political power became a privileged source of income, and political struggle turned into competition for control of resources.

In this context, participation in political power games, the redistribution of resources, and the desire to address political disorder were all claimed as justification for intervention and coups d’état. From 1999 to 2012, Guinea-Bissau suffered no fewer than seven coups.

A new generation, a new hope?

In the land of Amilcar Cabral, one of the heroes of African independence fighters, leaders worthy of the name have become scarce. In order to rejuvenate politics, the new generation of political leaders must introduce accountability, transparency and develop the rule of law.

One of the key issues they must address is the question of the military. Efforts to bring about lasting reform of the defense and security sector have made little impact on civil-military relations. If the value of the history of the independence struggle and the collective national memory are well measured, demobilisation of the heroes of the war - the ‘combatientes da liberdade da patria’ - cannot be simply considered as a question of negotiating an economic retirement package.

A new leadership model is developing within the Guinea Bissau civil society organisations. This model favors organisations with more horizontal decision making, more accountable and more specialised. This trend has been attributed to the consequences of the economic crisis of 2008, the decrease of financial partners and the scarcity of funding. The bad reputation of the country is also well encouraging civil society organisations to streamline their value added. The long-established big NGOs, less focused, more vertical and unaccustomed to facing tough demands may stagnate. At the same time, much more dynamic leaders are growing in new organisations. This new generation offers hope.

In the new setting these new organisations have an important role to play. State building needs civil society contributions to enhance citizenship, the rule of law, and to increase awareness of non-violent issues to manage societal conflict. Guinea Bissau peace builders have the faculty to contribute to developing these values, including accountability and transparency. They can contribute to temper the gap between civil society and the military and some of them could play an intermediary role between parties in conflict. As a final point Guinea Bissau peace builders are called to support the social integration of the demobilised combatentes da libertade da patria and to use the collective national memory to rebuild a reconciled Guinea Bissau.