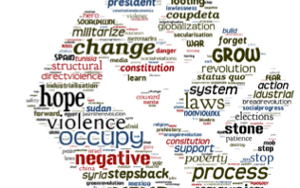 It has been five years since the 2008 Mumbai bombings flared tensions between India and Pakistan; four years since that first tweet went out in the Iranian 2009 “Green (Twitter) Revolution” three years since the world shook in despair at the mass destruction and human suffering in the 2010 Haitian Earthquake, two years since the first cries for democracy and equality were tweeted out in the “Arab (Spring) Uprising” began; and one year since the Occupy movement occupied the world’s curiosity but failed to get its full support. These events were unprecedented… all thanks to the potent combination of human determination, democratized communications platforms and an ever-enclosing digital divide.

Even with many vocal academics and on the ground activists contesting the central role new media and digital technologies have had played in these events, it is undeniable that they have transformed the way we connect, organize and have an impact on our world. Still many agree with Egyptian activist Hossam El-Hamalawy, said in 2008, “The Internet is only a medium and a tool by which we can support our ‘off-line’ activities,” he said. “Our strength will always stem from the fact that we’ll have one foot in the cyberspace, and, more importantly, the other foot will be on the ground.”

It can also be said that the new tools of communications allow messages to be amplified and communication flows to become increasingly horizontal and democratizing. In addition, the huge amounts of shared open-source data and consistent interactions between participants has transformed seemingly disconnected peoples into a community.

These new media and digital technologies have also positively contributed to better and more organized humanitarian responses. For example, in Haiti, where within hours of the earthquake extensive visualizations and data maps were created to assist in saving lives and reconstruction. Activists have been equipped to organize and coordinate protest efforts in Egypt, Tunisia, and Occupy. In addition an important by-product of these new interactions have been the way in which the international community can act as human rights monitors via data posted onto YouTube and other social media platforms.

One substantive effect new technology has had is in a deeper participatory approach to media’s work in conflict contexts. Now the audience of a peace movement is global. Social change and peace movements/campaigns, once considered the dangerous work of local grassroots indigenous activists and civil society, have now transformed into “global crowdfunded-change your Twitter avatar-update your Facebook status-like my page” campaigns. It may be true that the future calls for engaging participants through online, offline and hybrid experiences and perhaps it will be the normative mode in which communication takes place.

And even if there has been a great shift from a rigid top-down hierarchical approach to social change, it has increasingly been characterized by a reliance on mobile, inclusive, and interactive tools. It is now where a wealth of information gathered from locals and those outside the traditional development, humanitarian and peacebuilding communities share information and mobilize for action.

But is this authentic? Should the peace movement be tweeted? Should it be re-tweeted? Can peace start as a Facebook status and go viral? Can peace be achieved the same way social change has thru the use of new media and digital technologies? First let us see what social change actually is and how it has actually laid the groundwork for peace to take place.

What is Social Change?

The phrase “social change” refers to a progression in society, a paradigm shift forever changing the dynamics of a society and culture. It is a disruption in the current status quo. Social change is usually highly disruptive to a society as it tears apart the structures holding it together.

What does social change, change?

However painful, social change is extremely powerful as it usually addresses societal inequalities, repression and power inequality, which often lead to cultural, structural, and/or direct violence. Direct violence is conflict in the form of physical harm. Structural violence is the disabilities, disparities and even deaths that result when systems, institutions, or policies meet some people’s need at the expense of others.

The revolutions of the last few years, have been augmented by new media and digital technologies, addressing each type of violence explained above and yet many citizens in of the countries where revolutions have taken place will deny that peace, security or stability have followed.

Of course social change takes time and without it peace can never come. Without peacemaking it is impossible to deliberately bring people together who have different interpretations of their common past, groups with different experiences and instead of coercing one group to accept the narrative or interpretation of the other, trying to find ways to create new relationships and develop understandings of the interdependence that shapes them and the future they may share.

For peace to stick it has to come from within a society after there has been an awakening. Peace is the internal “dynamic understanding that conflict can move in destructive or constructive directions, but proposes an effort to maximize the achievement of constructive, mutually beneficial processes and outcomes.”

Peacebuilder and peace researcher Lisa Schirch defines peacebuilding as an intervention that “seeks to prevent, reduce, transform, and help people recover from violence in all forms, even structural violence that has not yet led to massive civil unrest. At the same time it empowers conflict actors to foster relationships at all levels that sustain them and their environments.” It is creating not only an environment that sustains peace but also a culture that promotes peace; it is an action that supports structures, which strengthen peace so that destructive violence will be avoided.

In Part 2 we will look at how Media is used as a weapon of war thru hate media, systematic repressive media censorship and regulations, temporary and intentional Internet blackouts and state sponsored propaganda. 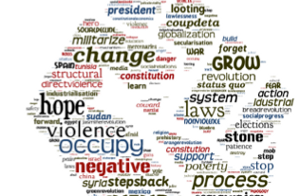