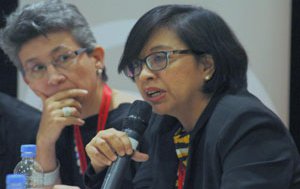 Insight on Conflict recently had the opportunity to speak with Professor Miriam Coronel-Ferrer, Chair of the Philippines Government Peace Panel with talks with the Moro Islamic Liberation Front. In the interview that follows, Professor Coronel-Ferrer discusses women's participation in peace talks, the role of civil society, and the future of the peace talks in the Philippines.

This interview was conducted in partnership with Conciliation Resources.

I belonged to the department of political science in the University of the Philippines but I’ve always been involved in peace, human rights, disarmament and advocacy.

Have you always been focused on gender and women’s rights or is this something new?

This has always been a dimension, either as part of the resistance to the dictatorship, but in any organisation you join gender issues will always crop up and over the years while we’ve concentrated on peace we’ve found that reaching out to women’s peace groups provides a better chance for peace talks to have a feminine grounding and advocacy. You don’t get all these issues in the same frame work and the conditions of the society that you wish to change.

There is often some criticism that women have not earned their role when they are involved in high level peace negotiations. Is this justified?

Sometimes you can have the right step in the beginning, it usually begins with a token women but that’s part of how spaces are being opened up to women. Hopefully this opens up minds and awareness. It’s certainly not enough and any woman who gets into a position would have to be responsible for other women. There would be concerns that would be brought to her simply because she’s a woman. I’ve experienced that with women who have told me their stories and specific concerns they have and they say they can do this because I am a woman. It would be hard for an ordinary woman to walk up to a male official and tell them their concerns. It becomes a responsibility.

Peace Direct looks at local peacebuilding, what role do you think this has in peace agreements, both in the Philippines and in the wider world?

Well we need to do the work at all levels and there is much work to do; with different components and aspects that cannot all be covered by one group. Much is expected of the government and they cannot do the job by themselves. The government needs the support, the push and the input from local peacebuilders and civil society actors like modern NGOS, or even traditional community groups that have banded together and have a natural or organic network. All of these peacebuilders are very important actors on the ground. If all of them are involved with the reform agendas then the aspirations of the peace negotiations will have a better outcome. What obstacles do you think are in the way of local peacebuilders?

A lot and especially in countries where the political conditions are not democratic. In the Philippines it’s actually a constitutional mandate that we involve civil society actors at the top level. But the constitution itself is the product of the work of civil society and it was part of that effort and the push to change the government that worked. But you don’t find that in all the countries, even if you do find constitutional guarantees you find societal barriers to effective participation. For example, elections remain very violent in The Philippines and involvement by local peacebuilders in elections can be a matter of life or death and not because of organised state repression, but with the context of too many armed groups. This is also combined with the failure of the state to punish powerful individuals and families who can create destabilisation and violence. There has to be a lot of interface, urban/rural, centre/ periphery and they all have to have a good working relationship to carry society forward to lasting peace.

British media, as a whole, does not report on the Philippines conflict, and one part of Peace Direct is to broadcast areas of conflict and the work that is done there. Do you feel like this helps or hinders peacebuilding in the Philippines?

There are flavours of the month and The Philippines does have its moments when it’s reported, for example Hurricane Haiyan, where we received a lot of aid from both the UK government and the UK population. The kind of international support we get is part of the conflict we operate in. At the global summit we’re happy to be represented and have a chance to tell our case.

What’s the next step for the peace talks between The Philippine government and the Moro Islamic Liberation Front?

You have no choice to try your best or society is stuck in this situation of no change. With all the best intentions everything might turn out well. But you don’t stop just because you’re unsure that everything might succeed. We’re really trying to get something foundational on the ground.