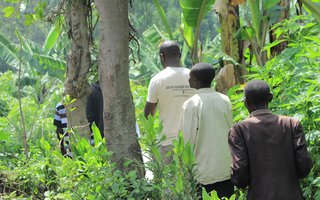 Rumours and false alarms can spread through both urban and rural areas by word of mouth, via text messages, and on social media.

This is a significant problem in places like the North Kivu Province in the Democratic Republic of the Congo (DRC), where false and unverified information contributes to intercommunal tensions and has the potential to trigger deadly violence.

While many of these rumours arise naturally as people try to make sense of uncertain situations with limited information, there are also those who deliberately use tools like social media to spread false information and manipulate or deceive communities.

This potential for false information to exacerbate conflict is why the Sentinel Project’s Kijiji Cha Amani initiative in DRC operates with the motto “peace begins with the truth.” Since 2017, I have used my experience as a peacebuilder and human rights defender in the Great Lakes Region to lead Kijiji Cha Amani (Swahili for “Peace Village”) with the aim of ensuring that local residents have access to a reliable, trustworthy source of accurate information. Together with my colleagues and a network of volunteers, I am working to address the problem of rumours and misinformation, which is a challenging task in a region subjected to intercommunal conflict, terrorist attacks, and the activities of numerous armed groups fighting against both each other and the Congolese government.

This potential for false information to exacerbate conflict is why the Sentinel Project’s Kijiji Cha Amani initiative in DRC operates with the motto “peace begins with the truth.”

We dream of having peaceful communities in DRC where everyone has the freedom to express themselves and to know the truth, which would help to de-escalate the cycle of conflict and violence. Kijiji Cha Amani is helping our communities to reach that point by providing an interactive mobile phone-based information system for members of the public to report rumours, which our team then investigates before sending the verified facts back to the community. This approach was based upon the successful Una Hakika project, which did the same thing in Kenya before being replicated in other countries. We have found that using various communications channels such as SMS, WhatsApp, and social media alongside a network of trained volunteers called community ambassadors is the best approach for maximising accessibility and interactivity. This is important when working with communities that have varying economic assets, technological resources, and literacy levels.

We dream of having peaceful communities in DRC where everyone has the freedom to express themselves and to know the truth, which would help to de-escalate the cycle of conflict and violence

We see many examples on a daily basis of different types of rumours and misinformation that can push people towards violence and it is important to understand some of the nuances and dynamics involved here. Misinformation refers to false information in general. When we talk about rumours we are referring to unverified hearsay of unknown origin that may turn out to be either true or false. Rumours tend to be shared innocently and without certainty of the truth but they can still cause serious problems if they concern incendiary topics, such as those related to hostility between tribes. Unlike rumours, disinformation is a type of misinformation that someone has deliberately created in order to achieve a goal, which can range from making money by driving online engagement to manipulating populations to engage in violence. This kind of harmful content has long circulated in relation to politics but in recent years it has also spread to other topics such as Ebola outbreaks and the COVID-19 pandemic.

Communications technology is an important tool because of how it enables a very large number of people to access information on almost any topic while also creating their own content to inform others. However, this situation also presents great risks since many people use technology to share unverified information which can reach a very large audience and spread out of control. When rumours concern alarming or inflammatory topics, such as killings of civilians by armed groups or imminent attacks by rival communities, they can take on a life of their own. This often further destabilises precarious situations and inspires more speculation in a dangerous spiral.

Kijiji Cha Amani aims to break the cycle of rumours and violence in North Kivu by providing members of the public with access to reliable information in response to their own self-identified needs. While filling in this information gap on a day-to-day basis, the project also aims to facilitate positive changes in attitudes and behaviours by encouraging people to be more critically minded and to question the things that they hear before acting upon them. As our team now works to expand Kijiji Cha Amani into new areas and to recruit thousands of new subscribers, we are confident that these efforts will help to bring peace to more people in North Kivu while also helping them to better navigate dangerous situations that do arise.

A further exploration on the theme of digital technologies and peacebuilding can be found in ‘Pathways for Peace,’ a report by Peace Direct.

James Kataliko James Kataliko, is Project Leader of Kijiji Cha Amani and The Sentinel Project in DR Congo.
Read more from James Kataliko
Disclaimer: The views expressed in this article are those of the author and do not represent the views or position of Peace Direct.