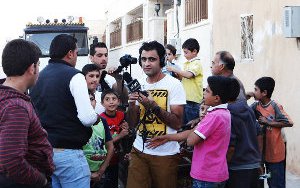 Many people have lost interest in the war in Syria, thinking there are hardly any ‘good guys’ to feel sorry for. Since a popular uprising erupted in March 2011, the first months of coverage were still characterised by an optimistic expectation, fuelled by similar experiences of popular revolts in other Arab countries. While the war has been dragging on, the attention for what the war means for ordinary citizens seems to have diminished.

Western attention towards Syria now mainly evolves around the abstract political game surrounding the many (international) parties to the conflict: the suspected use of chemical weapons, the implications of the ‘red line’ posed by the United States and its willingness to intervene militarily, the perceived success of the international chemical disarmament program, issues of international support through weapons deliveries to groups fighting on the ground, the expectations and subsequent failure of Geneva II, etc.

An additional problem about understanding Syria is the general the lack of information about what is going on inside Syria. First-hand accounts on what is happening in Syria are very scarce and do not seem to contribute to a better understanding of the dynamic on the ground. The deteriorating security situation affects the number of journalists able and willing to enter the country.

In a recent article in The World Today, war correspondent Anthony Loyd painted the grim situation that journalists in Syria face, and the deliberate targeting of journalists with abduction and killings has resulted in large swaths of Syria being completely uncovered by independent journalists. This leaves us with very limited possibilities to get the voices and messages from Syrian civilians across. PAX, together with international and Syrian partners, is working in Syria through the Social Contract Project, which aims at improving local governance and service delivery by local councils that have sprung up in the ’liberated’ areas, in cooperation with a developing civil society movement and in consultation with local military leadership.

As a result of the increasing violence and insecurity in most parts of Syria, PAX staff, as well as many other NGOs, are not able to conduct meetings, trainings and workshops inside Syria, but are forced to invite Syrian local key partners to cities just over the border in Turkey, Lebanon and Jordan. The local council members and civil society activists who wish to participate in the project activities, still face considerable dangers on their journeys across borders and back into Syria, in the absence of any official customs processes on the Syrian side.

These meetings in neighbouring countries however, allow for direct communication with ordinary Syrians, where they can speak out and share experiences and views with outsiders about what is happening in their hometowns. Normally, they are ‘trapped’ in their towns and villages in the middle of contested territory, cut off from communication lines as electricity is mostly limited to a few hours a day, while internet access and mobile phone coverage are problematic or non-existent at all.

Last week, during one such a meeting with representatives from local councils and civil society organizations from the town of Saraqeb in Northern Syria, a civil society activist running a radio station, explained to me how important it was to provide news and information to the citizens of Saraqeb:

We inform them about governance and the local council, what is happening in the town. We have to rebuild trust between the citizens and the authorities. For example, the local council decided to levy an additional tax on bread, which angered the population, who already experienced great difficulty in affording the old price. We made a story about this, interviewed people on the street, bakers, and members of the council. It proved that the council needed this money badly to pay for the diesel on which the bakeries depended for baking their bread. The continuation and stable provision of bread therefore necessitated this extra fee. This created more understanding with the population.

The above-mentioned radio station proved to be the main source of information for citizens about the work of their local government council. As the council has not been elected, but formed in an unstable time due to war violence, debates about the legitimacy of the council took place mainly through these local media:

The majority of the population wants an election. The council says they do not have a mechanism to hold elections.

He learned how delicate the balance is between an informed and uninformed citizenry.

There is a general lack of information among the citizens of what is going on in the town. There are social projects in Saraqeb, while nobody really seems to know what the projects are about, who is the donor, and who it will benefit. But they know a lot of money is involved. This can lead to unrest and conflict, so that’s why we try to inform them about the project, so this will stop rumours.

The consequences of rumours, speculation and gossip interfering and interrupting with information provision could be that this undermines the social cohesion between different segments of the local community (be they ethnic, religious, or socio-economic) and could create more conflict potential inside the community in addition to the already raging conflict surrounding the town or village. This would put even more pressure on its citizens, create more anxiety and insecurity and makes efforts towards reconstruction harder to realize.

In addition to serious news coverage and allowing space for citizens to speak up and raise their voices, the radio station also offers a wide variety of programs, each of them covering basic needs of a population in distress. In the midst of insecurity, fear and loss, people get the opportunity to remember loved ones and evoke memories of how life used to be. In other programs, people are allowed to express their love for each other, or people can forget daily worries through entertainment and sarcastic humour. Media in war zones are able to lift the spirits of its audience, maintain human dignity and pretend life is just ordinary, even when its not.

Access to solid information can save lives, but indirectly helps people to come to terms with their own situation, and to take responsibility for their own lives and communities.
If done strategically and responsibly, providing objective information to communities enables people to devote their energy to constructive action based on a solid consideration of options. Solid information can give people a sense of which places to go or to avoid, it can help them prepare for what is coming and serve as an early warning system. Transparency prevents rumors, speculation, reduces feelings of insecurity, and helps to promote mutual trust among different segments within a community towards an inclusive social cohesion.

Civilian communities in Syria are hugely dependent on information provision in the midst of daily insecurity, fear and danger. Access to solid information can save lives, but indirectly helps people to come to terms with their own situation, and to take responsibility for their own lives and communities.

Access to information and independent media is essential for everyone, in getting to know what happens in Syria or other places in the world, but also in allowing Syrians to be able to express themselves and share their stores and experiences with the world around them. When we are willing to listen to what they have to tell us, we will acknowledge that there are still peaceful civilians who deserve our attention, sympathy and support.

Anton Quist is Programme officer Human Security for PAX. PAX is a Dutch peace organization, PAX brings together people who have the courage to stand for peace.
Read more from Anton Quist 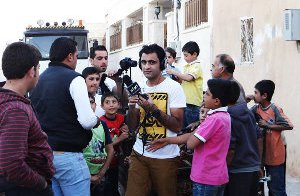