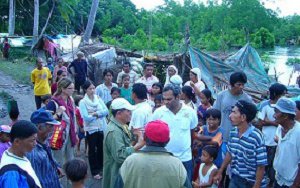 The UN High Commissioner for Refugees (UNHCR) defines internal displacement as the movement of individuals seeking sanctuary within the confines of their own home countries.

The worldwide population of IDPs is estimated to be 33.3 million
Because of natural disasters and armed conflict, the global number of internally displaced persons (IDPs) has been increasing. As of the end of 2013, the UNHCR estimated the worldwide population of IDPs to be 33.3 million. These people are unique to migration studies in that – unlike refugees who cross state borders to seek safety – IDPs remain under the nominal legal protection of their own government. This is crucial, in light of the fact that governments sometimes cause their flight in the first place.

The Philippines in context: under-development and independence movements

In South Asia in particular, there were an estimated 3.2 million IDPs by the end of 2013. Their displacement tends to be caused by conflict between governments and religious, ethnic, or clan-affiliated non-state rebel groups. They are often competing for political power, resources, land, and economic opportunity.

The conflict in the southern portion of the Philippines – where some groups have been struggling for autonomy for the past 30 years – is the catalyst for much of the displacement in the archipelago. General under-development in the region, and an unequal distribution of wealth, have helped fuel the fighting. In September 2013, Human Rights Watch reported that militants had attacked Zamboanga, a mostly Christian city in the south. The resulting encounter between the militants and government forces resulted in 120,000 people, mostly Muslims, to be displaced.

At least 71,800 people were newly displaced in the Philippines during 2014. As in previous years, they were largely concentrated in Mindanao and the Autonomous Region of Muslim Mindanao. In late 2014, many of these IDPs remained in evacuation camps, and by March of this year, armed clashes in central Mindanao were reported to have displaced almost another 100,000 people.

They are unable to return home because of continuing violence and insecurity. Some have been displaced more than once, and the ethnic minorities caught in the middle of the conflict can be denied access to funds and government support.

Counting the cost: no exact figures on Filipino displacement

Natural disasters and a resurgence of violence have led to a new wave of displacement
While there is no exact number of IDPs in the Philippines, which is telling on its own, estimates suggest that most of these people remain displaced. This is nonetheless down from the height of the conflict, in 2008-2009, when the number was around 700,000.

Some IDPs began to return home in 2011, largely because of a fledgling peace process. But natural disasters and a resurgence of violence have recently led to a new wave of displacement. This displacement caused by conflict often affects the same communities repeatedly, undermining societal resilience and pushing already poor people into poverty.

While the media often highlights the conflict and displacement of Muslim citizens, there is less focus on the effects of conflict on the indigenous Lumad people. Lumads, a term used by the indigenous peoples of Mindanao to describe themselves, are regularly displaced not only by the violence itself, but also because of the politics related to it.

Reports have highlighted the devastating social and economic impact of the conflict on indigenous communities, and noted that the Lumads often refuse to join local defence militias, which leads to suspicions of them being communist sympathisers. This leads to arrests, more persecution and greater violence and abuse. Natural disasters have created a new wave of displacement in the Philippines. Image credit: Photo Unit

Efforts to address these issues within the Philippines have been set in motion. In August 2014, the Philippines House of Representatives approved the ‘Internal Displacement Act of 2014’, which seeks to recognise the rights of all IDPs and provide protection and assistance, no matter the cause of their displacement.

Crucially, the bill recognises the importance of preventing displacement and, where possible, attempting to stop activities responsible for it and providing compensation for those who are displaced. While this is a positive step, questions arise when considering responses to possible state-generated displacement. The Senate was still discussing the bill in early 2015. Once both chambers agree on a draft, it will be sent to the president to sign into law.

Dealing with displacement and exclusion of minorities still needs to be properly addressed
In addition, since the end of 2010, the Office of the Presidential Adviser on the Peace Process has overseen a programme intended to address peacebuilding and reconstruction, that incorporates IDP assistance.The Programme for Communities in Conflict-Affected Areas (known by the Tagalog acronym, PAMANA) is intended to support community-based development and provide a method of bottom-up as well as top-down post-conflict reconstruction.

While efforts have been made towards promoting peace and reconstruction in the Philippines, dealing with the displacement and exclusion of minorities must be addressed. Research on the relationship between underdevelopment, conflict and migration, as well as focused, continued action on the part of policymakers, indigenous advocates and local governments, can help support peacebuilding and assist in creating the structures necessary to provide for those affected by conflict.

Sara Woodward has experience working with and advocating for new refugee arrivals in both the UK and US. She has an MA in Conflict, Security and Development from Sussex University.
Read more from Sara Woodward 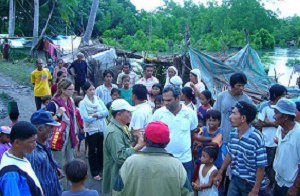