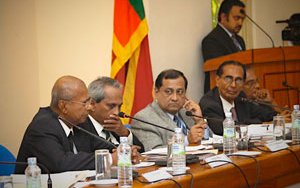 My first job was at a local peacebuilding organisation in Sri Lanka, working as a program coordinator. In 2002, the organisation started a peacebuilding initiative that brought together people of different ethnicities. I travelled from Colombo to Jaffna University in the north of the country to meet Tamil university students there. We passed cities, towns and villages throughout the journey, and after passing Vavuniya, I began to see young and old women sitting beside the dusty road with unpacked tents and two or three children. There were almost no men accompanying them; however, there were plenty of uniformed male soldiers around with weapons. I can still clearly remember everything I saw there. I thought about how the women were going to make shelters by themselves with their children there, and I wondered what would happen to them in the future. I felt like something was missing in these resettlements, and I felt the same way when I read the Lessons Learnt and Reconciliation Commission (LLRC) Report. Later on, I realized that the missing element was ‘gender sensitivity’.

The patriarchal society I grew up in did not train me to think about peace and harmony; but the marginalized femininity of the Sri Lankan culture helped me to connect with the concept of peace. In reading the LLRC Report, I realized that I felt no connection to my mother’s peaceful ways, and there was no space for all those mothers and sisters who were sitting beside the road in Vavuniya.

“The word love has by no means the same sense for both sexes, and this is one cause of the serious misunderstandings that divide them.” –Simone de Beauvoir
In The Harvard Assessment Seminars: Explorations with Students and Faculty about Teaching, Learning, and Student Life (1990), Richard Light argues that the male-oriented education system, structure and pedagogies contribute to exclude women from decision-making. The male dominant knowledge, teachings, politics, war and peace are a ‘regime of truths’ that seriously limit the space for women. Thus, the silencing of gender creates a ‘hegemonic truth’ of masculinity. Joan V. Gallos explains how women and men learn and understand the same fact differently. Women and men see the world differently, so there should be different ways of analyzing conflicts or problems. In the Sri Lankan context, there should be a discussion on how women’s perspectives can be included in post-conflict activities. If there were gender sensitivity in the rehabilitation efforts and resettlements in 2002, I would not have seen those women and children sitting beside the road, surrounded by armed soldiers.

The LLRC in Sri Lanka

The Lessons Learnt and Reconciliation Commission (LLRC) was a commission of inquiry established in 2010 to look back at the conflict Sri Lanka suffered and to look ahead to a process of healing and peacebuilding around the country. The LLRC was expected listen to the grievances with regards to the Sri Lankan civil war and political violence. The LLRC Report came out in 2011 and articulated recommendations and observations of the commission regarding “governance, devolution, human rights, international humanitarian law, socio economic development, livelihood issues, issues affecting hearts and minds, leadership issues and many more.” Mrs. Ramanathan is the only female member of the LLRC. Photo credit: Tisaranee Gunasekara

Despite its earnest objectives, the LLRC fails to consider the status of women as victims or actors in the Sri Lankan conflict. Instead, the male-centered LLRC report represents a masculine and hierarchical regime. As Nadine Puechguirbal explains in ‘Peacekeeping, Peacebuilding and Post-conflict Reconstruction,’ found in Gender Matters in Global Politics: A Feminist Introduction to International Relations, language is key to understanding the power relationships of patriarchies that have consistently neglected gender perspectives for their own benefit. The language that decision-makers use to articulate problems is very important, however, the LLRC report does not reflect this at all. Sri Lankan woman telling her story in front of the LLRC.

Sri Lanka has been called on by international leaders to investigate the incidence of sexual violence against women both during and after the conflict, and there is a high level of international media coverage on this topic. I myself have often witnessed armed soldiers teasing and verbally harassing women in Colombo. According a BBC News article, Human Rights Watch noted that women and girls from the north and the east were subjected to sexual violence as a result of the conflict, and they have reported 62 cases of sexual violence involving the security forces after conflict ended. Considering these facts, it is important for the LLRC to adopt a gender perspective in the Sri Lankan context in moving forward in the healing process.

Yet, several features of the Lessons Learnt and Reconciliation CommissionL are questionable from a gender perspective. First, the panel of experts is composed of one female figure among seven male figures. The sole female member of the panel, Mrs. Manohari Ramanathan, is rarely seen in the news or in photos. She always appears in the corner of the table, which symbolizes the marginalized position she holds within the panel. Second, the design of the LLRC’s inquiry procedure is seriously flawed, because they failed to create a safe space for vulnerable individuals, particularly victims of sexual violence, to tell their stories. The hearings are held in public and often in front of cameras, reporters and strangers. While victim’s information is only published with consent, their grievances are expressed without any confidentiality, which makes it exceptionally difficult for them to feel safe and supported.