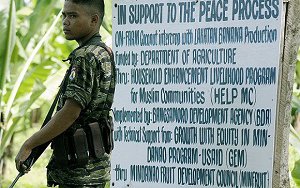 Further clashes between government troops and armed rebels in the southern Philippines signal a need to go back to the drawing board. Image credit: Keith Bacongco
The time is ripe for peace talks between the Philippine government and the NDFP rebel movement
After January’s Mamasapano clash in Mindanao between government troops and the Moro Islamic Liberation Front rebels, all eyes have been on the southern Philippines. Peace activists have been clamouring for the passing of the Bangsamoro Basic Law (BBL) as a way to end the armed rebellion in Mindanao Island and the Sulu Archipelago.

However, we must not lose sight of other conflict issues in the Philippines, involving a nationwide rebel movement which has been struggling against “imperialism, feudalism, and bureaucrat capitalism” since 1969. The time is ripe for the Philippine government and this rebel movement, the National Democratic Front of the Philippines (NDFP), to go back to the drawing board.

Over the last 12 months there has been a spate of arrests of alleged members of NDFP-affiliated organisations, such as the Communist Party of the Philippines (CPP) and the New People’s Army (NPA).

For instance, in December 2014, 15 NDFP consultants were arrested and detained. On March 4, 2015, after the Philippine National Police and the Armed Forces of the Philippines raided three residences in Caloocan City and Quezon City, they arrested 12 civilians, one of whom was an accredited consultant of the NDFP in the peace talks with the Philippine government. And on June 1, 2015, an NDFP consultant was arrested in Cavite.

Human rights groups claim that alleged evidence such as firearms were planted during the raids to justify the arrests. Many were slapped with trumped up charges of murder and attempted murder. These raids, arrests, and the detention of NDFP peace consultants violate the Joint Agreement on Safety and Immunity Guarantees and the Comprehensive Agreement on the Respect for Human Rights and International Humanitarian Law. But many from all sides are hoping for successful talks. The Ecumenical Bishops’ Forum and peace groups have called for the resumption of peace talks between the Government and the NDFP. Even Jose Ma. Sison, the founder of the Communist Party of the Philippines, who is in exile in the Netherlands, says the NDFP is open to resuming discussions.

The trust question remains, however. The military accuses the rebels of abductions, killings, extortion, and IED attacks. The NDFP-CPP rebels accuse the government of coming up with trumped up charges to arrest NDFP peace negotiators, and of focusing only on the Bangsamoro law.

Before any peace talks can resume, confidence building measures have to be put in place. Just and durable peace cannot be attained by using the military might of the armed forces but by addressing the economic, political, and social causes of the revolution.

[more_info_box]For more information on the events above, click on the links below: