The aftermath of war and violence. Image credit: IZEIN ALRIFAI/AFP/GImages

“Local civil society serves as a bulwark against atrocities. Strengthening it is one of the best hopes for advancing the atrocity prevention agenda in the coming years.”

A new report released this week in Washington, DC, affirms the critical role that local civil society plays in helping to prevent, respond, and recover from mass violence, and urges the next US President and Congress to increase support for their efforts.

The report calls on the incoming president to strengthen the work of local peacebuilders, human rights activities and communities on the front line of atrocities
The report was compiled from an in-depth consultation with a group of experts from non-governmental organizations, think tanks, and former government officials. It calls on the incoming Administration to make early prevention of mass violence a high-level presidential initiative, backed by substantive resources, and to recognize and strengthen the work of local peacebuilders, human rights activists, and communities on the frontlines of atrocities.

As a member of the Experts Committee behind the report, I’m honored to have been included in the crafting of this report and pleased to see such a clear emphasis placed on the need to strengthen support to local civil society. With the US elections only days away, this report provides a timely, nonpartisan perspective on how the next Administration and Congress can sustain and elevate efforts to improve the US’s role in helping prevent mass atrocities and genocide. These efforts have a long bipartisan history spanning multiple Administrations and offer valuable lessons to the next President.

The report recommends that the next US administration give greater priority to supporting local civil society
Building on previous work to strengthen policy leadership and increase US funding dedicated to prevention and protection against atrocities, this report highlights more than ever before the important work of local peacebuilders like our partners, who most directly bear the impact of mass violence and are leading efforts within their communities to prevent, respond, and recover from atrocities. Specifically, it recommends the next Administration: “Give greater priority to supporting and strengthening local civil society” with specific funding and policy initiatives.

Can local peacebuilders really prevent mass atrocities and genocide?  Not always. But groups like the Centre Resolution Conflits in the Democratic Republic of Congo have demonstrated the potential for local groups to play a significant role in helping to avert violence and bolster the resilience of communities.  As the Experts Committee report points out, investing in local civil society as a “pillar of early prevention” is less expensive and more effective than late military responses after violence is already underway.  It saves lives and treasure.

In the months and years ahead, Peace Direct will be working to ensure the next US President and other world leaders heed that advice. 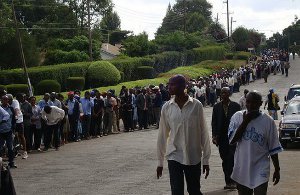