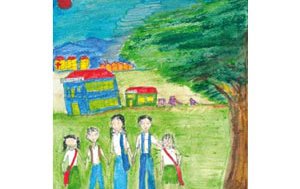 [more_info_box]The Guiding Principles for Young People’s Participation in Peacebuilding was developed by a United Nations & International NGO Network with the help of the UN Peacebuilding Support Office and Search for Common Ground. Additional information can be found here.

What follows is a "youth-friendly" version of the principles. The images alongside each principle were painted by refugee youth from Myanmar and are featured in the book, Forced to Flee: Visual Stories by Refugee Youth from Burma. For more information, please visit www.burmavisionsforpeace.org[/more_info_box]

Peacebuilding is a series of coordinated activities designed to help communities in conflict resolve their differences, build their capacity to repair their broken relationships and promote sustainable peace.

Why involve young people in peacebuilding?

Open to new ideas, flexible and resilient, young people are catalysts for social change. Given opportunities to recognize their strengths, establish goals and develop knowledge and skills, they can help prevent and resolve conflict. When young people are engaged in and support peacebuilding efforts, their communities are more likely to achieve a just and lasting peace.

What are guiding principles for young people’s participation in peacebuilding?

The nine principles described on the next three pages encourage the creation of opportunities for young people to develop a positive self-identity, to learn ways to resolve conflict non-violently and to promote peaceful coexistence in their communities.

Ehnic Shan, 21-year-old Lao Kham migrated to Thailand to live freely. In Burma, he was afraid to express his ideas; independent minds were considered a threat to the status quo.

By acknowledging that young people’s role in peacebuilding is vital, this principle encourages youth to become forces for positive change. Young people’s fresh perspectives can deepen our understanding of the roots causes—and possible solutions—of conflict. Once invested in, young people can support peacebuilding efforts at all levels: social, economic, cultural and political.

16-year old San Lin Htay served as a child soldier to help defend his people, ethnic Karen. His spirits were buoyed by visions of one day attending a school that honored his heritage.

2. Value and build upon young people’s diversity and experiences

A 9-year-old refugee girl living along the India-Burma border, Naom knew of girls around her age, still living in Chin State, who had been pulled out of school and forced to dig roads.

3. Be sensitive to gender dynamics

This principle highlights gender differences while challenging gender inequality. In many cultures, females and males have different roles, aspirations and challenges. In conflict, those differences can be exploited. Systematic efforts need to be made to understand those differences and to include all youth in peacebuilding initiatives, regardless of sexual orientation.

Burman, 20-year-old Hlaing Htet Kyaw belonged to an interfaith youth group. He believed soldiers would wage peace, not war, if they had a chance to befriend “the other.”

This principle aims to identify influential youth and strengthen their leadership skills in peacebuilding. It isn’t always necessary to create new youth groups; it can be more beneficial to a community to identify and empower existing groups. Only when sensitive to youth’s needs and grounded in the local culture can initiatives gain traction and be transformational.

16-year-old Saw Yar Zar recalled the day his village was burned down. Having lost track of his father and sister in the chaos, he was forced to flee across the Thai-Burma border alone.

This principle calls on adult facilitators to create safe and supportive environments in which young people will feel comfortable sharing their stories, environments in which peacebuilding activities unify rather than divide participants. To enable youth to see one another’s humanity, activities need to take into account inequalities among young people and challenge prejudices.

After their Karen village was attacked, 19-year-old Kyaw Eh set out for the Thai-Burma border with other survivors. He said that along with his ancestral land, he left behind his childhood.

6. Involve young people in all stages of peacebuilding and post-conflict programming

This principle encourages the involvement of young people in every phase of the peacebuilding programming process: design, implementation, monitoring and evaluation. Young people can help identify and analyse potential causes and effects of conflict. Institutionalizing young people’s participation can ensure their representation and hold institutions accountable.

A former political prisoner, Nang Tin Tin Mya dreamed that her children would know their rights, think for themselves, be skillful at resolving conflict, and value diversity—all keys to peace.

7. Enhance the knowledge, attitudes and skills of young people for peacebuilding

This principle promotes trainings on leadership, mediation, negotiation, conflict resolution, communication, life skills and positive social norms for young people. Once qualified to support peacebuilding initiatives in meaningful ways, young people can serve as positive role models for younger children while developing a sense of purpose in their communities.

After their mother died, 21-year-old Sai Sai and his four siblings left Shan State for Thailand, to find work. He was homesick for his father’s love, guidance and encouragement.

By encouraging interaction, dialogue and cooperation among children, young people, parents and elders, this principle promotes collaborative solutions to conflict. When adults recognize that young people share their concerns and peacebuilding goals they are more likely to support youth and encourage community leaders to develop long-term partnerships with youth.

Forced to flee his native land, Saw Yar Zar dreamed of a world where impoverished ethnic minority villagers were considered as worthy of human rights as wealthy city dwellers.

9. Introduce and support policies that address the needs of young people

This principle promotes the creation of policies that reflect the best interests of youth while creating opportunities for young people to inform policies that will shape their future. Research on the roles of young peacebuilders and documentation of their contributions to resolving conflicts and fostering peace can influence policy at local, national and international levels.