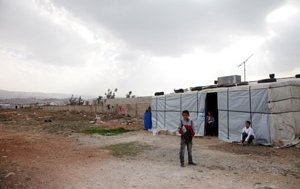 The world wept while watching the body of little Aylan Kurdi float ashore. Many of Syria’s children are "Aylan", they fade away slowly and silently in their homeland or abroad. Few get his fame, they become numbers in the casualty count of ongoing war.

Towards the end of summer, I heard the story of a boy who passed away in a refugee camp in Taalabaya in the Bekaa valley, the area hosting the largest number of registered refugees in Lebanon. He was in his family tent when a bullet hit him out of nowhere. Some local people were shooting in the air at a funeral, and a stray bullet killed him inside what was supposed to be a safe haven. His body was buried in the Lebanese town, far from his country.

The woman who told me this tragic incident, let us call her Rama to protect her identity, received me with some friends in her very modest yet clean and well organized tent. The boys did not care much about the cartoon series on screen as they were politely sitting on ground watching their parents talk to us. Rama was holding her one year old infant. "She was born in the camp", yet the mother thinks her daughter can sense this is not home.

The thin little girl looks sad even at this early age. She might have a darker future than her brothers. According to the United Nations Refugees Agency (UNHCR), Syrian refugees born in Lebanon are particularly at risk. A 2014 survey found that 72 percent of newborns do not possess an official birth certificate, raising concerns over the recognition of their nationality by the Syrian authorities.

Life inside a tent

Days at the camp are long. This summer was very hot and humid, and all they had to cool the place is a small fan on one of the virtual "walls" of Rama's tent. Winter is as hard. The husband pointed to parts of the tent almost torn out due to heavy rain last year. "It is like being in the wild, it gets extremely cold and one has to be extremely careful when using heating devices in order not to burn the place". The kids must shower in freezing water, "that is, when we have running water", he says.

This year, there is an escalating problem in the infrastructure all over Lebanon, partly due to the garbage crisis. With every rain the roads are flooded, even in Beirut. Of course, things are much worse when one lives in a tent that can barely stand in the face of fierce winds.  Rain, sewage and dirt invaded some tents after my visit. They were told a philanthropist stopped paying the expenses of the camp to the land owner. Their tent is no longer free like it used to be, the rent is now $50. Imagine how a family of five can survive with the rest of the money. "We always owe 400000 LL to the grocery store, which is the salary of two months. We pay a little of that sum as we take more vegetables", Rama says.

Asked if they are offered any kind of help, the husband tells us they receive food boxes provided by the UNHCR. Sometimes they get it monthly, at others once every three months. It contains canned food such as hummus, beans, tuna and pasta. It does not include bread or milk, nor diapers and children needs.

Rama, who used to be a teacher, does not dream of Europe and still thinks of her homeland. She says, "Had we been able to continue to work and earn our livings in Syria, we would have stayed despite the danger. Look around, does this look like a place where I want my kids to grow".

Yet her children are more fortunate than their neighbours who don't even have a bed. A newborn sleeps on a quilt on the bare floor, with no toy next to her. Her father earns even less than Rama's husband. Lebanon, stuck with political deadlock and a poor economy, did not officially authorize the establishment of big camps in fear of legitimizing a permanent stay of the refugees
More than one hundred tents are in this camp. The inside differs depending on the financial status of the occupants. And each of the few camps in Lebanon is different from the other. They are not well equipped and generally safe like the Zaatari in Jordan which has become a mini Syria in diaspora and a new unofficial city on Jordanian soil with everything inside, from clinics to wedding venues.

Unlike Jordan and Turkey, Lebanon, stuck with political deadlock and a poor economy, did not officially authorize the establishment of big camps in fear of legitimizing a permanent stay of the refugees, which is the case of the Palestinians in the country. Thus many Syrian families rent houses. Life there is not easy, though better than being in a tent.

Farida, a widow from Darraya, lives in a two room house with her three children. Shortly after the massacre in her hometown, they moved from one city to another, sometimes they were 20 people in a small room. After escaping death in one shelling, she decided to come to Lebanon. She brought $2,000, it was all she had, but this was quickly spent. The family has no income and depends on the help it gets from different sources.

Being a single mother and a refugee is a hard task. A charitable organisation affiliated to a religious Sunni party is supposedly supporting her. Yet all she gets is the occasional food box and coupons to buy clothes. She was asked twice to write a thank you letter to her "sponsor". Farida didn't say it, but one can read it in her eyes. This practice is outrageous, humiliating and unjustified, especially as she is not assisted in paying her rent or sending her children to school. "All they care about is how well my kids memorize verses of the Koran".

Farida married young and had to quit school. She struggles to provide a good education to her children, all on the honor list with excellent results. Last year, she managed to enroll them in a private school. At first she received help with the fees, but that soon stopped and fees rose 40 percent. Only the elder daughter goes to school now, her sister and brother stay at home, bitterly wishing they could join her. Despite their promising performances, the school refused to grant them a scholarship. Many parents face the same dilemma. Over the past year, some 6,000 families were forced to withdraw their children from school.

Sending children to school is one of several problems Syrian refugees face in Lebanon. The curricula are different, and not every Syrian child is fortunate to get enrolled at a Lebanese public school.

Education in Lebanon is mandatory, but not free. Parents have to pay the equivalent of $60 per child a year, in addition to the cost of books and stationary. This school year, the Lebanese government and international donors cover school costs for Lebanese and refugee children. According to the UNHCR, this allows 200,000 Syrian refugee children aged between three and 14 to access certified basic education, nearly double the 106,000 children reached last year. Despite this increase, around 217,000 Syrian refugee children remain out of school.

Moukarram, a Syrian refugee, was told there are no places for her daughter and son at a public school next to their house. She says the daughter wept when she knew that a cousin who still lives in Damascus is able to go to her classes. She urged her parents to take her back to Syria. Unfortunately this is not possible. Her father had lost everything he owns there and takes whatever low-pay job he can find to support his extended family and ailing parents, all in Lebanon. Salwa teaches English, both in a similar centre and a mini school in the camp I visited. The classrooms are prefabricated containers. As the place was once funded by an Arab sheikh, religious teachings were implemented and art forbidden. Salwa thinks this made the children more reserved than those at the center funded by Syrian volunteers, where the pupils have some recreational activities. But here and there, they carry deep sadness inside, talking about a dead relative, an abandoned house or farm, and a tough life far from home.

Mahmoud is a political activist who entered Lebanon illegally after spending months in a notorious Syrian prison where he witnessed the death of his bother. As the fate of another sibling is still unknown, he spends his time documenting violations of human rights in Syria, collecting photos and evidence. His residency here is expired and he fears deportation. That would be a death sentence as he is wanted for a retrial on "terrorism" charges. However, being in Lebanon is costly and his ailing body still carries signs of torture making it hard to earn a living in construction like most men do.

Mahmoud hopes to find a way to Europe, but he wants it to be legal to take his wife-to-be and mother along. The UNCHR is well aware of his situation and that of his family, but he is disappointed because "they offered me to go to France and asked my mother and fiancee to remove their veils in the official pictures needed for the legal papers. We were also told my fiancee cannot get enrolled at a university if veiled".

As I listen to him talking about the little options he has, I feel sorrow. He gave a lot for the dream of a free and democratic Syria, and there is no way back for him. I remembered two friends who went to Germany and the Netherlands long before the current influx of refugees towards Europe. Like him, they risked their lives in opposing the Assad regime. Were all those sacrifices in vain?

While Europe has become the target of hundreds of thousands of refugees, Syria is still the ultimate dream of many others. A bittersweet one.
This is a question I didn't dare to ask to another family I visited. They have no income, the father, Ahmad, is too old to endure the harsh work conditions.  He lives with his wife and two daughters and an adorable grandchild. They share the house with two other families, and the rent is covered by the UNCHR for only six months.

Unfortunately, they have to leave the house soon and have no idea where to go. They can't afford to rent a place on their own. The daughters speak of Europe, the wife wants to stay in Lebanon, to be closer to a son who is still in Syria, unable to escape.

Some of their relatives took the risk of fleeing to Europe via Turkey and Greece, and then the long road to the unknown. The cost of such a trip is $2,500 per person. Ahmad does not have a penny of it. Even if he did, it would not interest him. Despite losing almost everything in Syria, he dreams of going back to work in a field. While Europe has become the target of hundreds of thousands of refugees, Syria is still the ultimate dream of many others. A bittersweet one.

Latest from Lebanon and Syria →