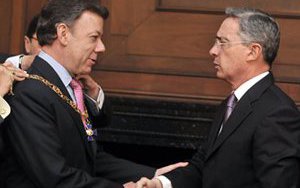 The Colombian conflict is the world’s longest running civil war. It is a war fought between armed guerrilla groups formed in response to deep social inequality and violent political exclusion and a Colombian State protected by an Army which was demoralised in the 90s but rejuvenated by billions of dollars of US military aid. It is also a conflict that has seen the expansion and consolidation of para-state armies created by elements within state institutions and private businesses and responsible for targeting civilian activists who dare question the ruling economic or social order. The guerrillas remain strong in rural Colombia, the Colombian Army maintains the technological advantage, and paramilitaries continue to act with almost total impunity.

According to a recent government-backed study the civil war has left at least 220,000 dead. Over 80% of those killed have been civilians. A horrific figure. And even more horrific when one considers that the guerrilla groups, demonised and listed as terrorist organisations by the United States and the European Union, are together considered to be responsible for no more than 30% of the deaths. The Colombian state, a close economic and political ally on both sides of the Atlantic, is involved in over two-thirds of the killings, either directly or implicitly through its collusion with the para-state armies.

But whilst war has raged as a constant, there have also been numerous attempts at peace. In the 1980s a peace process with the largest guerrilla group, the FARC, led to the creation of a political party and the demobilisation of a not insignificant number of guerrilla fighters. But this was short lived as the state and paramilitaries combined to kill thousands of members of the party, most with no connection to the guerrillas at all, including two presidential candidates and numerous elected officials. Another attempt was made between 1999 and 2002, when a huge extension of territory was turned into a demilitarised zone to allow for talks to take place. But again the talks failed as the ongoing confrontations elsewhere in the country, and particularly the intensification of paramilitary violence, did not give space for mutual confidence to build between the negotiating parties. The talks were abandoned when the FARC hijacked a plane, forcing it to land and taking a Senator hostage.

Ten years after the dramatic collapse of the last talks, a new process was begun in 2012 and this process continues today – it is unsurprisingly dominating Colombian politics and is starting to foment ever expanding hope that an end could finally be found to the Colombian armed conflict. It is considered to be the most serious attempt ever to bring peace to Colombia.

Whilst Santos receives plaudits internationally for his continued commitment to the peace process, and he should indeed be encouraged to maintain that commitment, it is grassroots peace organisations that are the true torch bearers of this peace process. It is they who have been developing ideas, working in communities and pressuring the politicians for peace long before “talking peace” became mainstream. Indeed as Defence Minister, Juan Manuel Santos presided over a period characterised by the most severe atrocities ever committed by the Colombian Army whilst at the same time anybody rejecting a military solution to the armed conflict would likely be accused of collusion with terrorists – many peace organisations were treated as such. Unfortunately, in contradiction to the positive steps taken to initiate the peace process, Santos’ policies towards grassroots organisations have in practice offered little change from those of his predecessor. His economic policies still fail to take on-board their concerns and there continues to be a considerable lack of progress on the human rights front. Last year saw more human rights defenders killed than for any other year in the past decade, whilst members of the Santos government continue to accuse legitimate protests of being organised by the FARC, and political opponents continue to be put in prison on the basis of flimsy evidence and trumped up charges. There has been an important change in discourse from Santos, but this must be transformed into hard policies if Santos is to demonstrate that he is committed to ensuring that the peace process goes beyond a mere cessation of hostilities and actually provides the framework to promote a more socially and politically inclusive Colombia.

In confronting some of the most reactionary forces inside Colombia’s institutions, Santos has undoubtedly taken a bold and important step. To ensure that this moment of such historical importance for Colombia does not become another colossal missed opportunity, it is now essential that Santos and his second term government provide all the necessary guarantees to grassroots organisations and ensure that their views are included inside the mainstream political framework. Santos has followed their lead in initiating a peace process; he must now further distance himself from Uribe and listen to the demands and proposals coming from the grassroots. It is from there that he will find the solutions needed to address once and for all the deep lying causes behind this incessant war.